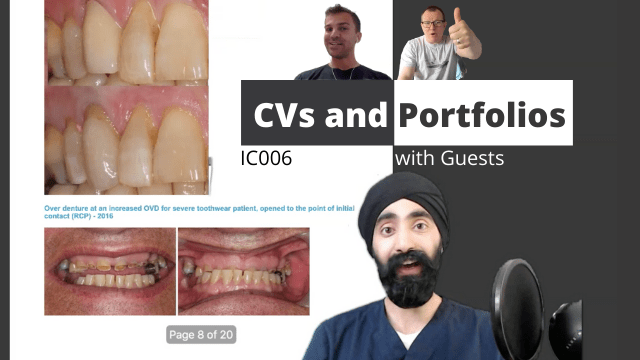 I was so happy to get feedback from ‘Finding An Associate Position‘ interference cast episode. What you asked for was some more direction on Portfolios, and that’s exactly what this episode sets out to do!

As well as showing my own CV (it does not need to be too fancy!) and Portfolio, I tap in to Barry Oulton’s experience of hiring – what does he look for in an applicant?

Alan Burgin (@the.cornish.dentist) and I also chat about our journey and the gradual process of organically building your portfolio (it was a snippet from an episode yet to be released).

I echo in the episode that all these things are just to secure your interview – really what matters most is your emotional intelligence and your attitude.

If you know a DF1 that would benefit form this advice, help them out by sharing this podcast with them!

Opening Snippet: Don't think that you're the bee's knees, and the be all and end all, what you're doing is you're reflecting back, because, you know, we do need to reflect. And so demonstrate the reflection, demonstrate that there's the humble and that you are looking to improve things...