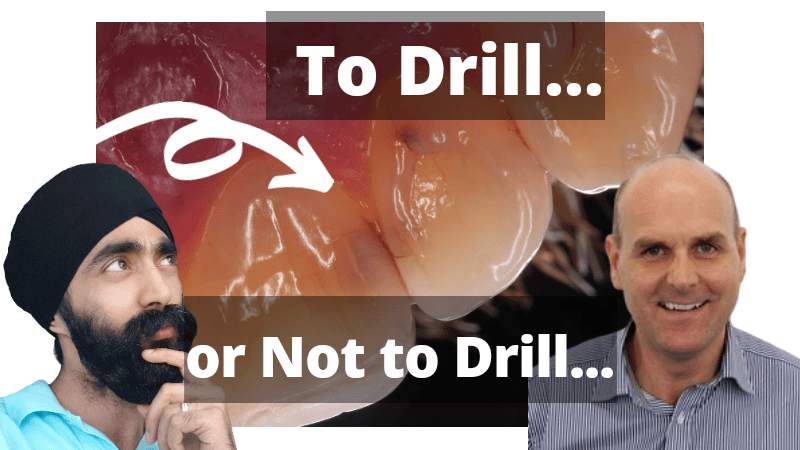 Many Dentists still believe that caries in to dentine on a radiograph automatically means they need to start drilling – why might they be wrong?

Remember that case I posted on my FB and IG page some months ago? It had SPLIT our profession down the middle as to whether you should drill those carious lesions or not.

Well, I asked Louis McKenzie about this case, as well as about caries detections systems and WHEN we should be picking up the drill?

Why should use a caries detection system (such as ICDAS)?

Which is the best system?

We share THAT case – the one that split the opinions of THOUSANDS of Dentists – find out what Louis would have done!

Find out what I DID end up doing!

What about cracks? Does that count as a ‘cavitation’ and therefore warrant restoration?

We discuss a classification to describe radiographic caries.

www.rbbmasterclass.com for the full online course – use MAY2020 before 31st May 2020 to get a discount!

Opening Snippet: If there's just one IGtv or YouTube episode that you watch on this podcast, in all of your existence, make it this one. This is all about to drill or not to drill, because frankly, I believe that many, many dentists all over the world on drilling caries too much, too often, and they should stop now...

Jaz’s Introduction: Hi, guys I’m Jaz Gulati, I will not keep you or bore you any longer. I won’t go straight to the episode with the legend that is Louis McKenzie. The story behind this episode is that some months ago, I posted on the two main UK dentist Facebook groups as a UK Dentist and For Dentist, By Dentist and I post some photos of anterior caries. And I got around about I think 5000 dentists in total to actually view it according to stats I have, and 1500 or thereabouts engagement, so people actually clicking on several comments, and it split the nation down the middle. Half of you wanted to drill the life out of these legions, half of you want to slap on some fluoride and review it. So we’ll find out what Louis McKenzie wanted to do was because he was anti lesions, approximately the crack line there. A lot of you are itching to get your handpiece out right now while you’re watching this. But you know, it’s a fun. It’s a fascinating topic really is. So I’m really happy to have Louis on. Please join us for this full episode on to drill or not to drill. The answer is around about somewhere halfway, if you want to skip straight to that, but why would you? There’s so much useful stuff that Louis McKenzie shares with us for caries detection process, and so much more insight and into the complexity of when or when we shouldn’t be drilling into teeth. The Protrusive Dental Pearl I have for you is something that I borrowed from Louis McKenzie, and it’s on my course, the resin bonded bridge masterclass, which, by the way, on the 31st of May, is going up to $90, or after the 31st of May, before 31st of May if you use the code may2020, it’ll give you $68 off so it’s $22 only, I’m doing this a lot for charity because a lot of the money is going to charity and the rest of its fees, ads I’m doing basically it’s my way of contributing for lockeddown. And I’ve already had some great feedback people who said it’s perfect for E-learning people who have messaged me to say that it’s made RBBs very clear for them. I’m so pleased to hear it. I personally do think after spending weeks on creating this course that it is the best value CPD you will do the entire lockdown period. So if I’m wrong, I’ll give you a money back. That’s how confident I am. So please join me on the RBB masterclass The website is rbbmasterclass.com And the pearl I have for you is that sometimes if you’re doing an immediate resin bonded bridge, I’ll just show you a few slides from from the course itself. When you’re doing an immediate, you’re taking a few risks, you’re taking a few aesthetic risks, and a few technical risks, so what if your lab work doesn’t quite come back as you want it? And you’re going to be removing a tooth that day and placing the bridge there. So your lab work needs to be on point. So that communication aspect comes in. And the other aspect is the aesthetics. What if the aesthetics are not ideal, and then you’re going ahead and placing this bridge? Well to overcome the risk of the aesthetics, ie the shade match of the bridge pontic not being ideal, or the shape or morphology not being ideal for the day that you’re going to fit the immediate resin bonded bridge, you can do a split pontic. So here are some photos that Louis gave to me, to as part of my online lecture on resin bonded bridges, on the split Pontic technique. And basically what you do is you request a laboratory to make the framework as normal. And on top of the framework, there has been some composite placed as a core, and then you get a separate Pontic, ceramic Pontic that actually can bond on to the composite core. And the benefit here is that you can check the fit of the framework and obviously bond that on and then you can check whether you’re happy and the patient’s happy with the shade and aesthetics of the Pontic. Because if the patient is not happy, then all you need to do is cement the Pontic in with a temporary cement. But if you’re happy you’re going to go ahead and follow your adhesive protocol which we discussed on the course. So the split Pontic technique is really good for immediate resin bonded bridges on patients with high expectations and high smile lines. So that’s one of the pearl I’m gonna share with you today. So let’s jump straight to the episode now with Louis McKenzie all about to drill or not to drill caries, when and why?

Main Interview: [Jaz] Today is not I mean, today is not about sexy composite, veneers aesthetics. This is something that needs to be more Instagram rather than that sort of stuff. Because on the social media platforms in dentistry, this is a massive, huge daily topic.

Jaz’s Outro: Thank you so much for watching all the way to the end, please do support the rbbmasterclass.com course I really appreciate to have you on. Subscribe on the YouTube or the IGtv. If you’re watching an either those platforms, or if you’re listening, you might want to go back and check the video part to see what the lesions look like that we’re talking about. Anyway, catch you in the next episode. Thanks again. Thank you so much for listening.