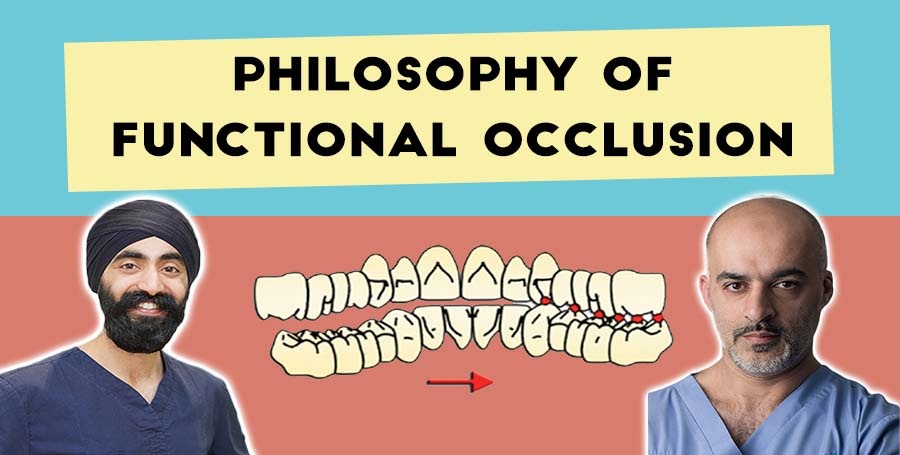 Canine guidance is overrated. Read that again. Crazy, I know. In this episode, one of my mentors Dr Riaz Yar explains the rationale of a functional occlusion whereby the pillars are the central incisor and the first molar.

I found some similarities to the Posterior Guided Occlusion (click to listen to the episodes by Dr Andy Toy) in that we place too much emphasis on canine guidance.

There is no joy in mediocre Dentistry

I hope you find this episode stimulating – and if you are a true protruserati, you will be grateful for another point of view AND NOT be upset that we all can’t agree with each other, haha!

Did you miss out on SplintCourse enrollment? It will be relaunching in June – click here to register for the launch offer

Check out Dr Riaz Yar’s courses here – his book will also be launching in Q4 2021 – watch this space!

If you enjoyed this episode, check out Posterior Guided Occlusion with Andy Toy!

Opening Snippet: I just couldn't get it out of my head. It took, you know, years and years of reading and reading and reading. I just, it just never comfortably sat in my head. And so there was always this niggling doubt and it always hit me when someone asked me a question, you know, and the biggest question that always got me. If the canine tip's well, why would you give them canine guidance again?...

[Jaz] Riaz Yar, welcome to the Protrusive Dental podcast. How are you my friend? [Riaz]
I’m fine. Thank you, buddy. I’m great. Just Yeah, thank you for the invite. Excited to do after you’ve had some really great people on here. So thank you for the invite. [Jaz]
No, absolutely. I mean, you’re someone who really set me on the path for enjoyment of the topic of occlusion. You may not remember this, but it was 2013. And I think our first or second study club was with you in London. And I’ll never forget the first one minute of your lecture. I don’t know if you still do this. You have to tell me if you still do this. But do you remember what you did in the first minute of the lecture? [Riaz]
No idea. I can’t remember. [Jaz]
Okay, the first lecture, you just stood up in the middle. Okay, and you played a song, and you just got everyone to listen to a song for 60 seconds? Or there abouts? And then you say you sort of justified it saying that this song reminds you of university and it pumps you up? And it was some heavy metal song. Do you still do that? [Riaz]
Yeah. I’m planning on it. With [inaudible] [Jaz]
Is it Metallica? [Riaz]
No, no, no, no, it’s freedom by It’s freedom anyway. [Jaz]
It’s heavy rock,right? It’s a heavy metal. I remember I had to.. [Riaz]
No, no, it’s actually not rocket fuel. It’s actually it’s very much, I’ll get it here. it’s rare. It was the album was Rage Against the Machine. [Jaz]
Okay, fine, right. But I remember you playing the song. And I was like, Wow, that’s so unique and so different. So I’ll never forget that lecture for that reason, but also because of the impact you had in that lecture. I mean, that was I believe on the topic of TMD and occlusion at that time, and you made us realize how little we knew the anatomy of the temporomandibular joint that year in a strike fresh out of dental school, and no one was confident in the anatomy and you really brought that home, and then you really play with our minds, whereas you really, you know, made us think hard about occlusion so I never thought forgot you and I’ve been privileged to able to be in some of your lectures. So, it’s a testament to you as an educator. It’s fantastic to have you on for that reason. [Riaz]
No, thank you. Do you want that you want to listen to rage against the machine again, don’t you think? [Jaz]
Okay, I’m with you. Okay, fine. Perfect. Is that bond patrol, what’s the song name? Did you get it? [Riaz]
Radio. Freedom. [Jaz]
Freedom. Okay, freedom. Okay, there we are then so. So everyone you know, Riaz is sort of a treatment planning song. So that’s playing in the background as you’re treatmemt planning? [Riaz]
Yes. So basically, that was with dental school. You know, literally, when we left dental school, it was that moment of freedom. You know, we literally were like, okay, shackles of dental school are done. You know, I don’t need to pick up a book again. You know, it was like, literally, I mean, I that’s how I felt I literally was like, I am not touching a book again. Now. It’s just to practice. And you realize very quickly, how little you knew. [Jaz]
And you know, looking at you, you did a speciality program in prosthodontics. Right? So you did some special training in prosth? [Riaz]
Yes. So did, I sort of, I was gonna do my maxfacts initially. So my plan was maxfacts, they were not qualified. And I was working as an anatomy demonstrator while I was working in practice as well, that was working in Sheffield doing nothing enough, or maxfacts, that’s it. And then I got married. And then that changed that idea could have like, literally, I’m looking to see if I do Maxfacts. And so therefore, you know, I’ll just do then I’ll just do general dentistry, which is fine. You know what? So bought a practice in 2003. NHS practice. One thing that frustrates my mother the most is, I can’t sit still, you know, literally, you know, I’ll buy a prac. I’ll do something and then I’m bored. And then she like, you just are you get bored so easily. Literally, I think I did it for two or three years, and I was bored or thinking I want to do next. And so what happened was I joined I did Paul Tipton course. [Jaz]
Okay, cool. [Riaz]
Yeah, In Paul Tipton. He doesn’t realize it. But he, you know, and this is not actually criticism of it. He made me realize that was not the way I wanted to learn. So I sort of I did is caught on that, you know, I thanked him for it. Because I thanked him for the fact that actually, that wasn’t the way I wanted to do my dentistry anymore. I’ve been learning why it’s not about his work or what he does. It just wasn’t the way I wanted to do. Learn doing courses here. So I wanted a structured pathway. So then I sort of worked my way to get onto a training program. And that was it really. [Jaz]
And then it didn’t stop because you’re always doing extra things. And recently, I saw something pretty spectacular. You did Professor Zhu Kelly’s, like very coveted, very privileged, soft tissue program. Is that right?

Unknown Speaker
Yeah, masters. I saw the Kelly lecture at the EAD the European Academy of aesthetic dentistry. And he comes on. And just before him, there was a lecturer who talked about bone augmentation. And, you know, beyond all to do with implants. So this little Italian guy comes on, and he’s not tall, but he’s manly, the fiery and he comes on, and he is just like an angry man. Start giving this lecture. And then every sort of every sort of five or 10 minutes, he just stop and go. It’s not about the bone. It’s about the soft tissue volume. And I actually to crack me up, and I just thought that if you I want to learn from and literally his last slide was we decided to run a masters. And I said, so I took the detailed down emails straightaway, they said, you know, nothing’s happening for a till six months after so. But you have to go through quite a stringent sort of process because it’s in belong. Yeah. You want to submit all your qualifications and all these sort of things. And it takes a while. But anyway, I was the only prostho guy on there, because everyone else was, which was good. It was interesting. Because you know, I found the important

Jaz’s Outro: Thank you so much for listening as always, all the way to the end. I really appreciate it always. Hoped you enjoyed and gained value from Riaz. I think what he’s done to advance studies in occlusion and helping us dentist understand over the years is just amazing and phenomenal. It’s one of the reasons that why on the splint course, one of the first few slides are having a splint course there’s a photo of him, as well as many other dentists who inspired me to learn more about occlusion and made me better at delivering splints, and maybe question the why, the how, the when of splints. So Riaz is definitely in that category of these inspiring dentists. That meant a lot to me in my journey. I’ll catch you in April which is straightpril, and we’re going to talk all about orthodontics over the next month. I hope you enjoy. Reach out to me on @protrusivedental and it’d be great to connect with you all. Enjoy Straightpril!