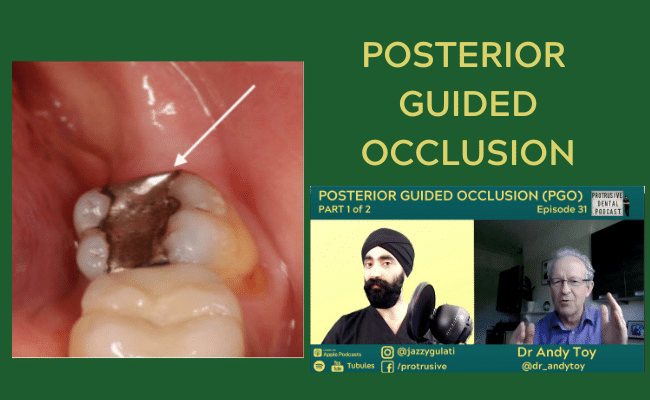 Do you worship canine guidance?

I think I went through a phase where I placed a very high importance on the presence or absence of canine guidance. I then got thinking…how and why are my patients with AOBs doing just fine? Why is it that some studies suggest that only 5% of the population has canine guidance, and others suggest up to 60%? Is group function really the villain?

This is why I am open to listening to theories that explain this. Posterior Guided Occlusion is one such theory. I am joined by Dr Andy Toy to explore PGO concepts I wanted to delve deep in to PGO – so we split this episode in to 2 parts.

What we cover in this episode:

Opening Snippet: Know what goes there's no evidence for this stuff that we're doing really, if you get down any sort of textbook like Dawson, right? Sitting up there, you go to the end of the chapter masses of references. And I had learned to look at those references in. Well, you know, they weren't nothing...

Jaz’s Introduction: Hello, Ron and welcome to another episode of Protrusive Dental podcast, a very special episode, something very different. Do you believe in canine guidance? It’s the first thing that we’re taught at dental school is the only thing that you remember about the occlusion aspect of dental school. Whereas having been to many occlusion courses, and then championing the role of canine guidance, I did always think why is it that some of my AOB patients are just fine? Why is it that some of your patients in fact, most of your patients, according to some studies, do not have canine guidance? And why is that okay? I think we’ve covered it a little bit in some of the episodes with Barry Glassman before, but I want to bring something completely different to the table. So today, I’m joined by Dr. Andy Toy, who is a fantastic dentist and mentor, based in Nottingham. He is an educator for Invisalign, and he treats TMD, does orthodontics and he has a massive interest in occlusion, hence why I connected with him. The story about Andy and you’ll hear his story throughout is very fascinating how he did all the traditional routes of occlusion was also in favor of the traditional mainstream sort of knowledge about canine guidance, and then how he met some people, and how he also considered that they may be another way to think about occlusion, that might be another theory that we should consider. And that theory is the PGO, which is posterior guided occlusion. So imagine everything you know about occlusion, and turning upside down. And then thinking, whoa, I mean, this blew my mind when I first came across it. So I want that as part of the handout of this episode, I’m gonna leave Andy’s ebook about PGO for you to read, because it’s a two part episode. Part one, this one is more of the introduction how Andy had done all the other occlusion bits and bobs, and then learn about PGO, and then we talk a lot, we get a little bit deep into the PGO and I leave you in a bit of a cliffhanger. Sorry, not sorry. And next episode, we’re going to get into how to actually apply PGO concepts, not patients, and how to actually make it practical. The Protrusive Dental Pearl I have for you is a communication one, what about when you get a patient and maybe you’ve seen this patient a few times before. And their oral hygiene is just not up to scratch, they still have plaque at the ginger margins, and you’re not 100% happy? How did you communicate your patient? Sometimes it’s embarrassing to as a dentist to say to a patient, I look you know, you’re not doing a good job, especially when you know, they come in, you have a nice chat with someone you’ve been seeing for quite a while. And then to put like a negative twist on the appointment and say, Look, I’m not happy with your oral hygiene, which we have a responsibility as clinicians to do. So I think there’s a tactful way to communicate that to a patient actually, you need to do a little bit better in a you know, keeping politeness and kindness and sincerity at the core of it. So my Protrusive Dental Pearl is that if you want to tell a patient that they need to improve something about their oral hygiene, here’s what I like to do. I like to ask their permission, and it works every time. So I say to a patient, may I kindly have your permission to give you some feedback about how your cleaning is going? Or May I kindly have your permission to give you some feedback about how your brushing techniques are going? And always like Yeah, yeah, fine. Yeah, please tell me I’m really interested. And then you show them in the mirror that look, you’re here, here, here, you’re doing amazing. Please keep this up. I’m really, really happy with this. But can you see around the lower anterior as you move the lip out of the way, and then you see all that mature plaque that they were missing for probably weeks and months. And then you show them look with a probe and you lift off the plaque. And I’m just concerned that you’re missing this plaque. And you probably haven’t realized it’s probably because of the fact that it’s so low down, your toothbrush just not reaching and just want a small change in technique, we can get your gum hygiene from 7 out of 10 to 10 out of 10. And they are so so appreciative of having advice given to them in this way. And it’s much better than saying look, your general dental checkup today was fine, but you need to do better with your tooth brushing. It’s not only more specific, but the fact that before giving them criticism, you allow them to give you permission. I think that’s really powerful. So let me know what you think about that. Anyway, I’m not gonna take any more time let’s join the episode with Andy Toy on posterior guided occlusion part one.

Jaz’s Outro: So that’s quite heavy stuff. I hope you enjoyed some Andy stories of the origins. Next episode, we’re going to go really deep into PGO. And we’ll also talk about how Andy applies PGO actually clinically, to his patients and what he’s looking for in his Invisalign patients towards the end of the treatment protocols. So I look forward to catching you for part two of PGO.