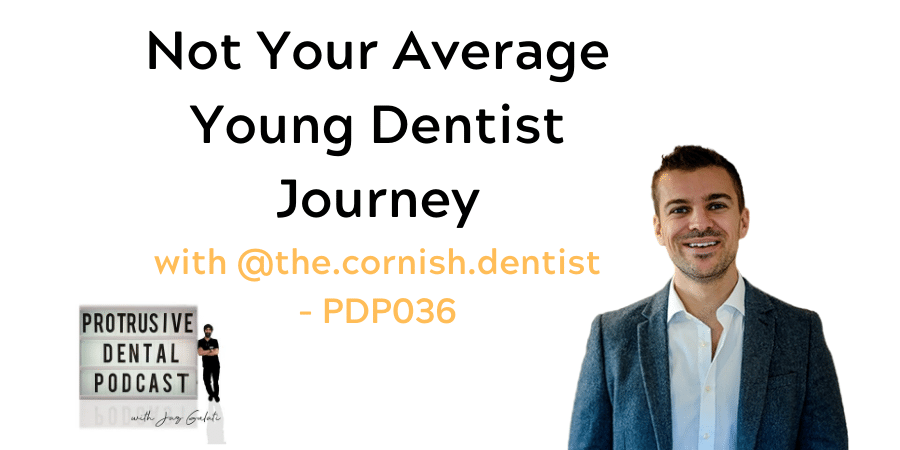 In this episode we listen to Alan’s story. His name is Alan Burgin and he’s also known as The Cornish Dentist on Instagram.

His story involves themes of mentorship, challenges, overcoming adversity, gaining a work life balance, (so actually going abroad to Australia for six months)….I don’t give too much of the story away, but it involves so many real-world themes. And actually, it also involves a bit of luck and something that we touched on in Episode 34 with Richard Porter on emotional intelligence was the element of luck in your career trajectory is actually very important.

The Protrusive Dental Pearl is about how to make cementing crowns less messy using Vaseline!

I hope you enjoy listening to our reflective chat! NEXT MONTH will be Splintember! I will cover all things dental splints to simplify this confusing area of Dentistry.

Listen to the FULL episode via direct download or via the following platforms:

Opening Snippet: Yeah, so probably the biggest thing I've learned about bigger cases in private practice is a lot of people say about getting to know your patient. And I've had a few cases where I've moved into they didn't need much doing initially, we've been able to move into the sort of full mouth stuff quite quickly, and haven't got to know them at all. And it doesn't mean just you don't have to sit and chat with them for ages. But now I'm much more structured in my treatment approach in that I will do a stabilization phase and then a definitive phase...

Jaz’s Outro: So thank you so much as always for listening all the way to the end. Join me for splintember. I think I’ve got got a couple more episodes for August coming out some good ones. Next one being on personal branding. We’ve got Shaz Memon from Digi max talking about personal branding, should you have a website as an associate? Should you have a logo? Do you have the audacity to have a logo and you only one year qualified? We’re gonna be talking about this sort of stuff. And don’t worry, the answer is not very harsh at all. So we are going into deep into websites and that sort of stuff. So join us for Next Episode and of course splintember in September, which I’m really looking forward to. Thanks for those of you who’ve signed up for the waiting list on occlusion2020.com we’ve got a few non people there will be contacting closer time and have an awesome week guys. Thanks for joining me