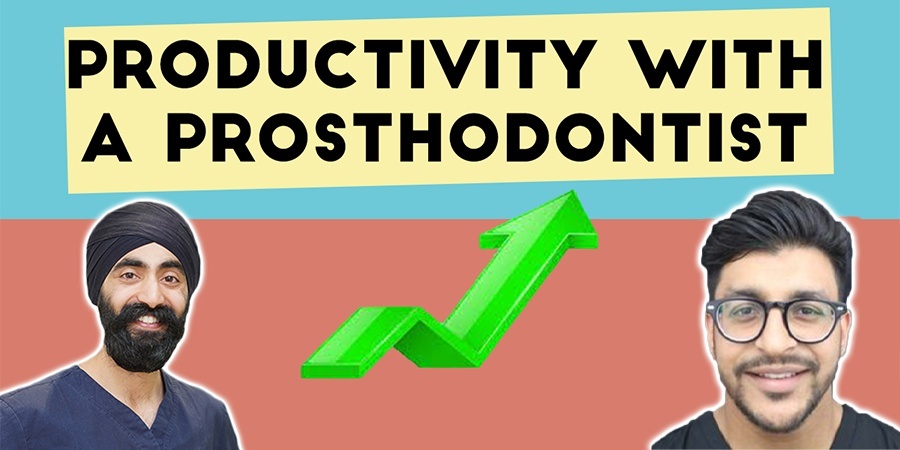 Productivity with a Prosthodontist – PDP072

Dentistry is busy. How can we make sure that we live a balanced and fulfilled life in our hectic profession? As an associate, I am already struggling with time, I often wonder how practice principals and specialists play this game?! I am joined by my dear friend, Dr. Ricky Bhopal Specialist Prosthodontist to discuss how we work smarter and not harder.

If you enjoyed this episode, you will enjoy How to Win at Life and Succeed in Dentistry!

Opening Snippet: The way what you want in life changes. So you just have to listen to what you want to do as opposed to looking at other people who may be doing nine to five days or working six days a week or if you're crazy enough to do seven days a week. So it's just whatever you find comfortable for yourself. So, which goes on to my first point which is getting true with your, with your mind and your body. What are you capable of...?

Jaz’s Introduction: Are you feeling just a little bit overwhelmed at the moment like one of my friends dentist, he said to me that I just wish things would just slow down like after the lockdown. After everything that happened during COVID when we experienced some sort of anxious tranquility. I feel as though now things are getting really busy for us and a lot of us are experiencing that huge dump to being overwhelmed and burnt out. If this is you, it certainly hasn’t me in many moments. And that’s not just because of the podcast right now that there are so many things in life. We try our best as dental professionals, as family members, as friends and colleagues to make everything work. And in such a busy life things can get really really hectic. Hello, Protruserati. I’m Jaz Gulati and welcome to this episode entitled productivity with a prosthodontist with my good friend Ricky Bhopal, because I wanted to learn myself like how does Ricky who’s a young associate recently qualified specialist prosthodontist. I look up to him as someone who is just full of systems and tricks and wisdom and knowledge in terms of how to live a fulfilled and productive life. I think now, we need to stop working so hard and start working smarter. So this episode is very much focused on getting that connection between mind and body, but also strategies to help improve your workflow, how to fit in those treatment plan letters that we’d write to our patients how to make sure we make time for our loved ones. I loved it when Ricky covered that actually. So this episode, I’m hoping to be very useful for all of us in terms of being able to enjoy life more, but also get more done. Before we jump into this, what I hope will be a very impactful episode for you is the Protrusive Dental pearl, the one I’m showing you today is an add on of the previous pearl I’ve shared which is the otter app. So the otter is the website is www.otter.ai. And what this is, is a transcription service. This is not sponsored, I don’t get anything from this, this is just me sharing something that’s really working for me. So as you know, some of you know that I do some virtual consultations or invisalign and smile design consultations, just to see who’s suitable and who’s not. Because there’s no point of seeing someone who really needs a full examination to come to see you in the practice for a Invisalign consultation as a waste of chair time. So I find the system of Invisalign consultations, very useful. Now, while I’m having these consultations, I’m recording the video on zoom with the patient’s permission. But also, I’ve got otter.ai running in the background in my Chrome tab. And what I’m doing then is I’m having that conversation, the patient, I’m asking about their goals, I’m giving them information, how much money is likely to cost him how many months the treatments gonna take importance of retention that kind of stuff. But as we’re having this conversation, everything that we’re discussing is being transcribed to a pretty, I’d say 95% accuracy. And obviously, with dental terms, it struggles, but I literally don’t have to write any notes. I don’t write any notes for my virtual consultations, but you should be right, we should be writing notes. But my transcription is my notes. So I just email that over to my clinic. And they put it in the contacts of the patience. So therefore, I now have a full like transcription of the entire conversation I had with the patient. So I don’t know about anyone who’s doing this. Hopefully, some people will start doing this now that I’ve told you about it, but a system that works well for me, so I don’t have to then log into my sort of system and then start writing everything that we discussed with the patient. I can now just send over the transcription. So I hope that pearl helped you. So let’s dive into the episode with Ricky bopal. I’ll see you in the outro.

Jaz’s Outro: Thank you so much, everyone, for listening all the way to the end. I hope you found value from that. I hope you can take something away from that as an actionable step that you can do tomorrow to make your life more productive, make it more fulfilling, and get more enjoyment out of life. And remember, life is not a race. It’s a journey, right? You won’t be happy when you can start placing all on four you won’t be happy, then you’ll be happy now. Now is the time for happiness. So thanks so much for joining me. Check out the Instagram on at ProtrusiveDental and do leave a feedback review on Apple if you listen to Apple because that really helped me to find more listeners just like you who find this valuable and we appreciate you listening. Thanks so much.