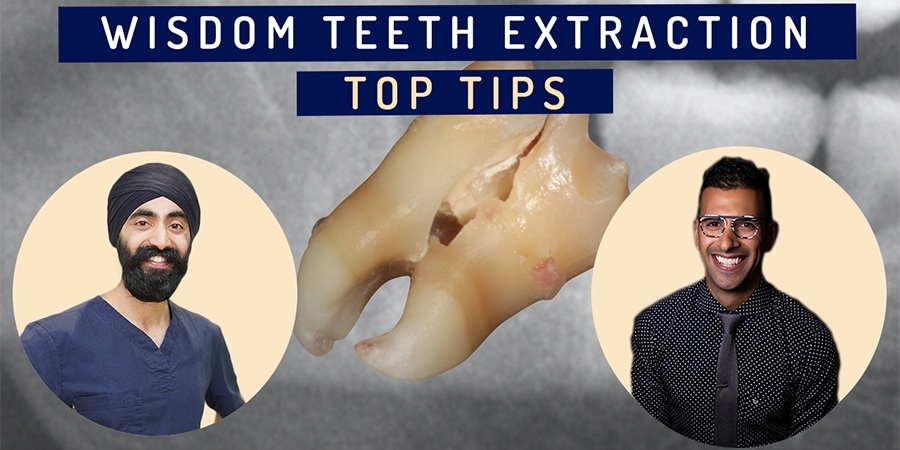 All of the Protruserati clan get 15% OFF the third molar experience with the code ‘protrusive‘!

A tricky Third molar surgery can humble even the most experienced of Oral Surgeons. Surgical removal of Wisdom teeth has become somewhat of a post-graduate discipline, with many Dentists lacking the confidence or even the appetite for their removal. We have today the very enthusiastic Dr Nekky Jamal who is a GDP that lives and breathes third molar surgery. He shares with us his top tips for the planning and execution of M3Ms surgery!

Protrusive Dental Pearl: When you are sectioning a mesio-angular impacted tooth, start your section 1-2 millimeters more mesial to where you think the furcation is – you will have a tendency to drift distally and therefore more likely to HIT that furcation which is when the magic begins.

(Regarding disto-angular third molars) “If you lose your crown, you almost lose your ability and your orientation of where that tooth is.” Dr Nekky Jamal

In this episode, I asked Dr Nekky about:

Join us in our Telegram Community, where we can always help each other out!

If you enjoyed this episode, check out Make Extractions Less Difficult: Regain Confidence by Sectioning and Elevating Teeth with Dr Chris Waith

Opening Snippet: The situations where I failed in, I noticed when the third molar roots are directly touching the second molar roots. Okay? That's what makes it difficult and if you look at at the classification of that, that's a distal angular impaction. But what makes it so difficult is you can't get your instruments between the second and the third molar. And if you break off the crown of that third molar, you can't even see the mesial root because you can't see past that second molar crown.

Jaz’s Introduction: In this episode, Dr. Nekky Jamal will cover all the points you need to know as a GDP if you’re extracting wisdom teeth, and that’s surgically what makes it an easy case, what makes it complex case. What about those cases where you’re worried about nerve damage? When do you need take a CB CT? What about coronectomy? How to get cleaner flaps so you could take out wisdom teeth in a much more cleaner field, what equipment to use, and how to get cleaner flaps as well as Nekky’s main tips to improve your success rates with surgical third molars. Hello, Protruserati. I’m Jaz Gulati, my journey with wisdom teeth began when I was a DCT, a Dental Core Trainee at Guys hospital, I was doing my oral surgery post. And that’s when I started to see my consultants the way they were moving it. But when I got to do some easier cases, it felt good. And then a few times I got stuck and I needed rescuing. Now when I went to Singapore, the fascinating thing about practicing in Singapore and how that’s so different to UK when it comes to wisdom teeth is like in the UK, we have the nice guidelines and we touched on that in this episode. But in Singapore, I felt as though like the only people that wouldn’t have third molars removed is that if you actually had hypodontia, if you didn’t have a wisdom tooth, that’s the only time you weren’t having it removed like it was pretty intense and extreme as about the cases that you’d have wisdom teeth out. So I got a lot more exposure and a lot more experience of taking out wisdom teeth, but I still was staying within my comfort zone or just slightly beyond so that I can improve as a clinician. Now one thing that really helped me was a 45 degree handpiece and again, we cover a little bit about equipment and how to get the right armamentarium to improve your extractions. But when I came back to the UK, I was doing less and less. I’m doing less and less, I’m still happy to take on surgical wisdom teeth, but you see less because of the NICE guidelines, right? So we have to really careful and judgmental about when we take on these third molars. Now, my colleague John, he referred me a case recently, and I shied away from it. I looked at it and I thought, ‘Oh, this is just beyond my comfort zone.’ I’ll share that radiograph if you’re watching this, if you’re listening, it was a mesio-angular and the distal root had a little kink in it and I shied away. So then I was looking at Okay, how can I improve my wisdom teeth because I, it was kind of bugging me that I wasn’t ready to take on a case like this. So I found Nekky Jamal, his course is on course karma. So it was mine splint course and RBB masterclass. So I started to watch the reviews and some clinical videos of his and so I signed on and I’ve been really enjoying it. I mean, can you learn wisdom teeth online? Well, you know, I have to eat my hat because you can. There were so many clinical videos like when I was in Singapore, I was literally relying on YouTube videos, and there was only a handful of good ones. Now to have like a bank of 60 plus surgical extraction videos from flaps to actual elevation to closure was absolutely brilliant. So that’s what really helped me, so I invited Nekky on today to share with you the main ways that we can improve your wisdom teeth extraction, whether you’re starting out and you’re looking at Okay, how can I pick the low hanging fruit versus if you’re already extracting out third molars? I know he shares a few gems in there like the hydraulic flap technique to make your flat bracing easier and your sectioning more successful. The Protrusive Dental Pearl I have for you is very relevant to wisdom teeth and it’s actually when I listen to this episode again, it wasn’t covered in the main interview. So it’s like a another big gem that can reveal to you that I learned from Nekky’s course, which is this when you are sectioning a wisdom tooth. Now obviously we spoke about sectioning and elevating molars with Chris Waith, what a brilliant episode Chris, what great job he did for us. So if you haven’t listened to that already, or if you want us to more extraction based episodes, do check out that episode with Chris Waith. Now when it comes to wisdom teeth, let’s say you are going to be sectioning a mesio-angular tooth, right? When I have section before, sometimes the section goes off plane and you don’t get exactly to the furcation. The big tip here that Nekky taught me is that you want to go one to two millimeters more mesial than you think. So you want to start that sectioning a couple of millimeters more mesial than you think. So by time you actually get to the furcation, you probably going to be a bit more distal. If you start where you think is the middle of the tooth, you end up being a bit more distal and then we start to section the tooth, you get a chunk of the distal part of the crown, you don’t actually get to separate the roots. So that for me was a massive takeaway from the course. So I want to share that with you go one to two millimeters more mesial to where you think the furcation is when you are sectioning these mesio-angular impacted teeth. Now let’s just join Nekky for so many gems. It’s a really nice gem packed concise episode so hope you like it and I’ll catch you in the outro.

Main Interview:
[Jaz] Nekky Jamal, welcome to the Protrusive Dental podcast. How are you my friend?

Jaz’s Outro: My goodness isn’t Nekky such a charismatic man. I mean, I love his style of teaching. I love his deep voice. I love his AV setup. He’s like been one of the best guests I’ve ever had in terms of good audio and video equipment. So kudos to you buddy. Like I said if you want to join the course, if you want to find out more about the course is a thirdmolarsonline.com that’s thirdmolarsonline.com I’ve done it, it was sensational. And with the one to one mentoring that he gave me. I just feel really confident to tackle that case that really sparked my desire to learn more about tackling more complex wisdom teeth. So the code to use is “protrusive” Nekky, thank you so much for giving 15% off to all the Protruserati. I hope you guys make use of it and hopefully Nekky will also join us on our telegram group to be our resident third molar expert. Nekky, you did a fantastic job on this episode. Thanks so much. I’ll catch you same time. Same place. Next week. Guys, thank you so much for listening all the way to the end.