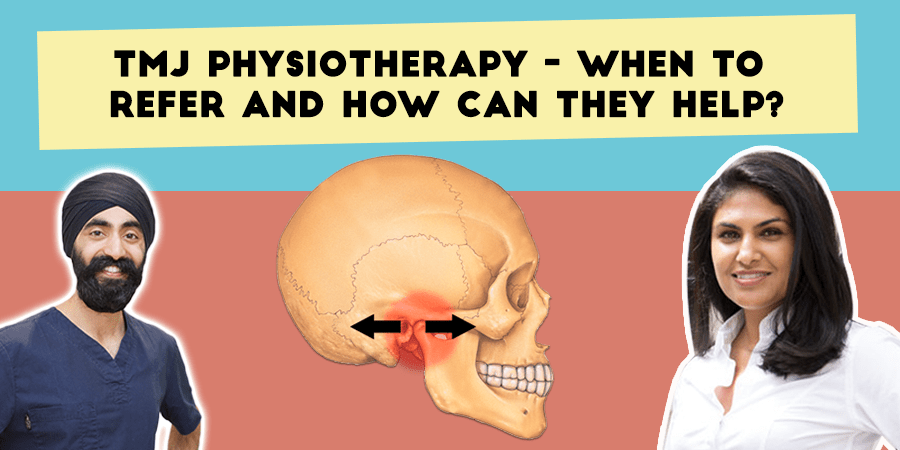 TMJ Physiotherapy – When to Refer and How They can Help – PDP063

When it comes to the management of Temporo-manidbular Joint Disorders, we often NEED to adopt a multidisciplinary approach. I am a strong advocate of Dentists involving TMJ Physiotherapists (yes, they exist!) to help their patients. In this episode I am joined by The TMJ Physio Krina Panchal!

Interestingly enough, Physiotherapists in the UK do not cover the TMJ in their studies – it is a postgraduate niche that Krina has travelled the world to learn – which is why I respect her even more!

Protrusive Dental Pearl – have you checked out the ‘Bruxchecker’ foil as a tool to help diagnosis of Bruxism and much more? I comprehensively reviewed this product and thought it was very clever!

In this episode I ask Krina:

I will add the promised downloads on to the Protrusive Dental Community Facebook Group (are you part of the Protruserati?!)

If you enjoyed this episode, check out Stay Away from TMD – why you should think carefully before niching down to TMD as a Dentist.

If you want to learn about Occlusal appliance as a protective appliance, to help with pain or as part of pre-restorative management, do check out the SplintCourse which launched a few days ago with a big bang!

Enrollment ends 19th March at 10pm UK time so I can focus on Monthly Coaching! Thanks for your support, Protruserati!

Opening Snippet: Because I think my most difficult patients who have found some success with splints i think you raise a great point that they're not wearing the splints during the day and i think that's where really you guys come in to re-strengthen and to stretch and relax everything...

Jaz’s Introduction: Hello, Protruserati. I’m Jaz Gulati and welcome to another episode of The Protrusive podcast. Today, i am recording this introduction on international women’s day. I’m so proud to be sharing this episode with a fantastic woman. Her name is Krina Panchal. Krina Panchal is a tmj physiotherapist and i’m a huge believer in physiotherapy to the management of your tmd patients and i’m going to let her explain why it’s so important and how we can collaborate. So this episode is basically cover when, why and how to involve a physiotherapist in the management of your tmd patients like I often refer my patients especially when they have chronic pain. Chronic pain is a completely different beast to someone’s got acute tmd. So chronic is like when it’s been more than six months and what happens with chronic pain is that they develop something called chronicity meaning that the the nerve signals that fire from the brain to the site of pain they get sensitized over time and even though that initial inflammation or strain it heals, the pain signals are still firing. So chronic pain is a completely different beast. So we can’t just rely on advice and appliances, we need to involve a fantastic speciality of physiotherapy because they are really really useful for helping our patients who suffer from tmd and if you’ve ever wondered how to get in touch with one, what kind of diagnosis they can help with then this episode will clear that out for you. The protrusive dental pearl i want to share with you today is something i actually learned from Krina Panchal’s instagram. She saw a dentist who made her a brux checker at that time i had no idea what a brux checker was but it seemed really interesting like right up my street you know on the theme of bruxism and parafunction so i did some more research and i learned a lot from her video. It’s basically like a thin foil imagine like a really thin essex retainer like a foil and it’s red and what happens that when you grind or clench when your patient with parafunctions on the foil they make a little mark, they make a little pattern. So it’s helpful in diagnosing people who’ve got parafunction but more importantly which teeth touch and when do they touch? It gives you that sort of diagnostic information, i mean in the literature for the brux checker it’s referred to as the ecg of occlusion and bruxism which i found very fascinating. So i made a youtube video about six minutes all about the brux checker giving my honest reviews because what i did is I tried it on myself, i tried it on my nurse, i tried on my patients and i have to tell you to give you a spoiler i’m a big fan right? Like i’ll make it tangible, I had this one patient who came to see me because he wanted some bonding and he came to me as a second opinion because his existing dentist my principal was not quite ready to do some bonding on him because some other bonding kept chipping and so my principal thought you know what i think there’s some bruxism going on. I think you should see, Jaz, because this is the kind of stuff he deals with so he came to see me and i wanted to know the chipping that he was having on his anterior composites was it due to bruxism or not or was it something that was not bruxism related i.e the composite was too thin or something he was doing not at nighttime i.e was he biting on sellotape or biting his nails that kind of stuff. So what i did is i made him a brux checker and i mean i had seen that he had signs of bruxism and parafunction so i knew he would create a mark in it. So he went home he wore it for me and then when he showed it to me it showed that at no point did he touch or go near the composites that we were concerned about and so whether he could he couldn’t have bonding on the premolars i think he could because actually it showed that he had canine initiated dislusion and he didn’t come onto the premolars which he wanted bonding. So as long as the occluding scheme is respected and you conform to it i don’t think there’s any issue here in terms of chipping from bruxism because i think his bruxism is happening in all the right places. It was happening on the canine which didn’t have any bonding on them so this was a cool little thing to do and i’m hoping i’ve shared some of those photos with you for those who are watching on youtube to gain some value from that. So let’s join the episode with Krina Panchal on the importance of tmj physiotherapy.

Jaz’s Outro: Guys thank you so much for listening all the way to the end. I really appreciate it as always. If you’re listening to this and it’s like this is a brand new episode then wow i have just pretty much launched my splint course or it’s about to launch so on friday i’m launching the splintcourse. splintcourse.com I’m so so proud of it. This is my baby it’s taken so many years of video recording, late nights, early mornings to finally bring this 10 or 11 hour course into fruition. I say 10 or 11 because it depends on whether you count the bonus modules or not so i’ve got lots of content on there i won’t bore you because i’ve already told you all about the splint course already and various opportunities so please do check it out if you’re interested in learning more about occlusal appliances check out splintcourse.com Krina was one of my beta testers because i was really keen to hear her opinion of what she thought i was teaching dentists because i wanted to have a whole section on there, on the importance of conservative care and the importance of physiotherapy so check out splint course if you haven’t already and i look forward to seeing you on there. Otherwise i’ll see you in the next episode and hey if you found this useful do follow us on @protrusivedental and also follow Krina Panchal as well her instagram handle is @karinapanchal. Thank you again everyone and i’ll catch you next episode.

Episode 77
TMJ Physiotherapy – When to Refer and How They can Help – PDP063
Loading Comments...