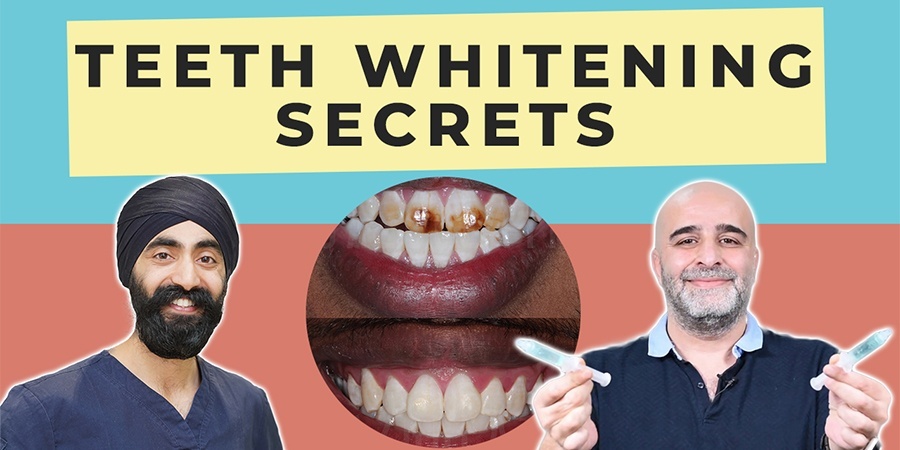 I am joined by a Dentist fellow podcaster himself, Dr Payman Langroudi, to help you improve your teeth whitening results right away!

Protrusive Dental Pearl: Using the patients’ aligners as a whitening tray – and better yet, the use of Vivera retainers and Enlighten whitening to Guarantee B1 shade!

In this energetic and conversational (yet educational!) episode, we discuss:

If you enjoyed this episode and want more free training with Dr Langroudi, check out his free online training for Dentists

Jaz’s Introduction: Hello, Protruserati. This is Jaz Gulati, and welcome to Episode 58 of the Protrusive Dental podcast. I appreciate you for joining us. Today is such an impactful hour that we have on teeth whitening. Now a lot of you thinking teeth whitening, come on, Jaz that’s so basic. Just get a tray, wax, some gel in and that will whiten the teeth, right? Well, no, there’s so much more to it than that. And this is going to be probably the most impactful Real Talk 60 minutes of teeth whitening content you ever heard. I think everyone needs to hear it because today’s guest is Payman Langroudi. He was a dentist. And then he founded Enlightened Whitening, which is the premium brand of teeth whitening in the UK. And what he’s doing is amazing. He’s such a massive supporter of young dentists and dental education. So it was an absolute honor to have him on and he really covers it in a real talk fashion, right? We don’t know it’s not to scientific, it’s not to blah, blah. It’s actually so easy to listen to Payman Langroudi talk about these things. I hope you enjoy and follow along with great ease. We talk about all the important things that you should know as a practitioner for teeth whitening like comparing the different tray designs, what might surprise you is that a gel is not a gel is not a gel so all the gels may not be the same and you know we’ll look into why that might be the case, how to maximize success by reducing sensitivity and how and why you should be doing more teeth whitening right now. The Protrusive Dental Pearl I have for this episode is whitening related. Did you know that you could be whitening your patient’s teeth during tooth alignment. So a lot of my Invisalign patients will be whitening as they go along. But the magic really happens at the end like some of my patients will whiten so well during their aligner phase that there’s hardly anything to do at the end. But that’s rare. That’s when they got all the best enamel and their protocol is really good and everything just aligned. But a lot of patients will need the final teeth whitening at the end in their retainers. But the Vivera retainers by Invisalign and this is not sponsored by Invisalign or anything. They are fantastic, right? We all know how good Vivera retainers are. And because the seal is so good, that enlightened whitening actually guarantees a B1 shade if you use their enlightened whitening system in the Viveras. So the first time I learned that I was like whoa That is crazy because it speaks volumes about Vivera retainers, but also speaks volumes about an enlightened, the fact that they understand that hey, it’s not just their high quality trays they respect that, there’s another system out there in Viveras that will produce a good seal and that’s why with that gel that able to guarantee that B1 shade and sometimes right when I told dentists about this they said you know where the attachments are, don’t need get like a tan line where where the tooth has not whitened it’s just not the case you know, we know that the teeth whitening gel goes under the enamel if you like and it’s not gonna leave any patchy areas that didn’t whiten so that’s not a concern that I have and it hasn’t been for my patients but certainly but especially in the retention phase if using the Viveras they make fantastic whitening trays. This episode is sponsored by Enlightened Whitening and I really appreciate their support for the podcast. Payman is one of the Protruserati and I’m ever so grateful for that. So it was really great for that reason to have him on as well. And I hope you enjoyed this episode but I just want to say what a few more words about my experience with Enlightened. Everything from the branding to even the courses that they put on with the mini smile makeover has that premium feel and patients can really sense it when they go on their website for Enlightened Whitening or when they get the packaging. Even the trays when you get the trays from Enlightened, you can tell there’s something a level above for their trays. So I just want to say thanks so much to Enlightened for sponsoring the show. Really appreciate it. And I hope you all enjoy this episode.

Jaz’s Outro: Thank you so much for listening all the way to the end. I told you it’d be a very impactful episode. I hope you went away with lots of new knowledge and lots of confirmation of ideas that you already probably had. Payman’s a great speaker, so easy to listen to and speak to. So he was a great guest. Payman, thanks so much for listening all the way to the end as well. I really appreciate you as well. So guys, the next episode is also going to blow your mind, it’s Nik Sethi on ceramic onlays like he does not hold anything back. It’s just an absolute jam packed episode. A bit like Paul Tipton when he gave every sentence was a pearl on fixed removable bridges in that episode. Nik Sethi is one not to be missed as well. So Catch you next week. Same time. Same place.