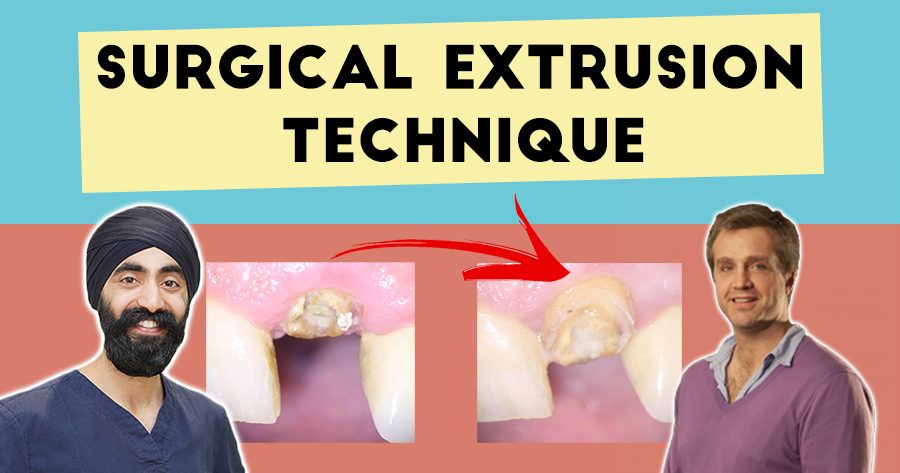 How to Save ‘Hopeless’ Teeth with the Surgical Extrusion Technique – PDP061

No Ferrule? No problem! Dr Peter Raftery, Endodontist, discusses the contemporary use of the ‘Surgical Extrusion Technique’ to make hopeless teeth restorable. Crazy, I know, so take a listen because the science makes sense!

All the way back in Episode 9 with Dr Aws Alani (Restorability with a Restorative Specialist) we briefly mentioned this technique in passing…which led to a cascade in events and Dr Raftery reached out to me with enthusiasm because I called out to the audience if they knew anyone using this technique! I love that!

Essentially you are (gently!) extracting a tooth and then intentionally re-implanting the tooth, except this time you are going to be a little greedy and ‘grab’ some ferrule. Then, a customary Root Canal Treatment 2 weeks afterwards, and you have yourself a restorable tooth. As someone who loves saving teeth, this is just fantastic. We know the science works because we DO re-implant dirty, grotty avulsed incisors of 12 year olds with some decent success rates.

Protrusive Dental Pearl: have you used Viscostat clear? It is my preferred astringent and will not interfere with bonding

I will have to add the resources later – right now I am running late for work!

Opening Snippet: So yeah odds of it still being there 12 years later still 93% and that was with forceps removal so i'd argue that the Benex only stands to last longer...

Jaz’s Introduction: Okay, so you have your patient they’ve come in, they’ve fractured their upper premolar at gingival level. Kaput. There is no ferrule like you can maybe get your perioprobe inside and feel maybe a millimeter subgingival but there’s hardly any tooth structure left. What are you gonna do right? Because most of the times it’s going to be for the bin right? Like it’s hopeless, let’s extract it. Now if you want to get really extravagant you could arrange for orthodontic exclusion which takes time and it’s costly or you can do surgical crown lengthening also incur a fee but also involves surgery obviously and it will also mean that the patient will have potentially black triangles and the gingival zenith of that tooth will now no longer be the same as the adjacent tooth so again that all takes time and money and effort so a lot of times people say let’s just take it out and stick an implant in, a bridge in, whatever. Now what if i told you there was one more way this way i was exposed to it on on social media actually in about 2017 and in 2018. I attended a bard lecture about the surgical extrusion technique and it was interesting It was Italian chap Dr Bachiani talking about this technique and it was the first time i’ve seen it presented in a scientific way and then if you remember in 2019 i did a lecture or a podcast with Dr Aws Alani restorative consultant it was restorability with the restorative consultant and i discussed a technique whereby you can partially extrude, surgically a tooth and then gain ferrule and restore it and i said in the podcast hey i don’t know if anyone’s doing this technique in the UK please get in touch if you are and fast forward a year someone’s doing it in the UK and they’ve done a lot of cases and he got in touch so Dr Peter Raftery is joining us for this episode Protruserati welcome this episode on the surgical extraction technique aka the partial exodontia technique and this is going to blow your mind if you’ve never been exposed to this you’re going to think whoa how is this even possible? It’s basically taking that aforementioned broken down tooth and extruding it surgically so be it with a luxator or with something called a benex device and now you let nature heal it maybe with a splint okay like one of those wire splints not the kind of splints i bang on about all the time and then a few weeks later you go back in to do a root canal and by now the tooth has fully healed which is amazing like biology is amazing right? And now you have a ferrule and you can now restore this tooth which was otherwise unrestorable. So today with Dr Peter Raftery, who’s an endodontist based in Portsmouth we’re going to be talking about this technique. He’ll walk us through the all the stages of this technique, case selection, things that can go wrong, what advice he would give to a person doing it for the first time and we also take a look a little bit at the evidence space as well for this because i think this has a place in general dentistry and now we know that implants are not the panacea we once thought they were therefore i think this technique could be pretty worthwhile even if for the odd case here and there maybe for us upper second premolar as your first case that you want to just surgically extrude it and give this tooth a second breath of life. Sp i’m going to dive into the interview and before i do obviously i owe you a Protrusive Dental pearl. What do you guys dip your retraction cord in or what do you use to get hemostasis? I’ve used a lot of things in the past like ferric sulfate, expasyl that kind of stuff but you know what my favorite still and this isn’t sponsored or anything this is just me sharing for those who don’t know about ViscoStat Clear is 25% aluminium chloride and what i love about it is the hemostasis that it achieves without that horrible brown nasty residue which you can sometimes get with ferric sulfate and also did you know that ferric sulfate can interfere with bonding. So any time i’m doing like anterior crowns and i’m using retraction with cords, i’m always gonna be using ViscoStat Clear in fact anterior posterior i’m just using ViscoStat Clear everywhere i ordered this big tub of it and my nurse knows that it’s the only astringent i guess i will use so a big shout out to ViscoStat Clear which has just been brilliant and i’ve really enjoyed using it no more horrible brown mess. So i hope you enjoyed that material selection pearl of ViscoStat Clear. Let’s dive into the episode so we can learn more about this surgical extrusion technique aka partial exodontia technique.

Jaz’s Outro; So there we have it the surgical extrusion technique or the partial exodontic technique isn’t that fascinating right? I mean something that you would think is innately a bad idea it just seems too good to be true and it’s just fascinating. I think the true secret i guess is case selection like with anything like any technique case selection is always the key so choose your cases wisely and i really do think having something like a benex device if you’ve got access to a benex device wow. I mean you mean that’s half the battle, that’s more than half the battle i think because if you’re relying on luxators then things can chip and break and it may not be possible to this technique. So those are benex wow you’ve definitely got one leg up totally but I really thank doctor Raftery for coming and sharing his passion for saving hopeless teeth. So i hope you enjoy that episode and i’ll catch you in the next installment of the Protrusive Dental podcast. Thank you to all the Protruserati out there.

Episode 74
How to Save ‘Hopeless’ Teeth with the Surgical Extrusion Technique – PDP061
Loading Comments...