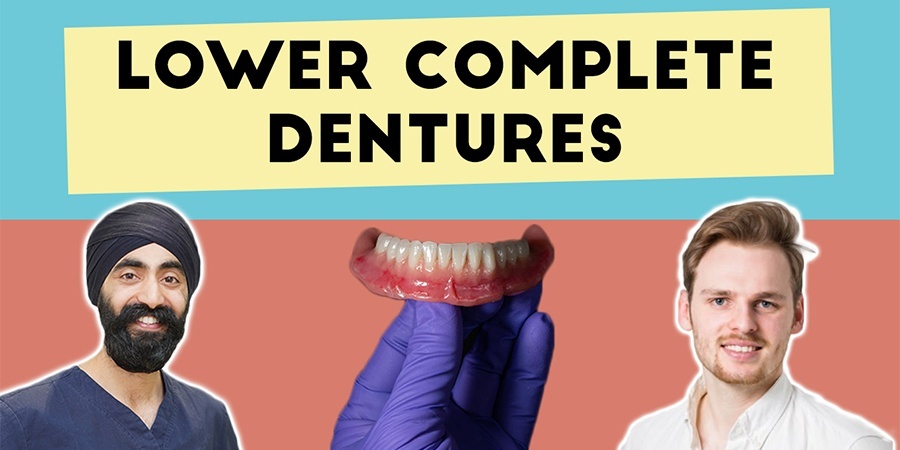 Lower Complete Dentures are the bane of Removable Prosthodontics. I know many Dentists who ‘hate making lower full Dentures’, likely because they are difficult to master. So difficult that I got Dr Rupert Monkhouse to give the Protruserati a podcast masterclass on how to improve in this frustrating area of Dentistry!

Protrusive Dental Pearl: The power of silence! When you present your patients a solution or treatment plan, or tell them the fee, there may be a silence. Embrace it. Expect it. Don’t panic. This is normal! DO NOT but in with a ‘why don’t you just think about it…’

If you enjoyed this topic, why not also check out the Master himself, Dr Finlay Sutton on Troubleshooting Chrome Dentures!

For details on Rupert’s Denture course, DM him on Instagram!

Opening Snippet: I think pros actually is quite not easy but it's it has a few basic concepts if you master those and then sort of extrapolate them you can work out more difficult cases you know.

Jaz’s introduction: Now we all know how annoying lower complete dentures can be. I could probably think about four dentists in the entire world who liked doing complete dentures. And the secret is because they’re good at it, right. And one of those dentists that I can think of is Rupert Monkhouse, who is doing some sensational things with his patients, with his photography. It’s just absolute art. And I’ve got him because he’s so good at removal prostho. So today we’re talking about exclusively the bane of our existence in removal prosth, which is a lower complete dentures. In this episode with Rupert, we’re going to ask about how to get more predictability, if that’s even possible. With the lower complete dentures, what are the signs that actually you may be onto a winner and that you may be able to get a suction lower denture, that elusive suction from a lower denture, which you see flaunting on Instagram, I probably achieve this twice in my career so far. We’re able to get the lower denture suction, and both times you pull the camera out, you record it because it’s such a proud moment, right? To get suction on a lower complete denture. So I’m going to ask Rupert, is there a formula? Or is it all luck? As well as that we talked about all the different stages that Rupert utilizes to help him get a really stable, lower complete denture. The Protrusive Dental Pearl I have for you is a communication one. It’s something that I think as a profession on the whole, we’re not very good at and something that we were never taught. And now when I learned this technique, I guess it’s a technique in communication, it really made a huge difference. And I remember one time in Reading, we were doing an Invisalign open day, and I had two other dentists in the room while I was doing a consultation. So we were taking turns, one person was [right in the nose], the other person was filling like the radiograph requests, that kind of stuff. So we’re working as a team for this Invisalign open day. And I went through my entire spiel, I showed the before and afters I listened to the patient’s wants and needs and how we can help this patient to have a better smile. Now, when it came to the close, ie, it’s going to cost this March and this much time, is this something you want to proceed with? Right, so that’s called a close when you close a treatment plan. When it came to a close, there was a silence, ie I finished speaking. And now there was an awkward silence. Now what happens? Imagine you’re going to a patient, you’re gonna say to a patient, you need an implant and three restorations and the cost will be 6000 pounds. Okay. And then once you said that, what happens next? Well, usually there might be paused for like, a couple of seconds before what happens usually after that pause, usually the dentist might say, okay, you can think about it if you want, or the dentist might say, does that not make sense? Because for some reason that pause is something that we can’t fathom, is something that we can’t tolerate, is something that we kind of panic from that pause. Right? So the lesson here, and what I did that day, was that I just let the pause happen. Okay, I zip my mouth shut. I said, it’s gonna cost this much. It’s gonna take this much time. Is this something you want to do? I just paused. And it was around about a 20-second pause, right? Imagine three dentists in the room and the patient, and there was a 20 seconds pause, that 20-second pause, seemed like probably like five minutes. It was it seemed like an eternity, right? And the patient said, “Okay, fine, I can do it.” And then she’s now having Invisalign with one of the dentist at the practice. So the lesson we can learn here is a respect the pause, he or she who speaks first loses, so don’t speak first, let’s give that patient the time. And the way I learned is that patient needs that time to just figure out “Oh, which day can I come in? How much money do I have? How can I afford this? Is this the right thing for me?” In the patient’s head, they’re probably thinking they’re taking about three or five seconds to respond. But they’re in like a trance. They’re really just thinking about a few things. And once they’ve made up their mind, they will then answer. If you rush the patient, or if you interrupt the patient it’s so easy to say to them. Think about it. And what happens is they go home and they think about it, and the rational brain takes over, because why cosmetic dentistry Invisalign is an emotional purchase. Okay? And when they say, you know what, I rather go on holiday, and that’s it, they won’t be having the treatment anymore, which is a shame because who loses out? I think you lose out but the patient also lose out because how many patients do you know who’ve had cosmetic treatment from you? And regretted it? Very few, probably none, because they all want to have a better smile are so grateful. And quite often you hear this time and time again. They always say I wish I’d done this treatment sooner. So that’s my elaborate communication Protrusive Dental pearl for you. Start respecting the pause. Don’t panic. Give the patient the time to breathe and the time to think. Hope you enjoyed that one and I hope you enjoy the session with Rupert Monkhouse. I’ll catch you in the outro.

Jaz’s Outro:Thank you Protruserati for listening all the way to the end. I hope that helped you to be more confident on lower complete dentures. Do check out Rupert’s work on Instagram it’s absolutely amazing. His Instagram handle his dentist Rupert do also follow at protrusive Dental if you’re not already, and just check out the quality of his photography, the quality of the treatments he does. He takes these fantastic portrait photos of before and after. And these dentures I tell you, they make these patients look about 20 years younger. So Rupert, keep up the amazing work you’re doing and I hope you’ll catch me in the next episode, which is Five things your technician wished you knew.