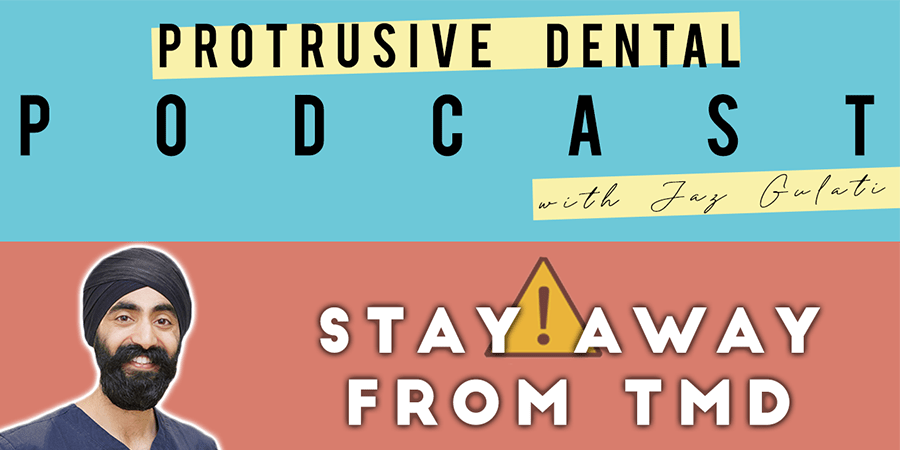 Why do some patients have painful joints, whereas others get headaches?

And why do MOST of our parafunctional patients not get any symptoms at all?

Why do some peoples teeth wear away, whilst others teeth are riddled in cracks?

In this episode, I talk about the pros and cons of devoting your career in Dentistry to treating Temporomandibular disorders.

Treating ‘TMD’ can be a complex field because it deals with all the complexities of chronic pain. However, it can be a very rewarding area. I also discussed why the umbrella term of ‘TMD’ is not really specific enough. We can do better as a profession to understand the diagnoses within ‘TMD’ a little better.

Protrusive Dental Pearl: check out the Otter app for transcribing your voice, lectures or any audio/video! This is great for anyone who wants to convert audio in to notes, for students, and for content creators.

I have uploaded the Diagnostic Criteria for Temporomandibular Disorders (DC/TMD) PDF file on to the Protrusive Dental Community group as promised to the listeners.

If you enjoyed this episode, check out Myth Busting Occlusion and TMD with Dr Barry Glassman.

Opening Snippet: Hey i mean it. Stay away from TMD. Hello everyone and welcome to the second episode of splintember this one's called stay away from TMD. Now it's an interesting title and i appreciate that and i really really gave it a lot of thought before i came to this title because i wanted to take splintember in a certain direction...