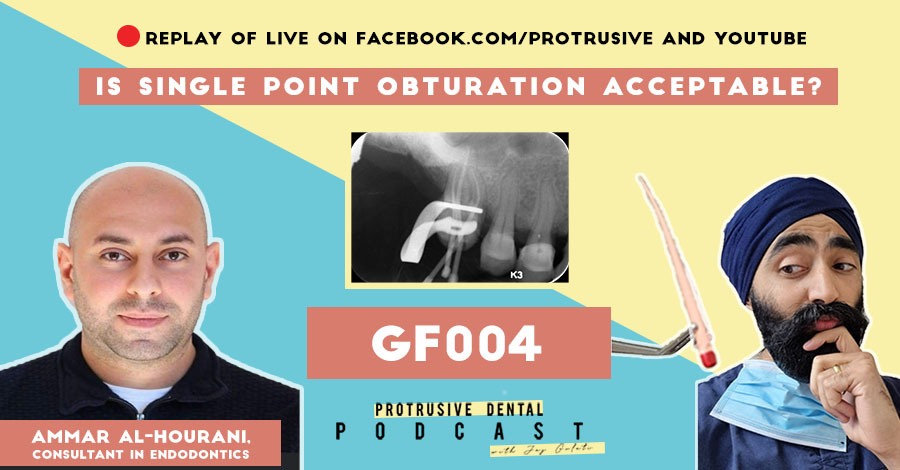 How do you obturate yours? When I have had the equipment (and training) I have used warm vertical compaction – no doubt that IS the gold standard. However, what is the humble GDP using all over the world? I would argue that not only are we using cold lateral compaction with sealer, but in many cases, we are sticking a big, fat, tapered GP cone in the canal with a splodge of sealer around it. Is that legit?

Obviously the landscape is changing with the popularity of bioceramic sealers in Endodontics – I use this time to ask Dr Ammar Al-Hourani about this too.

Does it even matter?

If you enjoyed this, you might also like my episode with another talented Endodontist, Kreena Patel, on why we hate cracked teeth!

Opening Snippet: Hello, Protruserati, I'm Jaz Gulati and welcome to this group function where we answer one burning question. Today's burning question has been sent in by someone it is regarding endodontics, is single point obturation good enough?...

Jaz’s Introduction: What i mean by that is you prepare your chemo mechanically prepare your canal and now when you come to the obturation stage you just stick one of those fat master gp cones in there potentially a matching size to a rotary file you just used and then you just fill up the rest with the sealer is that good enough? See i think this is what GDPs all of the world are doing. We’re not doing warm vertical compaction, we can be doing cold lateral compaction as a whole but a lot of times you stick the fat gp cone in and it fits well enough and there’s not enough space for cold lateral compaction. So is this technique of obturation up to the mark? So that’s what i’m gonna find out today from from Ammar Al-Hourani, who’s a specialist endodontist and we’re gonna jump straight away just one thing to say is the splint course is now just under two weeks away i’m looking to launch it march 12th. It’s the first time i’m revealing this. So march 12th it should be a launching online this splint course is 100% online. it’s packed full of videos like my resin bonded bridge course i thought i’m really proud of it. It’s got loads of rave reviews but it lacked video so i took that several notches further with the splint course and you’re basically like watching me like you’re like over the shoulder kind of training while i’m adjusting splints, while i’m going through diagnostic process. It very much teaches you the very basis basics of an anatomy as a gdp and building up to a diagnosis and how to choose which splint will help your patient the most. Sometimes we’re looking just use a protective splint but also with that protective splint to protect your restorative work or prevent the patient from pathologically destroying their teeth, there’s a bit of a decision-making tree as to which splint why and when and what are the risks of certain splints. So i’m going to go through eight or seven of that including the delivery from a stabilization splint to AMPSAs, the whole lot in between. So i’m so excited to share that if you’re interested why don’t you download one of my flow charts i’ve got a free flow chart for you to download which pretty much even if you don’t do the course you’re going to find it valuable because it’s going to show you when i prescribe certain appliances. Now just a disclaimer i made a flowchart and really it’s a guide but you should be deviating away from guide any sort of guideline you should always be happy to deviate away from a guideline because there’s no such thing as a cookie cutter approach to occlusion. So just read it with caution is there just to help my students of the course get an idea as a generalization and if you don’t understand anything on that it’s because it’s very much there to accompany the course but feel free to that’s www.protrusive.co.uk/flowchart you can download that straight away.