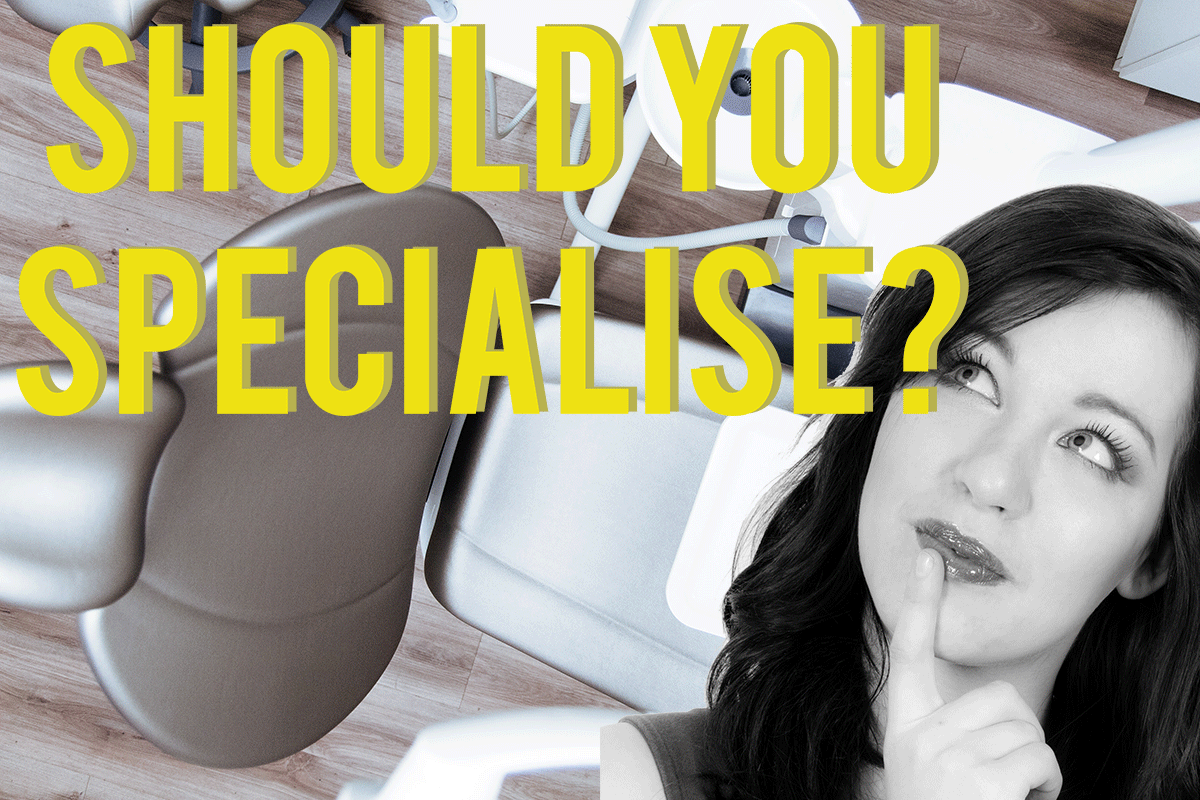 Should you specialise? – PDP006

I am joined in this episode of Protrusive Dental Podcast by the likes of Harjot Bansal, Mahul Patel, Dhru Shah, Catherine Tannahill, Lourens Bester, Kiran Juj and Sunny Luthra.

It HAD to be done to help answer such a monumental question that crosses every Dentists’ mind: Should you specialise?

My main guest, Harjot Bansal, is studying his MClinDent in Prosthodontics at The Eastman (London). He is always happy to help and his instagram is @harjsb

Protrusive Dental Pearl: Show your human side! This will help calm your patients down and create rapport.

Here is the photo, as discussed in the podcast, I have in my surgery which has been eye-opening:

Here is what we discuss in this episode:

A massive thank you to all my guests on the show!

Opening Snippet: Don't think you need to specialize to be good per se...

Jaz’s Introduction: Should you specialize? Do you ever regret that perhaps reach your full potential as a dentist because you didn’t become a specialist. Or maybe you can’t stand being a GDP and you yearn to limit your practice to specialize in something. Or maybe you love the variety and you don’t think you could do the same kind of stuff day in day out. And the thought was puts you off. We interview today with Harjot Bansal, who’s doing his MClinDent in prosthodontics at the Eastman. And it’s great to have a perspective in terms of what it’s like in terms of commitment, time, money, intensity, and all those things that so if you’re thinking of specializing that, and that could be quite a helpful thing to consider. I’ve also got some gdps, and people with special interests, given their two pence about the subject, it is a bit like a debate, you know, I’m a little bit biased towards team GDP if you like, because you know, someone has to represent gdps, I will be sort of having a debate with Harjot and the guests to sort of gather different perspectives. The Protrusive Dental Pearl for this episode is to show your human side to your patients. Okay? So I sort of discovered this by accident where six months ago, I changed my surgeries, computer desktop background to a photo of me on my elective in Vietnam, it’s a lovely photo op, I’ll put it in my blog post. It’s me with these Vietnamese children in a rural village and everyone’s smiling, I think I’m handing out stickers or something, it was just a perfect shot captured. When new patients come in the addition of that photograph really creates a warming environment. If you can find a way to make an icebreaker with your patients, then that’s always a great thing to do. So that has worked really well for me, I think when patients sit down, and directly in front of them, we have this big TV screen, it’s got the photo of me as a desktop background. They really feel at ease, and I can see it in their body language since I put this photo up. So I mean, you could use in lots of ways if you’re a hardcore Westham fan, have somebody in your surgery that shows that. Or maybe if it’s a photo of your children or loved ones, a framed photograph, perhaps, or maybe a photo of your pets. I think all these have a really nice touch, really nice human touch. And if you try this, you’ll see that patients will notice and it really humanizes you and I think as dentists, we really need that. So the pearl for today is to humanize yourself. It’s really, really powerful with nervous patients. Okay, so this episode is a little bit different to my last ones, I’ll be hopping from guest to guest, and I’ll try and mix it up to vary a little bit.

Jaz’s Outro: So hope I managed to get into the nitty gritty of it all in terms of the true cost of specializing taking into account the loss of earnings, but also putting out there that some of the best clinicians I know are not specialists. However, as you heard from Harjot and his passion that you know, sometimes specialists really, really, really can make a massive difference in terms of how rewarding that can be when you limit your practice to something. So you know there’s no right or wrong answer. You got to live the career that you want to do it. You got to make it where you want to be and specializing is just one way of doing. So. catch you in the next one. Thanks for listening.