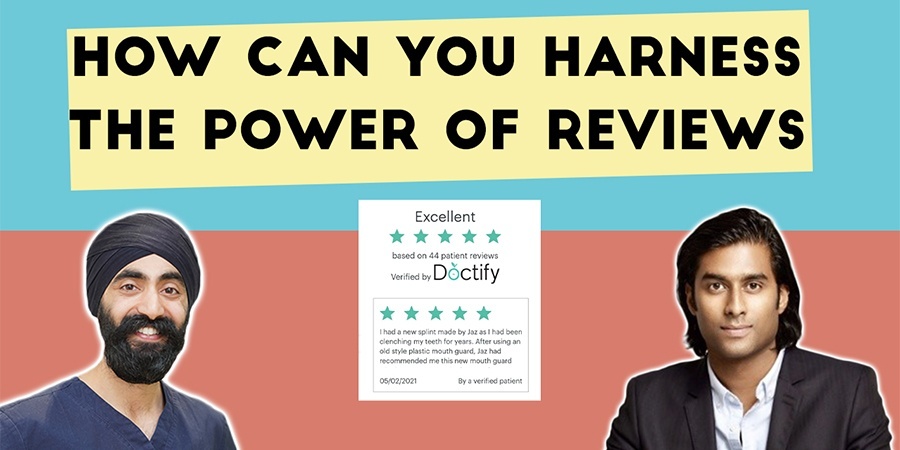 Online reviews for Dentists are a big thing in 2021 and it’s only really just lifting off now. A few years ago I had an appointment with an ENT consultant and the first thing I did was google his name. Most of our patients are googling us and our online reputation is critical. In this episode I am joined by the founder of Doctify, Dr Suman Saha to help you get more high quality reviews for your practice.

Protrusive Dental Pearl: How to increase the success rate of capturing review: Consider text messaging and/or having a tablet in your practice so they can leave it immediately after treatment.

In this Group Function we discussed:

If you enjoyed this episode, you might also like this episode Think Comprehensive – Communication Gems with Zak Kara

Opening Snippet: You know even if you're not paying for it yourself just knowing that actually this person's an expert or can deal with the condition that i know i'm going to see him for or her is like it's so powerful and i think that's what we want to try and solve...

Jaz’s Introduction: Hello, Protruserati. I’m Jaz Gulati and welcome to this group function where we answer a really big and important question i get quite a lot from our colleagues. Now you guys know that i’ve been using something called Doctify to collect reviews but the number one objection or query i get from dentists is that hey Jaz, you use Doctify but my principal is being really funny about me collecting my own reviews. How did you overcome this or something related to the fact that there’s some sort of friction between principals and associates? Like even if you collect google reviews as an associate when you are doing all the hard work to gain the google reviews to uplift the good will and the reputation of the practice but what if you leave that practice those reviews don’t go with you. So we asked Dr Suman, who is actually an orthopedic surgeon, who actually created Doctify to answer this very important question as well as how to harness the power of dental review so even if you don’t use Doctify you will gain something about how to use reviews in a clever way. How to collect more reviews and how to actually improve the social proof of your practice. Hope you enjoy this group function.

Jaz’s Outro: Hope you enjoyed that group function with Dr Suman, everyone and i’ll catch you in the next episode. Let me know what kind of topics you want i’m always happy to answer and make these group functions you know where it says @protrusivedental on the instagram page Thank you so much for watching or listening all the way to the end.

Episode 104
How Can You Harness the Power of Reviews – GF009