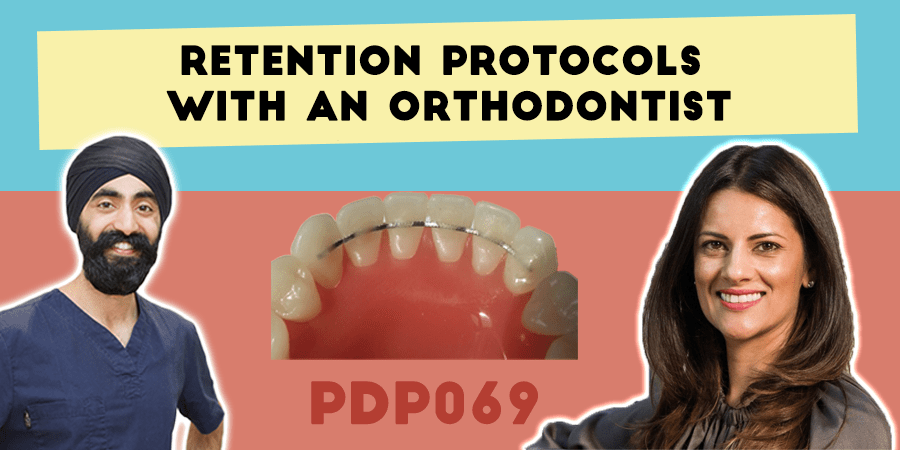 Our views on Retention have changed over the decades – it is now regarded as a lifetime commitment and Dentist are getting good at letting patients know this from the start. In this episode, I ask Dr Angela Auluck questions from the Protrusive Dental Community as well as talking clinical steps of fiddly fixed retainers.

Protrusive Pearl: The Harridine paper helping to explain that wisdom teeth likely do not cause lower incisor crowding.

I hope you are enjoying the Straightpril series of episodes! If you liked this episode, you will also enjoy Dahl Technique Part 2 with Tif Qureshi!

Opening Snippet: Sometimes i send them back so they know that she's fussy, she's you know i'm not actually you know my therapist doesn't put my fixed retainers on for me i do them myself i'm that fussy about it so i think it's just really making sure that your technician knows what you're expecting and you're expecting a well adapted passive fit...

Jaz’s Introduction: Imagine you’ve hired some builders to create a building view maybe let’s say you’re building a new dental practice okay? So these builders come and they start building the foundation and then they build the building upwards for your new dental practice and while they’re doing this maybe they put some scaffolding everywhere to support the structures as they’re sort of building everything up and making everything join up. Now imagine the building is now complete, it’s all done but as the builders are leaving you say to the builders wait what about all the scaffolding you know you need to get rid of the scaffolding right? It looks ugly you know it’s done you know take off the scaffolding and the builders say to “No if we take the scaffolding away the entire building would collapse you.” You’d freak out, you’d be like what the hell is this you know what kind of building is this, that’s not stable. Well someone once explained orthodontics to me in this way we’re using that analogy and they said to me that orthodontics like what is that about like they get everything straight, they get everything aligned but unless you wear your retainers everything will just collapse and go crooked again and that’s when they told me this building analogy. They said orthodontists are like these people who are leaving this scaffolding behind because without the scaffolding, the building will collapse. Well our understanding of retention has changed a lot over the years i know back in the day it’s probably the reason why we see so many relapse cases is that back in the day we thought or rather orthodontists thought that if you put everything in a stable position and everything is class one and you get the correct inter incisal angle et cetera that everything will remain stable and retention is not really needed long term and we all know that this is completely false and that retention now the thinking is, is that retention is for lifetime. Welcome, Protruserati. I’m Jaz Gulati to this episode all about retention with Dr Angela Auluck i mean this is a mammoth, this is a huge topic in orthodontics and in general density because if they’re going to an orthodontist guess who they’re coming back to their general dentist to maintain their fixed retainer or their attention. So i think as general dentists even if you’re not doing like orthodontics we need to be well versed in retention because this is something that affects so many of our patients in this episode we’re going to talk about the very nitty gritty details of placing a fixed retainer about which is the most superior retainer removable versus fixed or do you always have to do both so i know this will be very impactful episode for those who are interested in learning more about retention protocols the Protrusive Dental pearl I have for you is a communication one. Very often our patients will blame their lower incisor crowding on wisdom teeth they will say when my wisdom teeth came through i started to get crowding, so is this true? Well you should tell your patients, NO it’s not true because it was proven in a study by Harridine. Now in the group of Harridine et al what they did is they did a randomized controlled trial they took people with extraction of wisdom teeth and they took people without extraction of wisdom teeth who had orthodontics and they followed them up and they found no statistical difference in terms of the relapse that they had so this is something that we need to explain to our patients. Now if you’re wondering if i also know a study to help disprove the lady that says that the her children sucked all the calcium out of our teeth i don’t have that study at hand but you know what when a lady just says that to me i just ignore it i nod and we move on because what are you gonna gain from arguing right? I mean what can you possibly gain from arguing in that piece of history just suck it up buttercup and move on is my advice anyway. Let’s crack on with this episode with Angela Auluck all about retention protocols.

Jaz’s Outro: I hoped you enjoyed that with Angela thank you so much for listening all the way to the end. If you’re not already part of it, do join the protrusive dental community facebook group where we’ve got such a a thriving community. It hasn’t got like thousands of thousands dentists, it’s got a small group but it’s all the Protruserati who enjoy the podcast and i just feel the love and the connection and the chemistry between everyone i think we’re all so helpful in this group because i think it’s like a safe little place because we’re kind of like-minded like if you listen to this you are similar to someone else who listens to Protrusive Dental podcast so if you want to find that community do join the protrusive general community facebook group i look forward to seeing you there anyway i’ll catch you in the next episode which is all about elastics in invisalign. The do’s and don’ts of elastics and i’ll catch you same time. Same place next week. See ya!