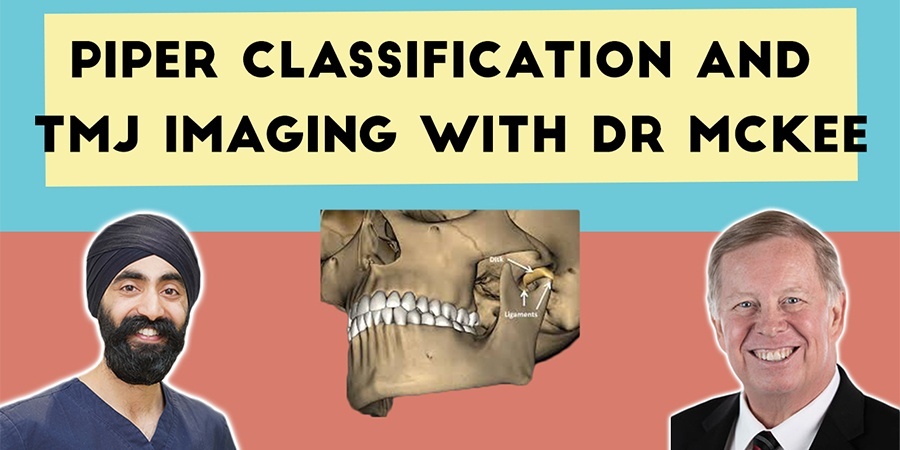 Stop taking OPGs/Panoral radiographs for TMD…they have limited benefit! In this episode I discuss the Piper Classification of TMJ with Dr Jim McKee from the Spear faculty. We also cover exactly when and why imaging of the TMJ may be beneficial (MRIs and CBCTs). I have found the Piper classification easy to implement and I hope this episode helps you understand it.

If you want to Download the PDF version of the Piper Classification of TMJ Infographic we made, click here!

Dr Jim McKee is part of Spear Education – a platform that has taught me so much of my occlusion.

In this episode I asked Dr. Jim McKee:

If you enjoyed this episode, check out TMJ Physiotherapy – When to Refer and How They can Help

Check out SPEAR EDUCATION, a two-day seminar, where Dr. Jim McKee teaches 25% of the course!

Opening Snippet: If I have someone who's a 3A is stable most of the time, if they don't have another joint injury they'll stay that way their whole life usually So I've changed my thinking over the years. I used to think that the bite caused the disc to displace...

Jaz’s Introduction: I used to work in the emergency department of a very large dental hospital. This is like a year and a half out of Dent school and I’ll never forget this one patient I had, right? she came in and it’s an emergency that had never seen before. Like 99% was like acute pulpitis or an abscess. And you know we were doing extra patients and stuff. now, this lady came in and she was literally like her mandible was all to one side. She was literally all deranged, she was in agony, she’s pointing to a jaw joint, I forget which side she was pointing on now but she was in absolute agony and just everything about her bite looked way OFF, right? and I had no idea or the diagnosis was. I didn’t know. I had no idea what to do. So naturally what I did. The first thing I thought was okay. looks like it could be something to do with the TMJ. I’m thinking TMD. therefore, what do we do? why don’t we get a radiograph? Okay? because that’s we do with teeth right? we take a radiograph. So I suggested again O.P.G. okay? so I sent this lady for an opg Okay? Anyway, the OPG/OPT comes back and you can’t really notice anything unusual in IT and i show it to my consultant and my consultant absolutely flips to me. I mean it’s like “Jaz, what the hell you take an oPG for?” Right? Because an OPG is not going to show you much when it comes to TMD. Alright? so that was the lesson number one I had several years ago and I wanna share that with you. And on that topic I’ve had brought on, someone absolutely amazing today is from the spear faculty. I’ve got huge respect for spear education online and what they achieve in there in their training facility, which I’d love to go to one day IN Scottsdale, Arizona. I’ve got Dr Jim McKee who’s real authority when it comes to imaging for TMD and generally about occlusion, you know, and raising the Ovd and treatment planning and all these kind of things. So it’s great to have him on the podcast today on behalf of spear. Hello Protruserati, I’m Jaz Gulati. Welcome to new listeners. Really great to have you on and as usual All my usual listeners, thanks so much for continued to come back for more nuggets and more gems. Today’s gems are all around the piper classification for TMJ. There’s something I teach on my splint course, but I want to hear from Jim who’s been teaching it for way longer and applying it. I want to find out the clinical applications of the piper classification and I’M sure he will do a great job of explaining it way better than I ever could. So I’ve got Jim speaking about that also about the clinical relevance of little things like clicks. Well, what about patients with asymptomatic clicks? What’s the best way to manage those patients? So there’s a lot of real world TMJ and that could be related dilemmas that I’m gonna give you answers for today. The Protrusive Dental Pearl Have you today is regarding TMJ diagnosis and examination whenever you’re examining your patients range of motion. When you get the patient to open up, you will observe that they make a nice straight line path of opening. And what happens if their path of opening isn’t normal and straight, it goes to one side. How do you write that in the notes? Simple thing is you draw it. But now these are all digital. So how can you describe it without having to somehow digitally draw it? Well, if the mandible, okay, does a shimmy. So what I mean is let’s say someone’s opening up, moving their mandible to the right and then back to the left and down to the middle again, Okay, Because the path or the trajectory that if you draw a line from the chin going down as they open their mouth and it makes a little V Shape, think of deviation. So if someone’s jaw shimmies to one side, it comes back, that’s a deviation. Okay, now if someone’s jaw opens and then it goes all the way to one side and it doesn’t go back to the middle. Again, that’s a deflection, so that’s how you differentiate between a deviation. The deviation has a V, and therefore there’s a V shape in its path, and deflection doesn’t have to be in it, it’s a sort of down straight and then off to one side, and it stays there deflects to one side. That’s a cool little tip to remember in terms of deviation, deflection. and that’s something you should write in your notes in terms of management and stuff. I Hope enjoy this one, guys and I’ll see you in the outro.

Jaz’s Outro: Well there we are guys. I told you you’d be able to gain so much from this. So by now you must know the piper classification, you know, a few other classifications out there, you know, now the value of an Mri and a CBct and maybe not so much an opg But now, you know why that’s not going to give you as much information as you need. And hopefully now when you have your patient that has these clicks, you’re able to really close your eyes and think, okay, which piper classification is this? How might this affect what I will say to the patient in terms of their risk going forward. So I hope you enjoy this. I’m definitely bring jim back in the future because I just love talking about topics like these. Thank you so much for for joining all the way to the end. I really appreciate it. Do check out the protrusive dental podcast instagram @protrusivedental if you enjoy this episode, please, would you consider leaving a review on apple? Apple podcasts? We listen on Apple and if you leave a few comments, I love reading them. Thank you so much and I’ll catch you in the next episode. Same time. Same place!