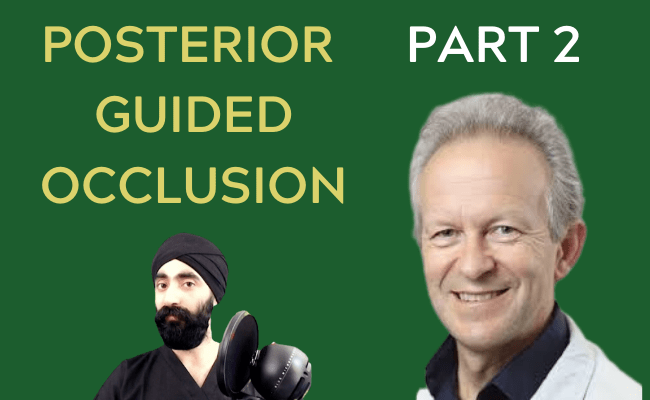 I left you on a bit of a cliffhanger last episode – but now you can finish off Andy’s ‘origin story’ of Posterior Guided Occlusion (PGO) and understand how this is practically implemented on patients.

If you missed Part 1 and the ebook by Dr Andy Toy, check it out.

The Protrusive Dental Pearl for this episode is continuing on the theme of Dental Photography I have been posting about on my Instagram. When taking portrait photos for your patients with a ring flash, point the ring flash at the ceiling, rather than at the patient’s face. This creates a softer, nicer image!

If you missed out on my Butterfly Effect webinar, you can now check it out on www.protrusive.co.uk/butterfly – it’s about how seemingly small events in your career can compound and change the entire trajectory of your dental career.

I added a new book to the book list – the Danish Way of Parenting!

Opening Snippet: The occlusion becomes more simple. You have to work less hard because all you got to do is make sure there's good posterior guides. And all that work you do not the front of the mouth. As long as you don't get too much of a clash there, okay? Then life becomes much, much more simple and you can, canine guidance isn't a bad thing. But it's not essential to a healthy functional bite. Okay?...

Jaz’s Introduction: Hey, guys, and welcome to Episode 32. This is posterior guided occlusion part two, with Dr. Andy Toy. I know I left you on a massive, massive cliffhanger last time. And I hope you can join us again, to get the complete story of how to actually apply the PGO concepts. Now something like I told you guys, it was me learning a bit about this concept for the first time like many of you, so it might take me some time to implement this, if I do end up fully going that way. But it’s just great to hear other points of views and other theories out there. So I’m so glad that Andy, Dr Andy Toy was able to share that all with us. Before we join Dr Andy on the show, again, with part two, I’m gonna give you the Protrusive Dental pearl. And this is a photography one, which has been quite big on my Instagram story recently, I sort of gave a hint that I’ve ever invested in some new sort of photography, flashes and lighting. And I’m gonna go into a lot of detail about that, because loads of people inquired about how to get that nice softer lighting. So I’m going to do a whole segment on that, I think it’d be cool for everyone, and also how I can do it for way cheaper than buying it from some other places. So I’m going to show you the sort of the DIY method of how to make the softer lighting and save you lots of money at the same time. A dental photography tip for the Protrusive Dental pearl for today, which is when you’re taking your portrait photo, which is important to do. And I think with more experience, you realize the importance of it as you go on. And if anyone’s doing orthodontics, you’re probably used to taking portrait photos anyway. So when taking portrait photo, especially with a ring flash, which is the most common flash that people have for dental photography, the lighting can be quite harsh. So if you can just very simply unclip the ring flash from the lens and pointed up towards the ceiling. Now most people have like a white ceiling pointed up to the ceiling. And this will really enhance your portrait photograph, it will make it much more softer lighting enhanced the features. So that will be my Protrusive Dental pearl point the flush to the ceiling, not directly at your patient. The other two things I want to tell you is that I’ve added one more book to my book list, which is protrusive.co.uk/books. And this is the Danish way of parenting. Again, if you already follow me on Instagram, you heard me on my story, talking about the lessons I learned from this book as a father and how Danish people are the happiest in the world. I think it’s because they have a really happy upbringing. So what lessons can we learn so I recommend that as a book on my book list, and the last thing I’m gonna talk about before we jump straight to the podcast is for those of you who missed my butterfly effect webinar that I did for the deanery. That’s now online, and you can catch it on protrusive.co.uk/butterfly. And this is about a little bit of my story about how I always wanted to be a restorative consultant, how that was my real focus. But then, you know, life happens, life comes in the way and how I’ve navigated my career path, and how I do believe that little things small influences, compounded over time can change the trajectory of your career. So it’s all about the butterfly effect that little changes and how they may result in big changes in your future. So check out that free webinar online on protrusive.co.uk/butterfly, and let’s jump straight to Andy Toy’s Part Two with PGO. Hope you enjoy.

Jaz’s Outro: So occlusion geeks, thank you so much for listening all the way to the end. I hope you found it really useful. For those who haven’t downloaded Dr. Andy Toy’s ebook that was available with part one in the show notes on the protrusive.co.uk website. And again, like always a really appreciate you listening all the way to the end. Loads of cool speakers coming up. I’ve got Richard Porter on emotional intelligence. Got Zak Kara back again, as well as Gurs Sehmi talking both about presenting treatment plans and a little bit about you know, the whole case acceptance kind of thing. How can we actually get our patients to understand our treatment plans and go ahead with what we think is the best thing for them. Imminently, we’re coming out what about careers and actually making yourself employable. And also Ama Johal in airway, which is gonna be a massive, massive, very much a topic that is not talked about enough. So really excited to get that content out to you very soon. It does take some hours per episode to actually produce it all and get it all edited. So stick with me and I really look forward sharing that with you. Take care.