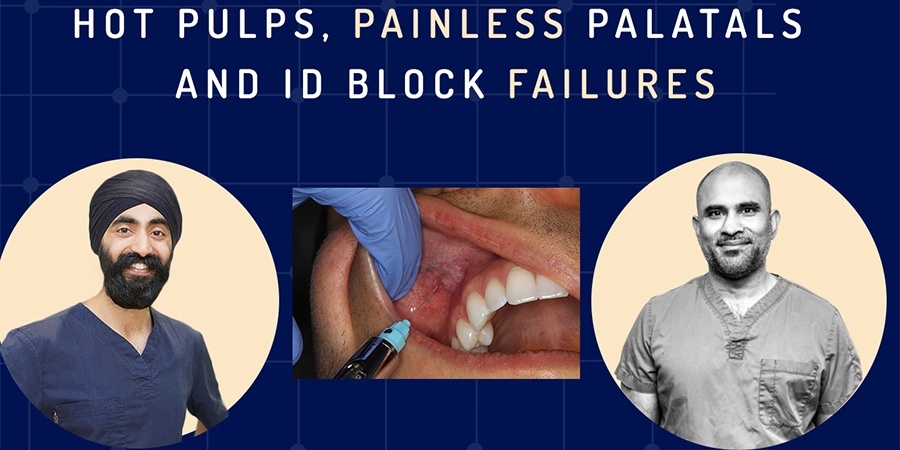 Do your ID blocks work all the time? How about your management of the dreaded ‘hot pulp’? As a part of the Back to Basic series this August, I asked Dr Pynadath George, who practices advanced surgical and implant dentistry, about dental hacks for success with every dimension of local anaesthesia in Dentistry.

Protrusive Dental Pearl: Give painless local anaesthesia (aside from topical anaesthetic, we know that already!) by massaging the mucosa and the lip with your index finger and thumb. Get just a few drops of LA first and give it a minute to work. Then you can go back in and deliver your anaesthetic much faster and the patient will love you for painless anaesthesia!

“If you want good success with the ID blocks, you need to look at and study the anatomy, even if it’s on a skull, and then relate that to your patient..” – Dr George

In this episode we discussed about:

I hope you are enjoying this Back to Basics series of episodes! If you liked this episode, you will also enjoy Basic Implant Occlusion and Work Life Balance – PDP012 with Implant Ninja!

Opening Snippet: As i gave the intra pulpal, I didn't realize the sound was being recorded but as i gave myself an intra pulpal, as i was reviewing back the videos all i could hear was myself grunting going 'ah because it was that painful I had to keep my mouth open while i'm numbing myself up through the pulp but honestly after that was done it was like magic i could you know i found all four canals, extirpate it, done...

Jaz’s Introduction: Hello, Protruserati! I’m Jaz Gulati and welcome back to another episode of the Protrusive Dental podcast. This month is back to basics. So it’s episode number two of back to basics on a huge daily conundrum which is getting success in local anesthesia like how many times in your career so far maybe you have, maybe you haven’t but i’m pretty sure you might have had this where you’ve gone through a bad phase or a bad patch of your ID blocks just not working or how to manage that patient with a hot pulp? That lower molar with throbbing pain and no matter how many infiltrations you give, you can’t get the patient numb or how about the fact that most of the anesthesia we use is just usually lidocaine or Articaine and that’s generally my experience, is there anything more to it? Now to answer these questions i’ve got George. His first name is far too complex from around so we shall call him Dr George, who is a very well known name in the UK. He actually does lots of advanced surgical dentistry, pterygoid implants, zygomatic implants, full arches that kind of stuff. He also does some general dentistry as well but that’s his real niche that he’s known for and along with that he does teach on very advanced local anesthesia techniques like how to give extra oral blocks for example or how to give anesthesia in areas where you’re not really taught at dental school but we’re gonna really bring it back to basics in this episode to go through how to get success from the more basic techniques like what are the the factors involved in getting success in anesthesia and right at the end we even cover the top tips in getting painless anesthesia for palatal, those dreaded palatal injections. Now it’s interesting when i was in Vietnam on my elective, I was with these dentists who are 25 years qualified and they were celebrating like having a reunion and we’re on this charity project in a village near Da Nang and it was a school. So were at the school. We were about to do restorations extractions and basically any sort of dentistry these children needed and there was a queue of children and before they’d have their treatment like for example a restoration or a tooth out, we would numb them up. I’ll never forget how these children were given id blocks so inferior alveolar nerve blocks before they had their restorations on their lower teeth for example right? But the interesting thing that the leader of the group he said that 50% of id blocks failed. That’s what he said “50% of ID blocks fail so let’s give these kids two id blocks each before they have dental treatment just in case they had this language barrier and they were actually having pain and they weren’t just expressing themselves so just to avoid that possibility of a child feeling pain” They gave two id blocks that always stuck with me i know 50% is quite a strong number and maybe it’s hopefully it’s not very true. I’m hoping that our ID blocks are more successful than 50% time but it’s an international issue that we all face on a daily basis. So the Protrusive dental pearl i have for this episode is a local anesthesia one and it’s very simple. If you want to give painless anesthesia, give the topical anesthetic enough time we know that already but the other thing is that when you start giving your infiltration for example you want to first very slowly just give a few drops, just a few drops and you will get these drops ever so slowly and you want to distract the patient the way i do this is by massaging the mucosa massaging the lip with my between my finger and my thumb as i’m doing it. So they’re really feeling this massaging rather than concentrating on the anaesthetic. So give very very slowly just a few drops and you come out give those few drops a minute to work and then you can go back in and deliver your anesthetic much faster and you can actually see the ballooning or swelling of the mucosa which you usually do that’s fine but it the whole point is that if you give the first few drops pain-free very slowly after topical anesthetic the patient i trust you has already had a painless experience and then the second or the main dose of anesthetic you can give much faster without hurting the patient. So hope you enjoy this episode back to basics with George on local anesthesia techniques I’ll catch you in the outro.

Jaz’s Outro: There we have it guys i hope you enjoyed that episode with George lots of stories exchanged there, lots of bigger themes you always like to focus on the bigger picture on these episodes. I hope you found value from that hope you’ll find that the next time you’re going through a bad patch of giving id blocks or the next time you’re struggling to anesthetize someone’s molar which is a hot pulp you’ll just relax and just explain to the patient what the scenario is what’s going on and you won’t always be successful. Hot pulps are one of those things you will not always be successful so don’t beat yourself up over it if you can subscribe on the youtube i really appreciate that and i’ll catch you in the next episode back to basics. It’s gonna be a huge one, it’s all about extractions you absolutely cannot miss the next episode it is gonna be probably the most profound episode i’ve ever done. So i’ll catch you in the next one with Chris Waith. 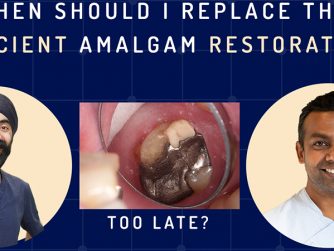 When Should I Replace This Ancient Amalgam Restoration? – [B2B] PDP083