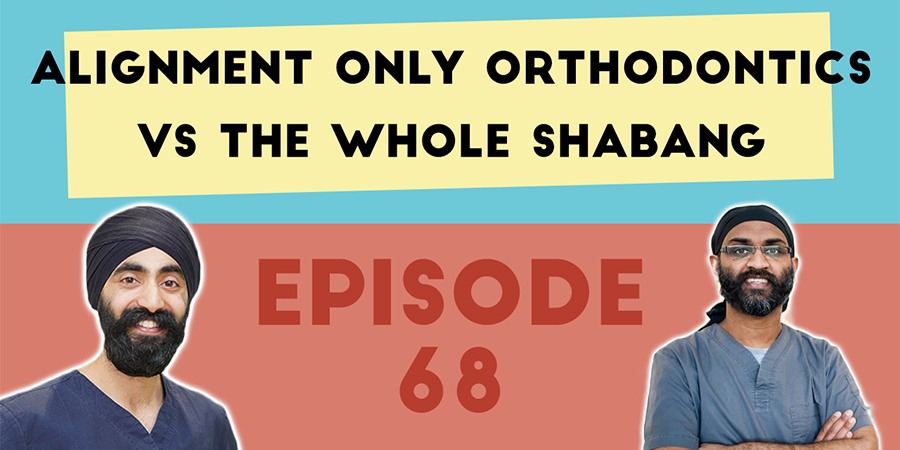 How does Orthodontist Mandeep Gosal feel about GDP ‘Alignment Only Orthodontics’ – in this hilarious episode (where I compared Orthodontists to builders) Mandeep ‘Gos’ shares his thought provoking views on how Orthodontics should be carried out (and how it shouldn’t!)

This episode will be ‘unlisted’ on YouTube so it cannot be searched. For lots of reasons.

One of the best bits from this episode I thought was Gos’ description of the 3 types of consent being carried out for Orthodontics. Which one did you identify with?

If you enjoyed Mandeep Gosal’s style of teaching, do check out his Orthodontic course for GDPs.

If you enjoyed this episode, you will also like 5 Lessons from Lincoln Harris where we also discuss consent in Dentistry.

Opening Snippet: The first statement I'm going to make is you cannot do any kind of compromise treatment if you don't know what the comprehensive treatment entails..

Jaz’s Introduction: Hello, Protruserati. I’m Jaz Gulati and welcome to the second episode of straightpril today we have a specialist orthodontist Dr. Mandeep Gosal following on from that last episode with the general dentist, Dr. Nick Simon, who does a lot of ortho. Let’s get the specialist perspective in because what we’re talking about is alignment only orthodontics, right? How does that sit with a specialist? What do they think? And more importantly, how can we serve you the dentist listening to this who wants to do more orthodontic cases, but you’re having to accept “compromises” right? Compromises in orthodontics, I explained it a little bit in the last episode. It’s like imagine someone’s got a large overjet and they got crowding but you only treat the crowding but you leave them with a large overjet, that is a compromised, that is potentially alignment only orthodontics, but is that the right thing to do? That’s exactly why I had Mandeep on today to speak about really saucy, really controversial, really cool topic and I think ‘gos’ as we call him did a fantastic job today I think you’re in for an absolute treat. He’s no stranger or he’s not fearful of the the beautiful controversy this poses and I’m know you’re gonna find this episode really entertaining. The Protrusive Dental pearl I want to share with you is to help improve your portrait photography, right. So if you’re doing orthodontics, you’re probably already taking portrait photos, I use my normal setup my Canon body, my ring flash, my lens, my macro lens, so I’m just using it for also my portrait photography. Now, a tip that I learned from Dr. Alina Ruzanova who’s an Estonian dentist, and she creates content for ripe global, and she has this fantastic several hour anterior dentistry series on ripe global, which I highly recommend you watch and I’ll put it in the show notes. So you can click on it and find it when you go to a protrusive.co.uk website. The tip that she gave me which really improved my portrait photography with a ring flash is the following. So without having to change my flash system is instead of pointing the ring flash at the patient, when you’re taking the photo, you actually detach the ring flash and you point it to the ceiling. And that gives you a much softer lighting like just look at the photograph I’m showing you now on the screen. This is before I started using this trick. And now this is after I started doing this trick now the annoying thing now is the poor before and afters I’m getting of those patients who I saw before I change the technique. It’s annoying because the lighting is not consistent. But I think for me, this is the best way forward because now generally, the portrait photos are getting are coming out much better, much nicer to see. So the trick is to detach your ring flash pointed up at the ceiling instead of pointing straight at the patient. Now if you’re wondering what settings I’m using? I’m using f 8.0 at ISO 800 and that’s what I’m using to create my portrait photographs like the one you saw. So let’s dive in. I don’t know waste your time because this is such a brilliant episode. Hope you enjoy on catching the outro

Jaz’s Outro: There we have it guys. I hope you enjoy that really entertaining content with Mandeep Gosal. Gos, thanks so much for coming on to make such a fun episode. I think I really appreciate exactly where you’re coming from and I really respect you as a specialist in terms of how you work alongside and how you educate general dentists, is really awesome. So, more power to you my friend, guys, thanks so much and next episode will be about retention, all about your your niggling queries in retention. In fact, on the Protrusive Dental community Facebook group. Some months ago when I was recording this episode, I asked you what you wanted to ask Dr. Angela Auluck, and you guys had sent me some questions through. So your questions will be answered and the most important things about making sure that retention is on point. So I’ll see you. Same time. Same place. Next week.