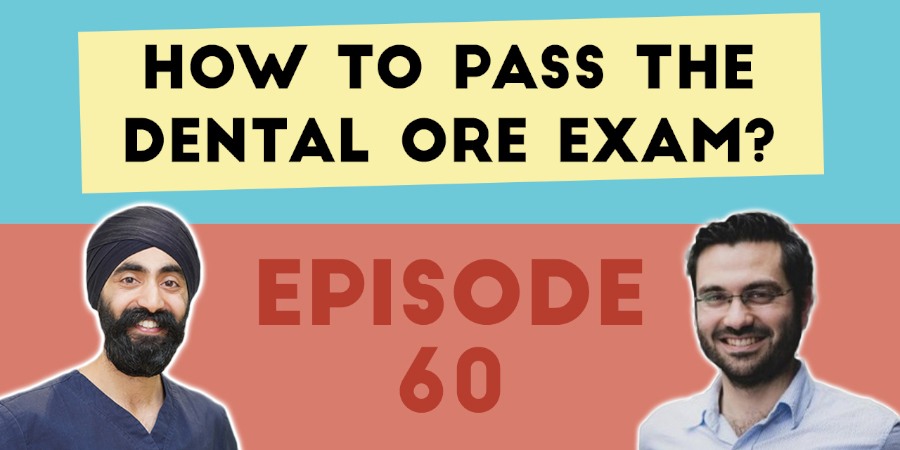 The ORE exam to practice Dentistry in the UK is not easy – listen to Yazan Duedari’s top tips to pass this gruelling 2-part exam and find out what the ORE Exam has in common with a Beyoncé concert!

Dr Yazan Douedari reached out to me as he was a student of the Resin Bonded Bridges Masterclass. I loved connecting with Yazan. He had so much in common (we are both Refugee’s who came to the UK and are grateful for the opportunities) and listening to his hardships and struggles with the ORE process and how he triumphantly overcame it was very inspirational.

There is so much hardship and sacrifice associated with the ORE Parts 1 and 2 – imagine having no income, studying several hours per day and supporting a family at the same time. To top it all off, even once you PASS the ORE Part 2 – how will you find a job?

I am so grateful to Yazan who shared his successes and failures in such a humble fashion.

Companies to buy materials and equipment from:

Some thoughts from Yazan on MFDS Exam – is it worth it?:

Actually, I wanted to mention MFDS & MJDF during the episode saying it would be good for those doing ORE to do one of these exams DURING their ORE journey (not after) as there are a lot of similarities and require minimum extra preparation. I have done MJDF while I was doing my ORE, I prepared for 1 week for part 1 and 5 days for part 2 and was able to pass from the first time. The drawback is that you need to spend extra money on exam costs (around £1000), but the benefit that you get a diploma degree with a few extra days of preparation.

Now to answer your question, MFDS/MJDF do not add much (or anything!) to your information or skills if you’re doing ORE. The only benefit is to improve your CV generally and esp if you are considering applying for further education degrees in the future, it ould be an asset. Additionally, in my case, my dentistry CV was very weak, so I felt having this extra degree in my CV would help me get a job and would give me some advantage over others.

Some thoughts from Yazan on the LDS Exam vs ORE Exam:

One last thing I just remembered and I think it would be useful to mention in the episode is LDS, which is another exam one can take to be able to work in the UK. It is almost identical to ORE, however, it is less frequent (part 1 once a year, part 2 twice a year) and considered slightly easier than ORE, esp part 2.

If you enjoyed this episode, why not check out the advice on Finding an Associate Dentist position!

Opening Snippet: I've never fainted or almost fainted in my life although like i've I was near death several times in my life because of the war i was close to getting kidnapped maybe two or three times, isis you know like i've been through many things but they didn't scare me as much as this Exam...

Jaz’s Introduction: imagine coming to a new country and you’re learning a new language, a new way of life maybe you have your family with you, maybe you’ve got a spouse, a child to support but you can’t work you can’t work until you sit possibly the most difficult professional exam of your lifetime and your entire family depends and relies on you passing this exam. Protruserati, this is a reality that a lot of people face is that people who come from other countries to practice density in the UK for example. Now this could apply to any country whereby they have entrance exams right? So what i’m referring to is the overseas registration exams which in the UK are required for people of certain countries because their dental degrees are not valid right? It’s same where for example if i was to go to the USA, i’d have to sit their exams right? And essentially in the USA i’d have to go to dental school again or the equivalent. You can listen to episode 2 with Kristina Gauchan, if you’re interested in the USA but essentially these exams can be very very tough even the ones in usa and we talked about that. Now the purpose of this episode and joining me today is Dr Yazan Duedari, who is from Syria and he completed his ORE but he’s got a very unique story as though he actually came as a refugee and that really resonated with me for many reasons and will explain the podcast but wow to learn about the hardships and the challenges you have to go through to be able to practice dentistry in another country especially like in the UK it’s just crazy. Like did you know that when they open the examination process like the online booking process for the exam like it goes so fast as though it’s like a massive celebrity concert like a beyonce concert right you know you you log in and you’re there ready to buy your beyonce tickets and like within five seconds they’re gone. Well ORE exams just sit the damn exam that’s the situation they face. So there’s i mean there were so many different layers of complexity that i learned about from speaking to Yazan today so i’m so honored that he gave his time and his energy and his mistakes and his advice. It’s full of absolute gold so this episode really is for those people who are looking to come to the UK or move to any country where they have an entrance exam. You will definitely learn something from this episode. If you’re from the UK and you want to understand the challenges or from the USA, you understand the challenges of a foreign dentist then fine listen to it but this is more for those people who are about to sit the ORE exam we do, we do go into the very nitty gritty of the ORE exam, the different stages, how much it costs, what’s the pass rate, what are the different challenges people face i mean it’s just amazing to think that the process can be incredibly slow and incredibly difficult for no reason at all so wow i mean even when you finish the ORE to actually find a job is just a whole challenge in itself. So i hope this episode will inspire and help many of you out there. So the Protrusive Dental pearl i have for anyone who’s looking to sit an exam in a different country to register as a dentist there is this, it’s a quote you may know who it’s by and the quote is “It always seems impossible until it’s done.” It always seems impossible until it’s done the quote of course is by Nelson Mandela and i kid you not when you listen to this episode and you listen to Yazan’s story and some of the stories that i know about like i know i’ve got some close friends who have done the ORE exam and i know what a grueling process it is. I’ve got a friend in korea right now who’s looking to sit the korean exams and that’s a massive challenge. I have so much respect for the people who go to USA and this and they pretty much go through dental school again like wow i have crazy amounts of respect for these people but it always always just like when you were like sitting your finals exam to become a dentist like how impossible did it seem? Can you like tap into that moment where you’re about to sit your finals exam like it seems impossible until it’s done. So keep going, keep that faith and i really hope you gain a lot from this episode so we’re going to dive right in with the chat with Dr Yazan Duedari for anyone who is interested in the ORE exam or any exam for that matter.

Jaz’s Outro: Well there we have it such a fantastic guy Yazan is such a sweet guy i mean he was a joy to interview and joy to speak to i really loved his story and his drive and i’m so happy he was able to find a private job like wow i mean i’m so so pleased for him so well done Yazan. You really gave so much knowledge away i’m sure you’re gonna help hundreds if not thousands of dentists who may be sitting registration exams for other registration bodies around the world. If you want to download any of the resources or find out the different facebook groups or different courses there are supporting people who want to see the ore exam then just go to the show notes on protrusive.co.uk/ore and you would find everything there and again subscribe to the newsletter if you found value from this share it to someone who may be sitting the ore or is even thinking about it let them learn the journey the best thing to do is share this episode with them so i really appreciate all your support guys thank you for listening again all the way to the end i’ll catch you in the next one.