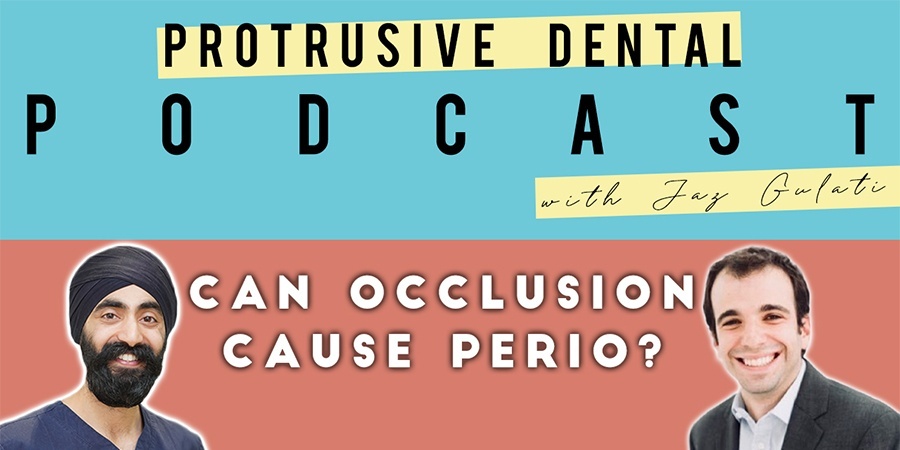 Periodontology has some good studies and evidence base – but what is the current thinking in the role of occlusion/parafunction in the aetiology and progress of periodontal diseases?

I am joined by Specialist Periodontist, London-based Dr Richard Horwitz to discuss exactly the correlation and link between occlusion and periodontitis.

This episode’s Protrusive Dental Pearl I picked up from Dr Dipesh Parmar on his fantastic Composite course Mini Smile Makeover – it is to use a sectional posterior matrix band (like the B100 from Garrison or Tor VM) in a vertical fashion to create perfect mesial and distal contours for your anterior composite restorations such as Class IVs.

I also revealed that the team at Doctify are offering all listeners to this podcast 50% off for the first 4 months – you just need to tell them you listen to Protrusive Dental Podcast.

I had a really fun chat with Richard which included so much:

If you enjoyed this episode, you will like my episode with Endodontist Kreena Patel on Cracked Teeth!

Opening Snippet: I'm checking the occlusion as part of your periodontal examination is a must, is something which is often left. And it is really important and valid. Just because I don't feel it's the primary cause of periodontitis doesn't mean to say I find it any less important in the progression of periodontitis and it has to be addressed, especially when I show you those cases where they were in part exacerbated by a trauma from occlusion. If you don't treat the trauma from occlusion, when it's exacerbated a periodontal problem, it's never going to be treated. So it's really important...

Jaz’s Outro: So there we are, we covered lots of different points. And essentially, it is something that I hope most of us knew already that as far as we know, a bad bite or occlusion or even parafunction just by itself won’t cause Perio, but for that susceptible patient, it’s one more aggravating factor that can lead to trauma, that can exacerbate existing plop in periodontal disease. So hope you found that interesting. Thanks so much, Richard, for coming and sharing all that specialist information with us. I’m so sorry, Richard, for ruining your canine guidance. Okay? That one’s on me. I apologize. Okay? So, thank you so much for listening all the way to the end, guys, and I’ll catch you in the next episode.