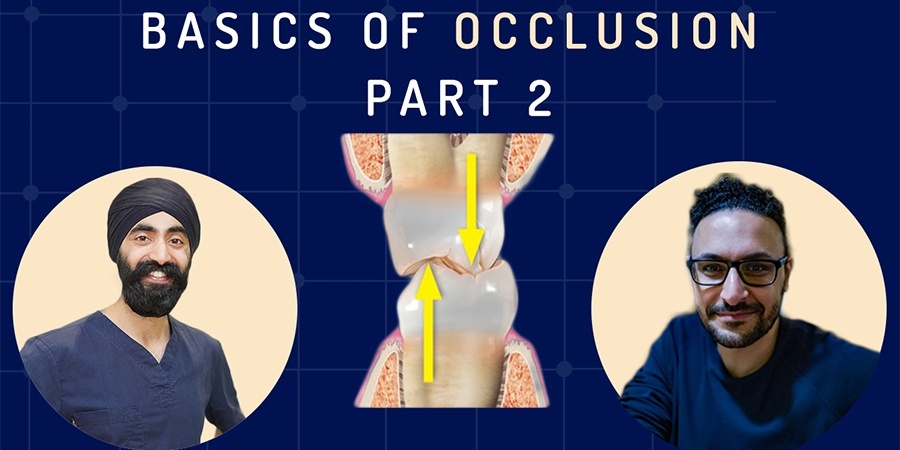 Building on from Basics of Occlusion Part 1, I am joined Dr Mahmoud Ibrahim who takes us on his journey from hating Dentistry to eventually loving occlusion and aesthetic Dentistry. We geek out over occlusal contacts, the occlusal examination and freedom in centric!

Protrusive Dental Pearl: When you’re checking occlusion after placing your restoration, check on the contralateral side with the articulating paper (19 microns, for example) to see if it is ‘passing through’. If it does pass through, double up the articulating paper (now 38 microns). You can keep doubling-up if you need to, until the paper holds. How does this help? You’ll know right away if you need to adjust anything, and if so, you’ll get a better idea of how much adjustment is likely.

“Keep everything nice and smooth, the patient has nothing to grab hold of and push against. That’s probably going to make sure your restorations last a lot longer.” – Dr. Mahmoud Ibrahim

Jaz Edit to the above quote: By ‘Smooth’ we don’t mean highly polished or glazed. We refer to the movements of the mandible being smooth, rather than jerky or abrupt.

In this episode, we talked about:

Join us in our Telegram Community, where we can always help each other out!

If you loved this, be sure to watch the Part One of the Basics of Occlusion!

Opening Snippet: As the mandible is moving, everything should be smooth, and then also everything to be shallow. If you can do that, like you will dramatically reduce your rate of failures with the anterior restoration, just those two gems that you gave there...

Jaz’s Introduction: Hello, I’m Jaz Gulati. And in this episode, we go one step further carrying on from basics of occlusion part one, right,? Thank you so much for the awesome feedback you guys gave for part one, and I’m so happy to have my brother from another mother cut from the same occlusal cloth, Mahmoud Ibrahim, who is a fantastic dentist, you see his work on Instagram. He is amazing. But just learning about a story from this episode is so, so great, because it’s the first time we had a proper chat. I’ve been following him for a few years now. And I didn’t realize that he hated dentistry when he qualified right? And I look at his work now. And I think whoa what happened so as well as so many clues or gems. So I’m going to give you a little preview of in a moment that we share with you. I love just him sharing his story with you of what happened, what was the spark that changed him from hating dentistry and actually trying to follow a career of making websites to then falling in love with Dentistry again in a big way. And they’re really killing it at the whim as he is. Now, I hope you got your coffee ready because there’s a lot of stuff that we’re gonna cover in this very intense but very jam packed episode. Hope you like the analogies and stories and in cases that we discuss, we’re trying to make it as friendly as possible for all my beloved listeners. The watchers is great to have you if you’re on YouTube, hit subscribe. But for those who listen, you are the originals, I will always make sure that the content is easy for you to consume on your commutes. Right? So the kind of things that we cover is what is the difference between the so called tripodized contacts, and is it really better than cusp to fossa and how can we maximize stability with a cusp to fossa occlusion? Okay, we go very much back to basics there. We also talk about what happens when you store someone not in centric relation? Like we talked about a couple of scenarios where you might do that in the previous episode, but what actually happens, what are the risks that you accept, okay? and we also cover what is this concept of freedom in centric or freedom from centric and where do we apply it? where do we believe in it and if so, how do we apply it, right? So if you’re still hungry from that part one occlusion, just listen all the way to the end. This is absolutely jam packed Mahmoud you were absolutely awesome. The Protrusive Dental pearl from this episode is something that we actually discuss in the episode and I’m not sure you just highlight it here I think it’s so good that it deserves its own place which is basically when you’re checking the occlusion, okay? On that topic again when you’re checking the bite, imagine you’ve done a restoration at the common thing to do is to stick your articulating paper on the side where you’ve done the restoration and just look at the marks, right? But what I like to do is after I’ve finished restoration, take my rubber dam off, let the patient have a bit of a rinse or swallow whatever I just put them back instead of checking the same side where I’ve done the restorations I actually checked the other side. Now I know my articulating paper is 19 microns, okay? So I check on the other side. Now, if the patient is holding on that side, I either the articulating paper is not passing through. I know that my occlusion on the right side where I was working is accurate to within 19 microns, okay? Now if that articulating paper passes through, okay? Then I know that I’m out by at least 19 microns so then what you do as Mahmoud says in the episode as well is you double up the articulating paper now we’re on 38 microns, right? So you, patient bites together, you’re checking the other side okay? And now the patient is biting, okay? They weren’t at 19 now they are at 38 microns ie thicker paper. So now you know that you need to do between 19 and 38 microns of adjustment. Okay, now you’re saying ‘Jaz, I don’t know how to do exactly between 19 and 38 microns of occlusal adjustment.’ It’s more just give you an idea, right? Ideally, you want to be checking the occlusion like with an indirect restoration before you cement, right? So if you can do this, before you cement you know exactly how much you need to adjust. Like I’ve been there before, adjusting crowns in the past, where I’m just doing tiny little adjustments and checking it, tiny adjustments and checking it, okay? Had I checked this and I know that way, I’m way out on the other side, I would be more efficient in my adjustments. So hopefully that makes sense to you. Join the main episode with Mahmoud and at the end, I’ll reveal one of the future episodes that are planned regarding helping you with your occlusal goals.

Main Interview: Welcome, Mahmoud to the Protrusive Dental podcast. And I just wanna say like it’s been great to know you last couple of years, mostly on like, you know, WhatsApp, Telegram, social media. I love seeing your adhesive cases that you do and I love how much you love occlusion like me. We’re all geeks and your contribution to our telegram group you know, with over 300 something dentist now, your contributions, always really welcome. You know so much wisdom that you share. So thank you for coming on my friend.

Jaz’s Outro: Well, there we have it guys. Mahmoud Ibrahim. How awesome was he. You need to follow him on Instagram, it’s drmoidental, moi as in Francais, right? moidental. So dr-m-o-i-dental, his work is amazing, message him. He’s such a great guy. And if you’re enjoying our telegram app, where me, Mahmoud, lots of others are on, they’re always helping out, Pav’s on there. It’s protrusive.co.uk/telegram and that’ll take you to the telegram group. Join us. We’re always a helpful community there. And I just want to say a shout out to Dr. Chiggz, Gohil Chiggz. Thank you. It was you who recommended that we cover the last tooth in the arch syndrome ie you place a crown or you do a crown prep on the last molar and you get the patient to bite it together and you’ve lost all the space. How can we manage that scenario? So we’ll cover that at some point soon as well. And also before I forget on the website, protrisive.co.uk under this episode, I will put the three minute occlusal examination initially by Stephen Davies and contribute to or modified by Mahmoud. So I’ll stick that on again, as a handout, I’ll even email it to you if you’re on the newsletter group. Okay? Thanks so much for listening all the way to the end and I’ll catch you on the next episode.