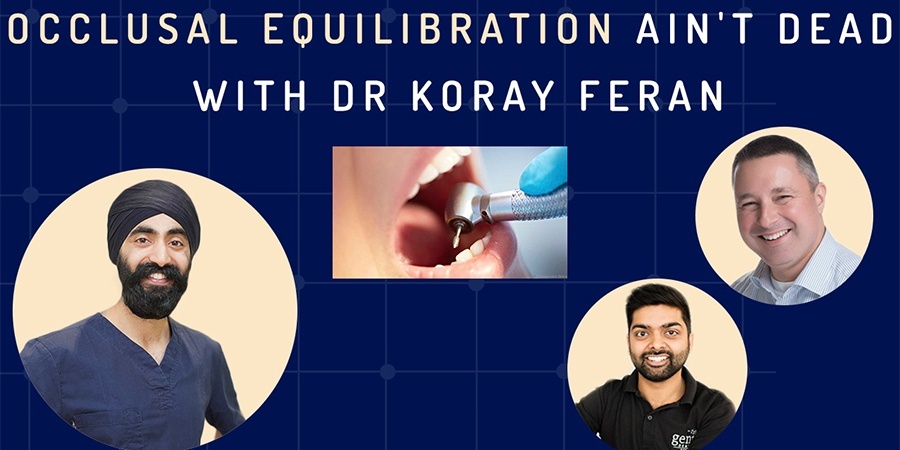 “Wait, Dentists still carry out Equilibration?!”, that was the reply in our recent discussion on the Protrusive Telegram group when I announced this episode. Yes, Saranga, they still do! The topic of occlusal equilibration is a very controversial one. In this episode you’ll realise the WHY and HOW an equilibration is carried out by one of the best Dentists I ever had a pleasure of shadowing (and also one of the most precise and OCD Dentists I know!) Dr Koray Feran.

Let us learn more about the potential benefits and challenges of equilibration with Dr. Koray Feran, who is a wet fingered practitioner of the highest calibre.

Protrusive Dental Pearl: When you have a patient who has a crowding and they want veneers, and you want to convince them to have some orthodontics first….. Instead of saying, “Oh, I have to remove this part of the tooth.” You could instead say “I don’t want to have to remove your healthy body parts to be able to achieve this goal.” Language is powerful!

“Equilibration is one bit of the pie, it’s a tool. It’s not a magical process. It’s to resolve a situation that you’ve diagnosed.” – Dr. Koray Feran

In this episode, we talked about,

If you loved this episode, you will definitely like If You’re Not In CR, You Will Die with Dr Kushal Gadhia!

Opening Snippet: And then suddenly you're through the enamel. Ouch that hurts. Equilibration should never be, never go through the enamel, never. Okay? If the equilibration has to go through that enamel you finally have to chop a large amount of a tooth. You should consider orthodontics or you should consider additive reconstruction to the whole occlusion. You shouldn't need to adjust three, four millimeters off a tooth. It's ridiculous...

Jaz’s Introduction: Equilibration is just one of those really controversial topics within occlusion and within dentistry in general, right? It can really split a room. Like the other day on Facebook and on the telegram group when I asked you guys which episode Do you want next? And I suggested we could have one about a Equilibration. My buddy Saranga said, Hey, we still do a Equilibration? I thought we didn’t do equilibration anymore? And I remember attending a BDA event. I think I was maybe one year qualified. And Professor, actually I was a dental student, and Professor Robert Ibbotson, who was there, you know, very experience towards the end of his career, restorative consult at that time, he said he hadn’t done an equilibration since 1984. And he thought it was pointless. Whereas I know other great clinicians who I really respect who carry out equilibration, a fair amount because they’re doing bigger cases, and they see it as a really vital tool, a really vital step as part of their reconstruction. So which is the right answer? Hopefully in today’s episode, you’ll get a bit more information about equilibration, which is actually really difficult to find if you open your textbooks or if you search online, it’s not much out there about equilibration, which is why I’m so excited to bring on an absolute superstar guest today. His name is Dr. Koray Feran, an absolute legend. I saw him lecture when I was just two months qualified, and I am pretty sure he is the guy that put me on the path towards really loving my dentistry and really wanting to improve bit by bit. He taught me that the two pillars of restorative dentistry are illumination and magnification, and I will never forget that lecture that inspired me and amazingly, eight years later, here we are, I’m now interviewing my hero, Koray Feran. I remember shadowing him actually, so I went to that lecture, then I shadowed him in his clinic, I think, it’s near Harley Street. It’s Wimpole Street. It was the first time I’d been somewhere where there were two nurses working for one dentist, so I’d heard of 4-handed dentistry, but I had just seen for the first time 6-handed dentistry and this beautiful screen in front of me where he was showing me the sinus lifts as he was doing it. It was just a crazy experience for a recent grad. The Protrusive Dental Pearl I have for you is a bit tongue in cheek in a way because I know we’re talking about equilibration, which is essentially the removal or the balancing of teeth via removal of tooth structure right? That’s equilibration. But the Protrusive Dental Pearl I’m giving you is a communication one. And it is this, it’s something that Ed McClaren taught me at the Tubules Congress as he was lecturing, when you have a patient who has a crowding, and you want to convince them to have some orthodontics because you think that by prepping for veneers, you will be too aggressive and you’re in root canal territory, which you never want to be you know, you never want to be in dentine for your veneers. So to get the point across a really good communication tip that Ed McClaren shared was you tell the patient, you don’t say Oh, I have to remove this part of the tooth. You say I don’t want to have to remove your healthy body parts to be able to achieve this goal. I don’t want to remove these healthy body parts. What’s a great way to communicate that? So I just wanted to pass it on to you and it’s really tongue in cheek in this episode, because you’re thinking okay, Jaz, you’re being really cheeky here because we’re talking about equilibration. But actually the other way to think about equilibration so it just ties in nicely is that there are some dentists who think that ‘Oh, I’m not going to do equilibration because I don’t believe in equilibration but I will prepare the 28 crowns, what’s going to be less invasive? An equilibration to get some balance or to get the “correct bite”, or 28 crown preps? So just think about where an equilibration come in. And sometimes equilibration is like partial equilibration. So you’re doing partly additive on one side, maybe and you’re equilibrating just a little bit so the overall you’re having to place less restrictions, but you know, this is everything that we’re gonna talk about with Koray Feran in terms of the workflow, the protocols, the whys, the why nots so hope you enjoy this episode. And yes, we have Zak Kara again. So you know, it’s gonna be a fun one. I’ll catch you in the outro.

Main Interview: [Jaz]
Koray Feran and Zak Kara, welcome back to the Protrusive Dental podcast. I hope you both well. Today we’re talking about equilibration and I just want to do a little bit of introduction for you Koray before you take it away. I’ve said this before on this podcast maybe two or three times now, but when I was in DF1 it was 2013 November, I think. And you did a lecture, I still remember the title of it is called excellence in restorative dentistry. And that two hour lecture you did was such a huge inspiring moment in my career that I just didn’t know you could practice like that at all like coming from like a dental school and then early on DF1, that was a huge needle mover for me. So it’s an absolute honor to have you on today. For those very few people because you are global, my friend, you are global, you’re well versed with the BARD and also European societies. And I know I think you’ve done some work in with Megan as well as that they’re pretty International. So please tell us a bit about yourself for those listening all around the world.

Jaz’s Outro: So there we have it, guys, thank you so much for listening all the way to the end, you now know about that dark evil side of a equilibration. I mean, I can count on one hand how many equilibratio I’ve done, because in my previous working experience, I’ve been influenced by hospital based dentistry. And a lot of the TMD literature which is made in hospitals is very much like controversial, like, Hey, don’t do equilibration because this is not effective according to the studies, but the studies themselves are not very high quality. So I do think there is a role like in everything we have to you know, keep our mind open. Everything has this place. Okay? Although it’s not mainstream, I do think a equilibration has a role. In fact, I’m investing at T scan I’ve just bought a T scan. And I can see equilibration becoming more and more into my practice, especially as I take on bigger cases. And as much of a controversial area it is, you have to keep an open mind to it. So that’s my philosophy anyway, you know, I like to listen to everyone and make up my own mind and my own practice. And I think it would be great to contribute to practice or to research one day, I was actually emailing Riaz Yar, Then I said Listen, I want to contribute to research. How can I test my splint theories? How can I produce some TMD data? How can I produce some outcomes based on Hey, can equilibration help? Or can this serve this type of splint be proven for this diagnosis eg myofacial pain. so I’m always thinking about it. So if anyone out there actually I’m just this is my plea to you. If anyone out there is involved in research and practice, I would love to do some of that. So please get in touch with me. Anyway, I hope you enjoyed that. The next episode will be on planning your CPD and not burning out. So you know it’s going to be a cracker. I’ll catch you then.