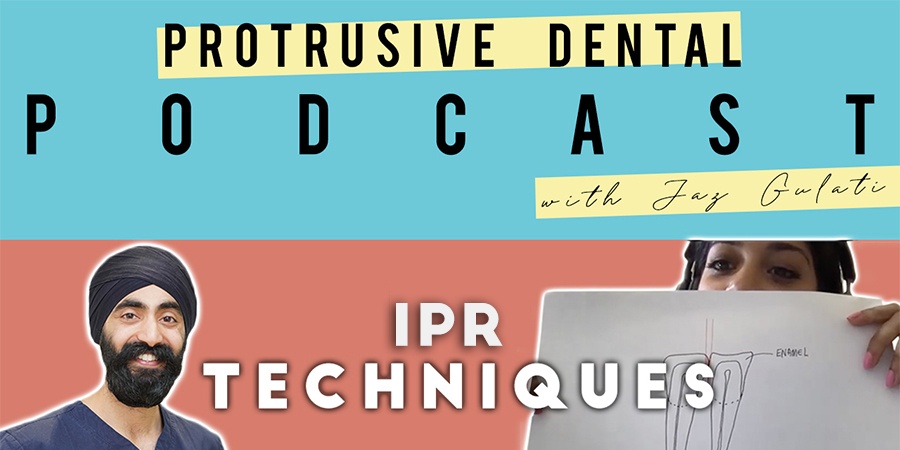 Interproximal reduction (IPR) is a useful way to create space in Orthodontics, but it has to be performed carefully to make sure it looks good and is effective.

If you are new to Orthodontics or have never performed IPR before – this episode is for you.

I am joined by Dr Devaki Patel, specialist Orthodontist, to discuss IPR techniques and the nitty-gritty details and answer the questions you always wanted to ask about IPR…but never did!

GDP Orthodontics has boomed in the last 10 years. More and more of us are treating orthodontic cases and often this may be referred to as Short Term Orthodontics (STO), or Anterior Alignment Orthodontics (AAO).

Protrusive Dental Pearl: If you view a ClinCheck or a similar 3D simulation, make sure that the initial bite/occlusion is set yup correctly. You will be surprised in how many cases this may be wrong and it has not been picked up!

If you are starting out with Ortho cases, IPR may be something that worries you. You may have questions like:

A really great and helpful guide to IPR

If you enjoyed this orthodontic episode, you may also enjoy my episode with Dr Almuzian on whether Class I molars are really that important?

I appreciate you all listening – do subscribe on your preferred podcast platform so that you do not miss the latest episodes.

Opening Snippet: You know, 9 out of 10 patients, they'll come in saying, I don't like this. And like you said, as the teeth straightening, they spend so long looking at their teeth, they'll find other things that are like. So it's just always worth gathering this information at the beginning, you know, as much as you can. And so you can exceed the expectations rather than under deliver...

Jaz’s Introduction: Do you remember when you had to learn a new skill? Maybe in dentistry, you are learning a new technique, a new procedure? Maybe you were learning orthodontics? What were the things that you’re most worried about back when you were starting out? Or maybe you’re thinking about going into orthodontics? What is it that worries you? You know, for me at the beginning, I have to say IPR was a tricky subject, because it’s not really the theory, because the theory makes sense. You know, you create some space, you move some teeth, the theories are fine. And we know evidence base suggests is pretty safe, if done well. And we’ll talk about that in this episode. But it’s more about the How to and How not to do it wrong. Because once you’ve seen the photos of when it has been done badly, then that’s all haunts you. So when you’re there doing your IPR, you’re under doing it at the beginning, you’re not doing, you’re not creating enough space, and therefore you’re not meeting your treatment objectives as fast enough. Or if your God forbid, removing it overzealously or your technique is such that it’s leaving your teeth in a slightly suboptimal morphology. So these are all the considerations I was having when I was starting out IPR. So then I consulted some mentors and a principal who was very helpful in helping me to do the right techniques using the Bur. My principle taught me how to use it. And I’m very thankful for that. It can be a topic that can be of concern to some people, because we all want to do a fantastic job for our patients. And we all want to do it safely and effectively. So this episode will hopefully cover a lot of the nuances of interproximal reduction for orthodontics. And I hope it helps, I’m joined by Dr Devaki Patel, who is a specialist orthodontist. And she’s gonna be showing us a few diagrams, a few of the strips that she uses, and how to use all these sorts of tools, when to use them, when not to use them. Because you know, it’s very much case dependent. Every case will come at you with this unique challenges. And therefore you have to adapt your techniques to be specific to that patient you’re treating. The Protrusive Dental Pearl I have for you is an orthodontic one, because chances are if you’re watching or listening to this, then maybe you’ve already started dabbled in orthodontics, maybe you do a fair bit of orthodontics already. So it’s only right that I make the pearl an orthodontic one. And chances are but nowadays, you may be using a clear aligner system of some description. Now, some of these clear aligner systems have got their softwares which they can emulate a virtual teeth if you’d like. So, some companies may call it clincheck. When you’re looking at your clincheck, the first thing that you need to do and the pearl is basically the first thing you do is check that the bite setup is correct. Because every now and then you get a clincheck back and you like to look at it, it’s looking good and you approve it. But you don’t realize actually right at the beginning, the technician who was setting up your case, either because they didn’t have the correct information or the best quality information, ie the setup wasn’t perfect for them, it wasn’t easy for them, they’ve set the case up wrong, which means that the occlusion that you sent them is not quite what is actually happening in the patient’s mouth. So my pearl for you is if you’re doing clear aligner system with a clincheck type of software. The first thing to do when you get your case back from the technician is check the setup. Make sure the teeth are touching correctly as they are in your patient’s mouth. Because sometimes they do get wrong and spotted this before and they get it wrong, then your whole treatment plan from there will not be accurate, it will be completely arbitrary, because it may align the teeth to some degrees, but it will not match the arches up. So that’s my Protrusive Pearl for you today. So let’s join Dr. Devaki and learn all about IPR.

[Jaz]
Devaki, Thank you so much for coming on the Protrusive Dental podcast. How are you? [Devaki]
Yeah, I’m brilliant. Thank you so much, Jaz, for having me. I’m so happy and excited to do this. [Jaz]
No, it’s gonna be a great topic. It’s IPR. So this is all about IPR. And the reason I wanted to discuss about IPR is because as I was saying earlier, sometimes when you’ve done something I’ve been doing orthodontic so for a few years now, got a diploma in orthodontics, and obviously you’re a specialist, we’re gonna come on to a little bit about your journey and stuff. But sometimes we’ve been doing something a while you almost forget where you disengage yourself with the struggles that you have the beginning and for me, one of the struggles I had is like IPR, like how to orientate your bur? Which strips to use? How to use them safely? And we know with being a minimally invasive dentist, you almost really worried about cocking it up. [Devaki]
Yeah, I completely agree. I mean, especially now we want to be conservative, you know, especially with IPR and something like enamel. You can never get it back once you’ve taken it away. So it’s something really important you want to plan it properly. You know, if you fail to plan you. Plan to fail, so. [Jaz]
Absolutely once you see photos or once you actually see clinically, some IPR that hasn’t quite gone to plan. That’s a really horrifying scene. So that’s why I’m really happy to be covering IPR. So we’re going to make this the most impactful content, hopefully audio and video on interproximal reduction. I do think with some of my episodes, the video version may have better value. But obviously, if you’re driving or you’re chopping onions or listen to something, then this is going to be hopefully useful to you still, because we’ll discuss a little bit about the history and the evidence base and the sort of risk and stuff but we’ll cover A to Z, and we’ll make it like you said earlier, Devaki, we’ll make it very clinically applicable. [Devaki]
Yeah, exactly. So it helps everyone. [Jaz]
Absolutely. So tell us a little bit about yourself, Devaki. [Devaki]
Okay, so. And I’m a specialist orthodontist. And I actually graduated my ortho training last year, so quite newly qualified in that. I did dentistry at Barts and The London and qualified in 2013. Then I did my foundation year, and I pretty much knew at undergrad that I wanted to do ortho, so everything after that was just ortho, ortho. Want to get in. And as you probably know, it’s just jumping after one who after another. So, after that I did a year in maxfacts. And then I did a year in pediatric community dentistry. [Jaz]
You did the very standard classic route.

Unknown Speaker
Standard, classic route exactly, you know, doing posters, publications, presenting that sort of thing. And because I knew what I wanted to do, and there is a specification of how to do your application, I just followed that really closely. And then I applied for training, I got in and went back to the Royal London again. And so yeah, really enjoyable. And I really love ortho. It’s amazing.

Unknown Speaker
Exactly. Yeah. And IPR in those sort of teeth is not really advice. Whereas if your central is kind of triangular shaped, then you can afford to take away tooth tissue near the incisal contacts. So it would lend itself better.

Jaz’s Outro: So hope you enjoyed that chat with Devaki all about IPR. Thanks so much for listening all the way to the end, as always, really appreciate it. If you’d like to suggest a topic, please get in touch. Follow the Facebook page or the Instagram page and let me know how I’m doing. I want to put on some good topics. I’m enjoying myself. Look, I love podcasting. I love learning from my guests. So it’s a hobby of mine and you find it’s bringing value to you. And please share it with your friends and suggest some topics that I could cover. Thanks so much once again.