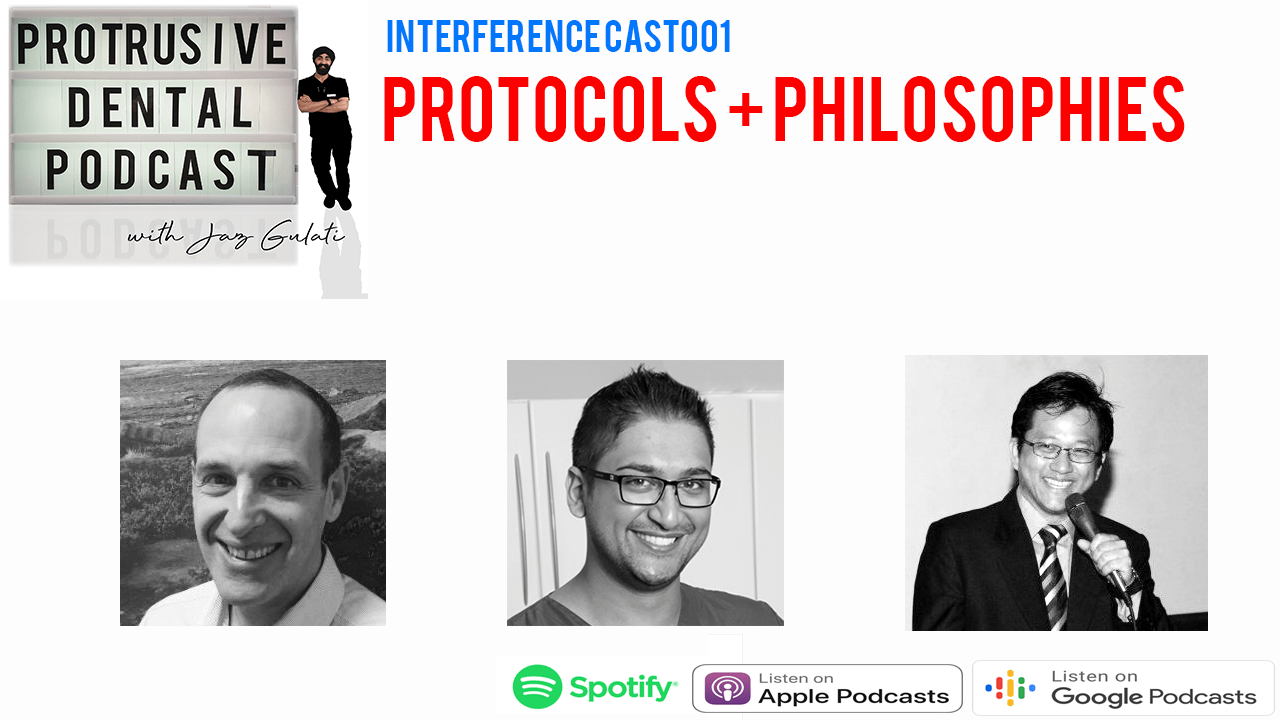 In this mini episode (interference cast – see what I did there?), I discuss about key lessons in protocols and philosophies I have learned from 3 awesome Dentists: Prof Nicolas Martin, Dr Rajiv Ruwala and Dr Jerry Lim.

Full episode also transcribed and on Video to watch, including my IGTV.

Jaz’s Introduction: So welcome to interference cast. This is one of my top podcast episodes where I disrupt in the middle of the flow of having guests. And I just ramble on about important things, or things that I think are important anyway. And I hope you gain value from these. So this episode, or this interference cast is all about protocols and philosophies. Three really cool people I’ve learned from and they’ve all had the same message, the same key theme, and I want to share that with you guys. And that is from three different awesome clinicians who have helped me in my career. It’s all about having protocols and philosophies. So let’s dive in.

Main Podcast: [Jaz] The first person was Professor Nicholas Martin from Sheffield, he was one of my restorative consultants, he was one of the academic leads at the university. And he’s the one who really planted the seed in my head. He basically taught me that with every procedure you do, you need to have a protocol. And that’s how you make procedures predictable. If you don’t have a protocol, then you do things based on your mood, or your nurse’s mood, and your results will be inconsistent. And you’ll never be able to pinpoint what goes well and what could be improved. Now, that doesn’t mean that you can’t change your protocols. And you can’t try different techniques. But it’s important to sort of make things consistent, so that you can pinpoint what is it in your practice that is being successful? And what is it that’s causing, let’s say, postoperative sensitivity, or pain, or any sort of restoration fractures or wherever it might be. So it’s like yourself auditing right? If you keep changing and chopping one day you etched for five seconds, the other day, for 45 seconds, it’s no consistency, you will never know what actually works. So it’s important to have protocols in place, and have them laminated somewhere, let your nurses know, so that they know exactly, you know, you know, sometimes when you’re etching, and then a nurse or leans over with the suction, it’s only been seven seconds. Whereas on a different day, the nurse will wait half an hour, 45 seconds until he or she leans over for the etch. And if you’re led by your nurse before your sort of wash, that’s not dentistry, you need to have a protocol in place, see to have a time is in place so that you and the nurse both know how long you’re etching for. That’s just an example. So that’s a first person who taught me about the importance of protocols.

So fast forward some years later, when I’d qualified and dentinal tubules, website was in his early days, and it had a forum which was very active, it’s now evolved. And it’s way past that it’s way bigger and better than the forum. Tubules is just a movement experience itself. So a dentist, who I really look up to is Rajiv Ruwala. He was posting a fair bit on the forum, and he actually posts a lot on Facebook, he were mainly saying on the dental groups. And again, I always, you know, I look out for his post because, you know, I respect what he has to say, he always has good, valuable input. So in his posts on the Dentinal Tubules forums, I was sort of scrolling down. And a question that he had asked a few times is, what is your protocol? What’s your protocol for this? And I really liked the way he thought his thought process was, he sort of echoed what Professor Martin taught me as well at dental school. And really, you know, I when I left dental school, I thought, okay, no one really does that in the real world. No one uses rubber dam. No one does it the way that he you know, Prof. Martin explained it. But then I met Rajiv and I had the pleasure of shadowing him a few years later, visit his practice. And it was just very inspirational. I loved how he streamlined his protocols, and his nurses are really well trained. And I’ve since learned the importance of following checklists and the correct training of your team to maximize your results. So thank you, Rajiv, for echoing that.

And so finally, the third time I received a really powerful message with protocols and philosophies was in Singapore. So as some of you may know, I spent a few years working in private practice in Singapore, which was just an amazing experience. If you wanna learn more about that. That’s Episode One of the Protrusive Dental podcast. I arranged a shadow probably the best known dentist in Singapore. That’s Dr. Jerry Lim. Check out some of his work on online just google Dr. Jerry Lim. He has such a beautiful practice very advanced all the toys you could wish for. I sat down with him to pick his brain, you know, I was almost starstruck because I’ve seen him lecture a few times in Singapore you know he’s very, very kind to allow me to go and shadow him and just wow, I mean, his clinic was just probably the most beautiful clinic I’ve been to. It’s like a tall building in Orchard Road, which is like the main like equivalent, let’s say, Oxford Street of Singapore. Beautiful establishment. So what he saw when I was picking his brain, I asked him, okay, you know, which ortho system should I use? And which occlusion philosophy Should I learn? And, you know, that sort of question when we Were Young dentists asking away, were still very much into occlusion then and even more so now. And what he told me was brilliant. He said, Jaz, listen, have a philosophy. And it doesn’t actually matter which philosophy you follow, just have a philosophy. It doesn’t matter if it’s Kois, Dawson, Pankey, god damn it, it doesn’t matter if his neuromuscular dare I said, he taught me to immerse yourself in a topic and don’t go half assed go all in. So he said, Jaz, it really doesn’t matter. But whatever you do go all in. And it doesn’t matter which philosophy you have, just have a philosophy. So that’s a really important lesson right there. It’s actually if you’re sort of picking and choosing different paths, different philosophies, that’s cool as well. That’s what I’ve done in the moment. But thing is, I’ve adapted that as my own occlusal philosophy. So if you ask me, What is your occlusal philosophy? I’ll come and we sit down with you and explain five minutes exactly what my occlusal philosophies are.

So have a philosophy don’t just make things random, it’s always the same theme as having protocols, and being consistent and being predictable. So it just means that you have to, for example, let’s say you’re using a new resin cement. But actually, you have to read the instructions for use, I mean, how many of us are guilty of using products and we’ve never read the DFUs, or you just follow what the nurse tells you to do. That’s not how it should be, that’s dangerous. I certainly make it a habit to every time I encounter a new product or a trade show, it’s boring as hell but you actually gain the proper way to do things. And that’s very important in improving your predictability. So go all in with everything you do, including having philosophies on different subjects, philosophies on materials, and actually well informed by the DFU for example. So going all in also means that you don’t just settle for one opinion, or one weekend course, we owe it to our patients to have in depth knowledge and clinical confidence in what we’re doing. So thank you for listening to my interference cast. I hope you enjoyed that.

Jaz Outro: Thank you to all those three dentists Prof Nicholas Martin, Rajiv Ruwala and Dr. Jerry Lim, for influence me in a really positive way, and for getting those points across to me, which I’m sharing with you all now. Join me for the next few episodes. Thank you for listening.