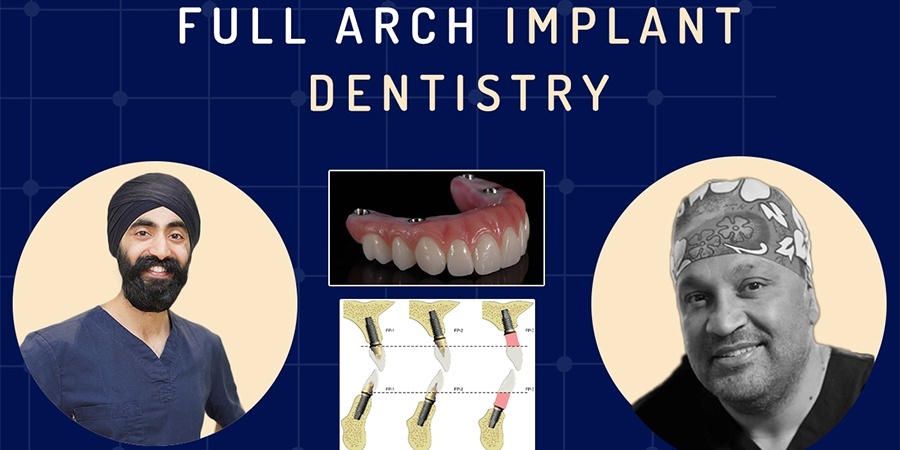 I think we owe it to our patients to a know some fundamentals of full arch implant Dentistry, even if you do not currently place or restore implants. Make a big cup of coffee because this is one of those longer episodes! I am joined by Restorative Specialist Dr. Harpal Chana to breakdown FP1 to RP5 and exactly what GDPs should know about full arch implant prostheses.

Protrusive Dental Pearl: Instead of booking patients for a ‘fit appointment’ for crowns or bridges, rebrand it to ‘try-in appointment’. This takes the pressure off of you and your technician – in the small chance that things are not perfect, you can correct it and book their fit. If everything is good at the ‘try-in’ you can go ahead and fit your work definitively. It’s just a good way to manage expectations and reduce the chance of disappointments and surprises.

If you liked this episode, you will love to listen and learn about Implant Assessment for GDPs: from Space Requirement to Ridge Preservation

Opening Snippet: And one of the procedures they always used to make me do was to do a workup make them a new set of dentures. And it was interesting that half the patients I made new dentures for say, thank you very much. I don't need implants now. I'm actually quite happy with these. And they're much better than they were before. I really don't think I want implants. So okay, maybe a lot of these patients don't always need implants. They just need to have well fabricated dentures...

[Harpal]
Thank you for you time as well it’s great to be here.

Jaz’s Outro: There we have it, Harpal Chana everyone, I hope you found that useful. I hope you were making notes. It’s kind of one of those episodes where you have to go back and maybe make notes. But hey, don’t worry if you didn’t, because I’ve got an infographic for you so I’ll finalise or summary, hit the @protrusivedental Instagram, and I put a little infographic on there, also on the protrusive.co.uk website. And some big announcements coming very soon, including, so I know many of you will listen all the way to the end, but many of you will just you know switch off at this point because it’s me blabbering on. However, if you get to listen this bit, I have a secret for you. The secret is that the Protrusive app is coming out very soon and on there I hope to make it a little home for all the different infographics, PDFs references that I share. So it’ll be an easy place for you to catch that up. Anyway, let’s keep that secret for now. And I’ll catch you in the next episode guys. Thanks so much for listening.

Episode 117
What We Ought To Know About Full Arch Implant Dentistry – PDP093
Loading Comments...