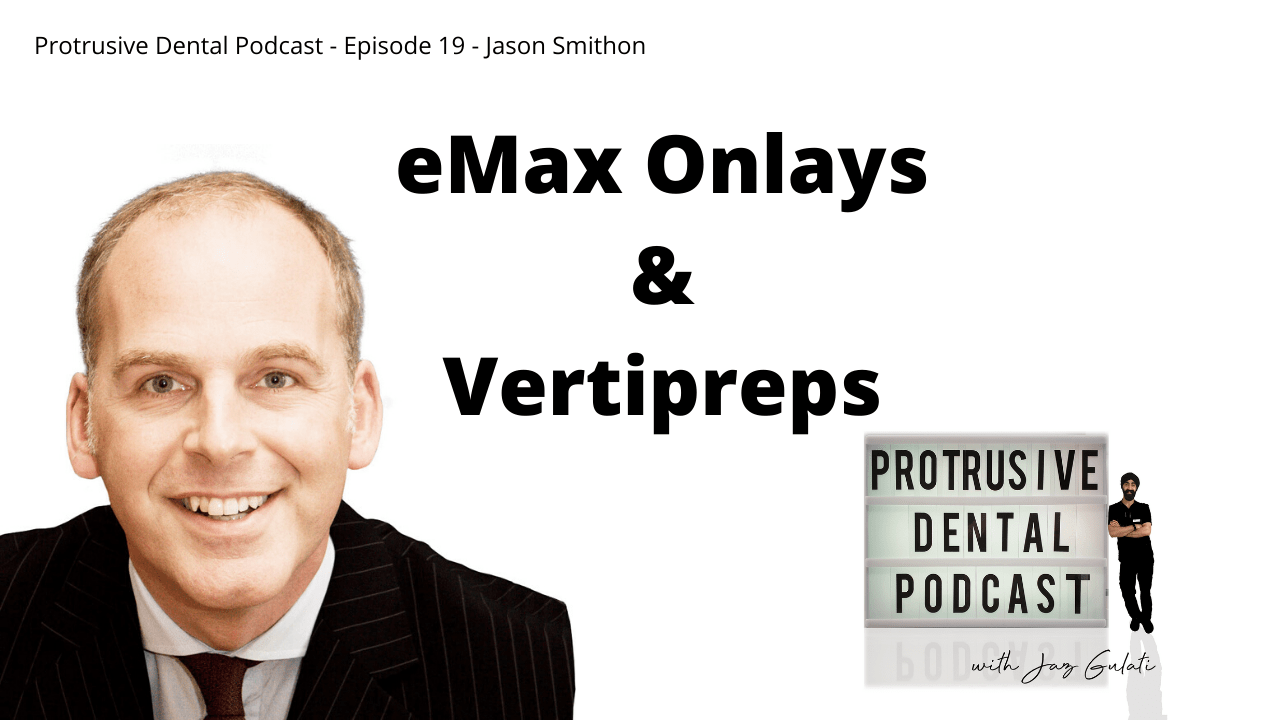 In this mammoth episode (boy, it’s a long one but I hope you like it!) we have the legend that is Dr Jason Smithson.

If you are a Dentist and have not heard of Jason Smithson, you have been living under a rock!

The calibre of cases that Jason posts on Social media and lectures is always unbelievable and we as a profession learn a lot from from him, as well as the courses he runs. I went on his Onlays and Veneers course about 4 years ago and I was really engaged throughout the entire 2 days.

We will be talking all thinks eMax onlays and vertical preparations.

First half we discuss all about lithium disilicate onlays including:

And we also discuss a gem right at the end about how I help to improve the longevity of my anterior work by a simple trick that takes 4 or 5 minutes with only with a disc….and Smithson agreed it is a good thing to do!

Resources shared with this episode on the Protrusive Dental Community Facebook group:

Those of you who follow me on Instagram (@jazzygulati) or like the Protrusive Dental Podcast Facebook page (I’m pretty active) will have seen the news that starting from the next episode (which by the way is with none other than Kushal Gadhia) you can get enhanced CPD!

My guest and I will produce A&Os and have some questions for you to answer. The only caveat is you have to be a Dentinal Tubules member – if you listen to my ramblings, you either LOVE dentistry or you WANT TO TRY to love dentistry or you want to reignite your passion, and that’s exactly what Tubules is about and I am provide for them to quality assure and issue my CPD.

For information about Jason Smithson’s next courses, visit:

Opening Snippet: Too many people start a wear case by slapping some composite on the teeth. And really what you need to do is take a step back and work out why they've got a problem...

Jaz’s Outro: So thank you, again, for listening all the way to the end. I’m sorry, if it was a bit echoey. Jason was recording it in a large room. So I’m hoping my editor managed to get rid of that echo, magically. But if it was still above echo there, I apologize. Not the usual crisp quality that people told me about. So next episode is with Kushal Gadhia, I’m not going to tell you the title, it’s going to be a funny one, it’s gonna be a good one, a very relevant for daily practice, but it is on the theme of occlusion. And it may or may not involve a certain joint. A lot of you’ve also been recommending guests to me that you think will be good. And I’m starting to contact them and everyone said yes, so far. So I’ve got a great lineup coming up. One thing I’m also very sort of forward thinking about, I suppose is, or rather I’m mindful of is that a lot of the speakers I’m having on, you know the beginning had lots of female speakers, which is awesome. Then I had lots of male and now it’s getting a bit male dominated. And I think there’s such great women in dentistry. So I’ve already contacted some really, really inspiring female dentists. Is that political correct? Female dentist? Women dentist? Women in dentistry. I think they have so much to offer. So that’s gonna be happening in my podcast future episodes as well. So please tune in. And I’m sorry, if there was any confusion about the sort of splint course I’m doing in Patcham. It’s actually two dates. So you can either come on the 1st of February, or the 29th of February. They’re both Saturdays so it’s not a two day course or a one day course. But if you want to come along, you can do just give me a DM, message me and I’ll send you the link that you need. And lastly, if you liked what you heard, and you want to go to one of Jason’s courses, I’m gonna put the link up in my blog post which will be on www.jaz.dental underneath this podcast episode, so you can go and went on this video prep course which I’ve been dying to get to. I can’t make the April dates, it’s my sister’s birthday, but hopefully we’ll do another one the UK if not I’m on heavy travel because you know I love mixing travel and dentistry, it’s tax deductible, holidays to me at the end of the day. So yeah, you could check that out and thank you so much for listening.