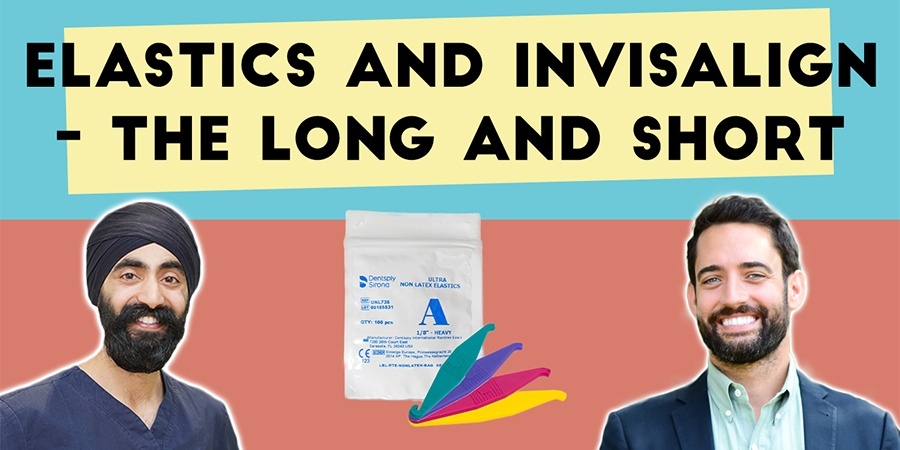 Elastics for Invisalign – The Long and Short of it [STRAIGHTPRIL] – PDP070

As you get more experienced with clear aligner therapy you learn a universal truth about those pesky lateral incisors that will refuse to extrude! I am joined by Dr Robin Bethell from Aligner Nation to help us learn more about the use of Elastics as auxiliaries for Clear Aligner protocols.

Protrusive Dental Pearl: The Bethell IPR Technique! Click Here for the Video of how Dr Bethell uses the bur for IPR

Interestingly, Dr Robin Bethell has not used intermaxillary elastics for over 3 years. He primarily uses them for vertical movements. I personally have used them extruding lateral incisors, which works very well. Here is the video to share how to extrude lateral incisors with elastics:

if you enjoyed this, you will also like Comprehensive vs Compromised Orthodontics as part of the Straightpril series!

Opening Snippet: Over the years i've realized what is best for me to do and what isn't. I think that a lot of general dentists get in this and because invisalign looks like magic. It truly like it's amazing that plastic can do this. They get in over their heads a little bit and i can see why some orthodontics get upset...

Jaz’s Introduction: Hello, Protruserati, I am Jaz Gulati. And welcome to another episode in this orthodontic month. This episode is focused on Invisalign and elastics. Like one of my most popular episodes before was IPR, like getting into IPR and the nuances of that. And I feel that one of the biggest pain areas of dentists who are getting started with aligner treatment or even experience with aligner treatment is using elastics. Now whether it’s to extrude lateral incisors, which is the way that I learned to use elastic with aligners, or to use them in intermaxillary. So from across the arch, so for example, class two or class three elastics, we’re going to cover that with someone really cool. His name is Dr. Robin Bethell. He’s based in the US. He runs the Facebook group aligner nation, which is just phenomenal. You guys should totally follow it if you’re not part of that already. And I’m going to ask him the nitty gritty details. Now, this episode is an amalgamation or a marriage of part one and part two, because when we first record, it was going really well. But then there was a storm in Texas of all things. And this storm in Texas meant that we had to cut short because he was having signal issues. So we rearrange, and a few weeks later, we thought we’d take two, but the biggest shocking thing you might hear today is the fact that actually, should I ruin it or not. Should I continue shall continue saying I’m saying, Okay, fine. I’ll give you the spoiler. Okay. But there’s more to it in this episode, I promise you, but Robin basically said that the wealth of evidence that we have, and the position statement we have is that intermaxillary elastics, like class two and class three elastics, they don’t really add very much into your aligner treatment. So that was a massive shocker. Because you know, every time I have a guest on a podcast, and I prepare like three or four questions, my first question was, Okay, tell us about elastics and aligners. And then the second and third and fourth question was like the nuances, okay, which ones do you use for class three? And lastly, how do you stage it and that’s quite kind of stuff. But can you imagine how shocked I was one of the first question he says, Now, don’t bother using it. I haven’t used it for three years. I was like, What? It’s, that’s crazy. The protrusive dental pearl I’m gonna share with you is a video technique, like the most commonly asked question I get sometimes based on the IPR episode is Hey, Jaz, can you just like make a video of IPR and never get around to doing it? Because that was like a big pain area when I was starting using burs for IPR. Like, as a general dentist, like I love enamel, you will love enamel right, and won’t be as conservative as possible. So when I got to terms of using a mosquito bur, I was really worried initially is Oh, my gosh, you know, I’ve seen some example radiographs for where it’s gone totally wrong, right. So I’m going to share with you the guest we have today Dr. Robin Bethell. His ‘Dr. Robin Bethell Texas IPR technique’, which is basically using red mosquito bur and it’s just a way he does it like if you’re starting IPR with burs, if you watch this video, it will give you a bit of clarity. And you still need to use magnification you still need to be careful, I think, but sometimes by watching someone else do it. But in the video is good enough quality that I think you get the gist of it essentially if using the bur in a certain way, and then doing the rest of it in what he used a space file, sort of strip and you can use any sort of IPR strip you want. But you open up the embrassures with the bur, and in the final bit of enamel use IPR strip. Hopefully I’ll get to video at one day as well. But since Dr. Robin Bethell, our esteemed guest today has already done that hard work for us. I’ll be more than happy to share that. So Dr. Robin, thank you so much for all this amazing content that you make. I’m so stoked that we have him on today. So this was done live guys. So excuse any shoutouts. And again, if you’d like the live stuff I’m doing, do check out the facebook page, which is a protrusive dental podcast Facebook page, if you’re not already following the Instagram, it’s @protrusivedental. So I’ll catch you in the main episode. And I’ll see you in the outro.

Episode 89
Elastics for Invisalign – The Long and Short of it [STRAIGHTPRIL] – PDP070
Loading Comments...