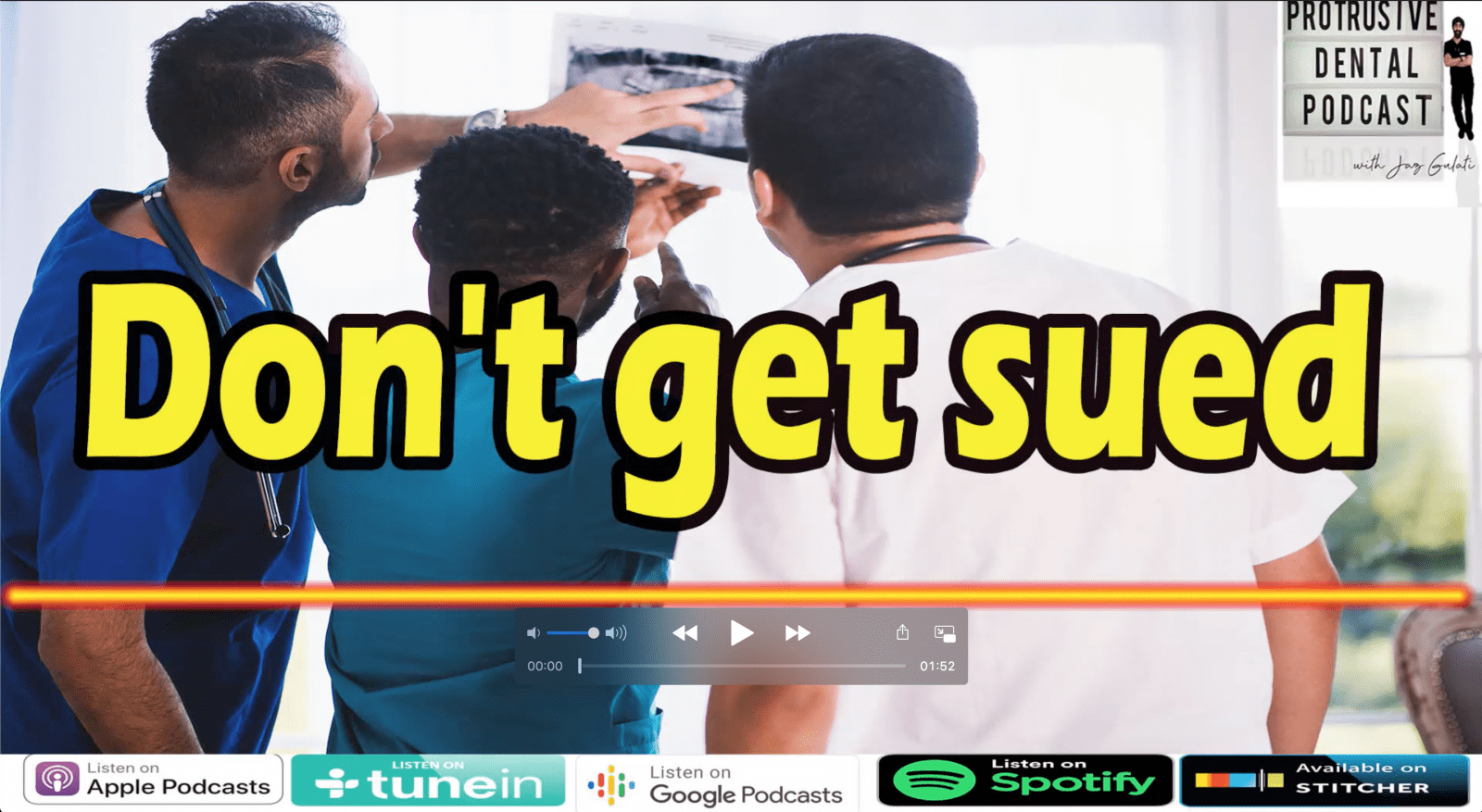 I am joined by Dr. Stephen Hudson of Dental Law and Ethics Blog

Download my EXACT examination Custom Screen for free! (I had to move the link to the Facebook group where you fill find all the custom screens – wait for group approval)

In this episode we cover:

The over arching theme of this episode is the importance of building rapport with your patient!

Opening Snippet: So there's been a lot of hoo ha about Montgomery because initially we were afraid about it. But what's happened?...

Jaz’s Introduction: Hello everyone and welcome to the Protrusive Dental podcast, it’s Jaz Gulati here. Today, I’ve got Stephen Hudson on the show, we’ve been talking all things about like consent forms, notetaking, how not to get sued, the relevance of Montgomery, Who the hell is Montgomery? You’ll find out today, like I did, I thought Montgomery was a guy, right? It’s actually a woman. So there we are. I’ve noticed that actually, a lot of my listeners are starting to message me with recommendations for who they think that should come on the show next, and I’m actually loving it. So please, if you’ve got any suggestions for topics, I’d love to hear it, I’ve got a good list of speakers coming up and guests on the show lined up for you. But if you think something would be beneficial to the audience, then please come with the suggestions. Before we dive into the episode I will give you the Protrusive Dental pearl for today. And that is going to be a gift to you guys. It is my custom screen for taking comprehensive examination notes. So for my new patient examination, I try and make it fairly comprehensive. It’s not ott it’s pretty detailed. And you know, you can fit in what you want. But basically the the benefit of a custom screen, if you never heard of a custom screen is on Exact, Software of Excellence , Exact. You can actually have a way of collecting notes where instead of having to have like a template where you’re adding and deleting stuff, I’ve converted it into like tick boxes and drop downs. So it actually makes it really easy for your nurse to follow what you’re doing. And like for example, molar classification, you can just drop down click class two whatever, you can select your sort of incisor classification, you can have the BP code within the custom screen, you can take where the radiograph is grade one, two, or three on page two of the custom screen. So basically, custom screen is a fantastic way of collecting notes efficiently. And also notes of very good quality. So I’m going to share with you my custom screen, the story of how I got to make my custom screen was basically I was a bit poorly last Christmas. Basically I hate doing nothing right? So I was in bed, I was super sick. So what the hell can I do anything I can move. So I got my laptop, open our log into exact. And I was able to bust out for hours and make this custom screen. So I know I worked really hard on this custom screen. But it’s not perfect. I realized that for example, if I could go back in time when I get some time. The next thing I’m gonna add on this custom screen is patient’s goals. Patient’s goals are so important in treatment planning, and I’m always having to add it on somewhere, I’d like to have a dedicated place. So it’s not perfect, but I’m hoping it’s going to really improve the note taking. So if you’re using software of excellence or exact, then you can download my custom screen, and you will probably find a way. I mean, I can’t tell you the top my head how to do it. I’ll probably include this in my instructions on the website and how to actually install a custom screen and use it and maybe like a video, that’s a good idea. Actually, I’m gonna put a video on how to install and use this custom screen. So I hope you like it. That is the pearl for you today. So let’s join Steve Hudson for today’s episode.

Jaz’s Outro: Thank you very much, guys, for listening all the way to the end. I really appreciate it. I hope you like my custom screens. I’ll make it available to download on my website will be on www.jaz.dental/customscreen. That’s all one word custom screen. So now you’ll be able to download the custom screen. It’ll also be on my normal under the of the blog post for this episode. I hope you find it useful. Give me some feedback. See what you think. And if you guys have got like, if you guys in the Protrusive community have got good custom screens and you want to share them with everyone, please send them to me I’ll happily like make it make a page on websites we can all share our customer screens because look if we can all help each other, record better notes more efficiently, then that’d be amazing. Apologies if you’re an All for though, I realized that I haven’t really given you guys anything. Sorry. Once again, thanks for staying at the end. And next episode will be with Jason Smithson. And we’re talking Emaxs onlays and vertical preps, vertical crowns, which is really really good episode obviously pre recorded. We’ll be launching that soon. Tickets for occlusion 2020 are pretty much almost sold out. So hence why I’m not really promoting it that much anymore. You can be seen a massive drop in the ads. I’m running on Facebook. So thanks so much for those who’ve booked and I’m looking. We’re so stoked for May. It’s gonna be the best occlusion event ever. So we’ll see you then.