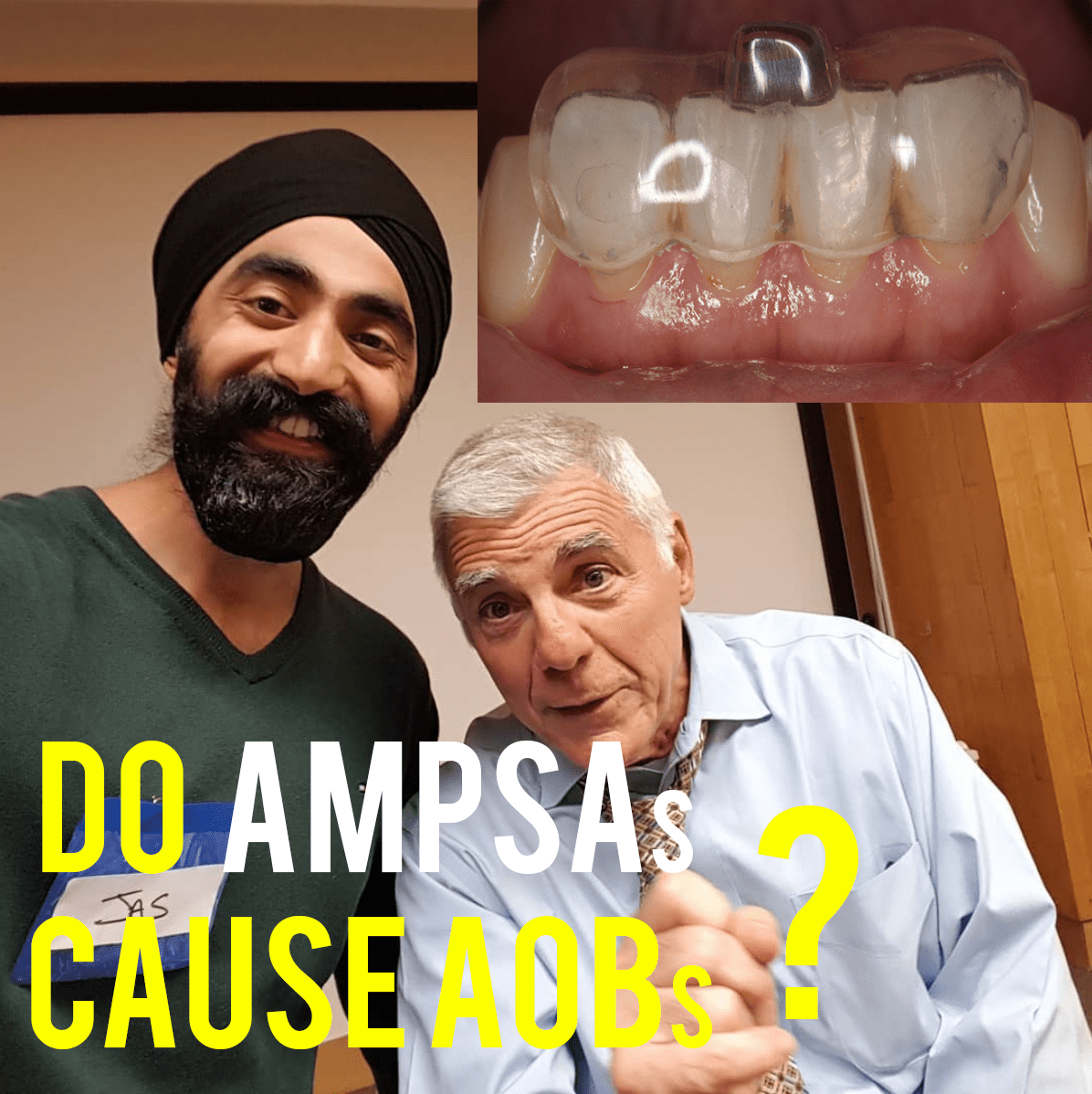 2021 UPDATE: If you want to learn more about Splints, check out the SPLINTEMBER Series I recently did:

Which is the Best Dental Splint?

Stay Away from TMD

Pre-register for the Online Splint Course which will get rid of Splint confusion and teach you theory and practical you need to know to be confident with Splints (all types!)

The use of anterior mid-point stop appliances (AMPSAs) in Dentistry is surrounded with controversies and misconceptions, so I am joined by Dr Barry Glassman in this episode to answer this much debated question.

In this Episode with Dr Barry Glassman we discuss:

TLDL (Too Long Didn’t Listen): Jump to 22 mins and 30 seconds if you want the main question answered.

Protrusive Dental Pearl: The BRB technique for incisor Class IV build ups to create an ‘instant wax-up’ within the putty. You can read more about this technique at Style Italiano.

Do not miss out on the next Dentinal Tubules Congress in October!

If you want a substantial online training for Splints, the Online Splint Course is just weeks away from launch!

Opening Snippet: Most of us, unfortunately go to lectures to have what we already know. Justified. So as long as long as someone is telling me what I know and is what I'm doing is right has been right, then I can take on a new parole or something and add to it. I'm comfortable with that. If someone's telling me that what I've been doing may not be right, that's upsetting. And what I've been saying, Jaz, for years is that I'm not saying that what you've been doing is right...

Jaz’s Introduction: Do anterior midpoints stop appliances cause anterior open bites? Right, so if you’re unfamiliar with these appliances, it’s basically a night guard that only covers that say, 2-2 or 3-3 or 5-5. And there’s many combinations and you know, opposing and whatnot, a larger, smaller, but essentially they don’t cover all the teeth. They are segmental appliances. And the classic version of it, for example would be like an NTI or in the UK is known as a SCi, sleep clench inhibitor. Other versions are available bite soft, FOS which is something I use quite a bit or B splints, there’s loads of different types. So if you’re listening to this podcasts, and you’ve sort of clicked on to find out if these sorts of appliances, cause anterior open bite probably you’ve come across or seen photos, or perhaps you use these cautiously, or perhaps you use this freely, let’s find out. Basically, if the back teeth don’t touch the muscles switch off. That’s essentially how it works. So you’re biting together on the night guard, you’re biting only at the front, the back teeth don’t touch the muscles cannot contract efficiently with the power that they can do when back teeth contact. Why did I do this episode? It’s a huge discussion point full of controversy. Basically people are convinced that these sorts of appliances, imagine one example covering 2-2 will cause an anterior open bite by the posterior teeth over erupting. So I invited an expert in this field in oral facial pain, Dr. Barry Glassman to speak on this topic to give clarity on where these appliance do actually cause such issues. Today’s Protrusive Dental pearl, BRB technique, okay, this is for class four composites or any sort of build up in composite. It’s not the ‘Be Right Back technique because a brb might be, it’s actually called, but Bertholdo/Ricci/ Barrotte (BRB) technique, and it’s shortened to BRB, if you have someone who has had a class four fracture, let’s say and you need to do a nice build up and you want to do a layered approach. Usually, classically, you’d have to do some sort of a wax up and then may take a putty stent on both wax up and then transfer it on, therefore you’ve got your palatal thickness, and therefore you can build the anatomy into the putty index now. So with the brb technique, you’re basically negating the need for wax up, you take a puttyy index to include the fracture tooth, you’re just taking the putty index of the situation you have in front of you, including the adjacent teeth so that you know later you get a positive seat of the stent. And then what you do is with a pencil you draw on the putty where you would like the incisal edge to be, you basically use the adjacent teeth as a guide. And then using a round ended tungsten carbide bur, you remove the silicon putty where you’ve demarcated with a pencil. So essentially, you’re creating the wax up with the bur into the putty. And there we are, you have your instant wax up within the putty to actually build the class four fracture to the correct shape and morphology using a layered approach. So it’s a neat little trick, and I’m going to share that on the blog www.jaz.dental. And you’ll be under this episode in the show notes which you can download as a PDF. So let’s listen to the interview with Dr. Barry Glassman. And for the record of the time of production, I have no financial interest with s4s or Dr. Glassman seminars, some of the terminology and ideas that Dr. Glassman shares can be quite difficult to grasp over audio at the first listen anyway. And quite high, I thought was quite high level expert knowledge he shares with us and some of it went beyond me as well. But I’m hoping that this will settle the debate about anterior midpoints stop appliances and whether they cause anterior open bite.

Main Interview: [Jaz] Thanks so much for agreeing for this honesty it was like I don’t know if you’re into sports and football but it felt like in the last minute of the transfer window in football when you manage to to sign a new player and everyone’s really excited. So that’s how it felt like to me.

Jaz’s Outro: So thank you very much for listening, everyone. As you can see, I really enjoyed having Dr. Glassman on the show today, was really useful, great knowledge. And so we have the answer. Anterior midpoint stop appliances will not cause anterior open bites because of posterior over eruption per se. However, in a small percentage of cases, with any appliance and including anterior midpoint stop appliances, you can get anterior open bites. And the mechanism is not posterior over eruption, it’s a change in the trajectory of how your teeth come together. And there are certain sort of risk factors that might predispose you to having an anterior open bite, and that’s covered really well, obviously in our conversation with Dr. Glassman. And the thing to remember, I suppose, is as Dr. Glassman says the punishment should not be worse than the crime. So try not to use it in asymptomatic cases or those with minimal overbites. I tend to use them for my pain patients or those I want to deprogram diagnostically. Well, thanks so much for listening. I just want to mention before you go about the Dentinal Tubules Congress in October, if you haven’t already booked, what are you waiting for? It’s something that you know, I look forward to every year and I hope to see you there. It’s got some great workshops including occlusion, complete dentures, preparation where they sort of scan the teeth at the same time you get like instant feedback. So all these workshops still aren’t available at time of recording. So check out Dentinal Tubules Congress in October, and I look forward to seeing you there. I’ll put the link in the bio. Thank you.