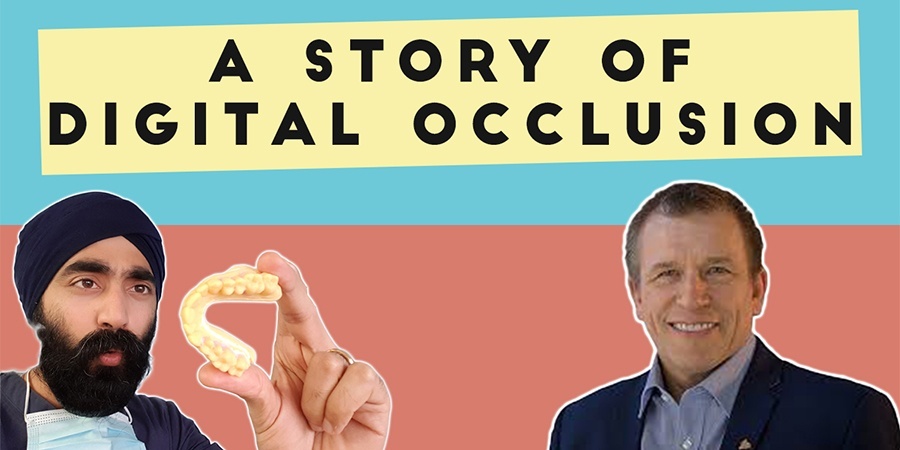 A Story of Digital Occlusion – PDP057

Is it time to ditch the analogue occlusion tools like facebows in favour of Digital Dentistry workflows? In this special feature episode with Ian Buckle, we will explore the world of Digital Occlusion.

Protruserati, get your onions ready for chopping (lots of them) – this is a behemoth episode!

We tackled a lot of key themes, include Specialising vs Private courses route (a common question I get sent by Dentists).

One of my fav quotes from this episode:
‘If you don’t have a clear goal, don’t be surprised if you end up somewhere you didnt expect’ – what we can learn from this is to MAKE a best guess!

I also mentioned how it was through Ian that I learned about the FACE Group (Roth) of Orthodontists. These are Orthodontists who are well versed in articulators, facebow, occlusion and ‘stable condylar position’ (or Centric Relation, to many!)

There are a good few gems in here about face scanning apps, use of photography, inciso-facial mock-ups, but my favourite gem I want to share on this blog is this:
If you record your bite registration AT the DESIRED vertical dimension, you will eliminate any errors in opening the bite on an articulator/digitally. You may need to read that again or listen to that part of the episode again. Once it sinks in, it can be a ‘ah-ha!’ moment.

If you want to find out more about future courses by Ian, check out his website.

The SplintCourse is just weeks away from the launch offer – have you signed up for the big update?

If you liked this episode, you might enjoy the Posterior Guided Occlusion 2 parts with Dr Andy Toy!

Opening Snippet: Which is complete dentistry and full mouth rehabs or whatever you want to call them only happen when the patient says yes. And, you know, we as dentists are dreadful communicators. And we say things like oh Mrs. Jones, you know, you then need 17 crowns you need to have equal intensity contacts and posterior disclusion and this this, this. So when would you like to get started? And we wonder why they don't do. Digital is a fantastic communication tool...

Main Interview:
[Ian] There’s still that it was very basic, it was pretty basic dentistry in those days. And then, you know, I sort of moved on to get a little bit more interested in dentistry. And the probably the first thing that we were able to get better at if you like, was endodontics when rotary just came out. And despite what many people might think about me, maybe you as well, Jaz, as I’m quite shy person and I bother going to six text. Well, you know, I I’d say yeah, you know, I was brought up in the generation with my grandmother saying children should be seen and not heard. So I knew my place. But, so I went to this section 63 meeting, and I was, I thought it was very interesting that I could get good at this. And I wanted to provide good care for the patients and also have an interest for myself, you know, there was a selfish part in there as well. And so I stay behind waited till the end. And I said to the guy who happened to be the dean as well, you know, I’d really like to get involved, what is it I need to do? And it’s just like, well, it’s a three year course, full time. If you don’t like it, you know, you tough luck. And, you know, I was extremely disappointed, you know, because, you know, I had a young family at the time, you know, mortgage like everyone else, all those things. And it was, it really just seemed like a massive obstacle and you know, I didn’t know how to get past that. You know, always like to mention my friend Mike Horrocks at this stage because Mike was round. He was a year older than me but he went and got on with it and did it. And what he’s done with his endo stuff, I think is fabulous. And the way he’s encouraged practitioners to, you know, say, look, you know, let me show you how to do a better endo, and then and then it gets people interested, when you get someone interested, then they start really getting into all the other stuff in the research and there’s different ways of doing it rather than traditional three years, study some stuff and then come out on the you know, everything. You know, I think there’s a great way of learning. I think a lot of us. I think a lot of us in dentistry have a practically based so we like to do something and then when we’ve done it, then we like to find out how did that come together? So that was, that was my first sort of thing, you know.

Jaz’ Outro:
I really appreciate that. Thanks so much, Ian. And I will catch you at the Digital Course. Thank you. I hope so. Thank you. There we have it, I did tell you that you would love his stories. And I really hope you gain value from that. As always, I really appreciate you listening all the way to the end. If you could do me a massive favour and go on YouTube, hit that subscribe button and whichever podcast platform you’re listening from, please hit subscribe and please tell a friend. That’s how the podcast grows. Next episode is going to be awesome. It’s with Payman Langroudi all about whitening in a way that you’ve never thought about before. Like how can we do more whitening, why we shouldn’t be doing more whitening and few tips and pearls to get better successful teeth whitening outcomes. SO come and join me in that one next week. Same time, same place.