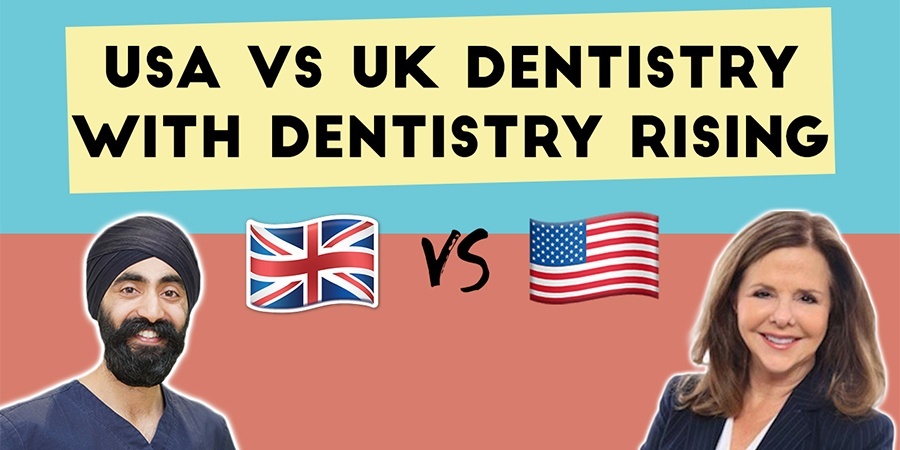 A fun little comparison episode discussing the differences between Dentistry in the States and in the UK – in this episode I am joined by the host of Dentistry Rising podcast, Dr Bette Robin!

Dr. Bette Robin, who desired to make a massive change in her life and left clinical Dentistry some years ago and went in to Law and practice sales – she never looked back!  Join us in this light hearted discussion where we chat about:

SplintCourse update: Enrolment ends on Monday 21st June! Enroll now by clicking here to join a community of Dentists around the world who want to End Splint Confusion!

If you enjoyed this episode, then do check out Dr. Bette Robin on her Dental Rising Podcast

You might also enjoy The American Dental Dream – PDP002 with Dr. Kristina Gauchan!

Jaz’s Introduction: Hello, Protruserati. I am Jaz Gulati and welcome to this interference cast all about the differences between UK and US dentistry. It’s quite a light hearted interference cast view today with someone very special. Her name is Dr. Bette Robin, and she’s the host of Dentistry Rising podcast. And it’s from podcasting. And her being a dentist actually doesn’t practice dentistry anymore, which is actually interesting. So we’ll discuss that in a moment. But her also being a podcaster in the dental niche, we sort of connected on this software podcasting platform. We joined this weekly mastermind all about communities and online courses. And we’re both part of that. And what are the odds that two dentists, who podcast who re also interested in running successful online courses were eeting together. So that’s what he story of how I got to meet Dr. Bette Robin. And then I got o listen to her podcast and t’s really great. I really like er voice actually. So we had a ery light hearted discussion bout the differences, the ultural differences in USA ersus UK as a dentist, what are he earnings like? What are the iggest barriers like? One hocking thing for me was the evel of debt that US graduates an land themselves in. But also he understandably was quite hocked to learn about how the ational Health System works ere in the UK. So it makes a ery interesting sort of fly on he wall sort of listening istenership you guys, let’s oll to the main interview, and I’d catch you in the outro.

Jaz’s Outro: So thank you so much for listening all the way to the end guys. That was Dr. Betty Robin from the density rising podcast, please do check it out. If you’d like Betty’s dial, she is very much like a her episodes are non clinical. So I think there’s something beautiful about that as well. And you have to respect her her journey and her sort of desire to make massive change in life and leave dentistry. So that has to be respected. And I think it’s great what she’s achieved as an attorney, and also now looking at practice acquisitions. So I’ll catch you in the next episode, same time, same place.