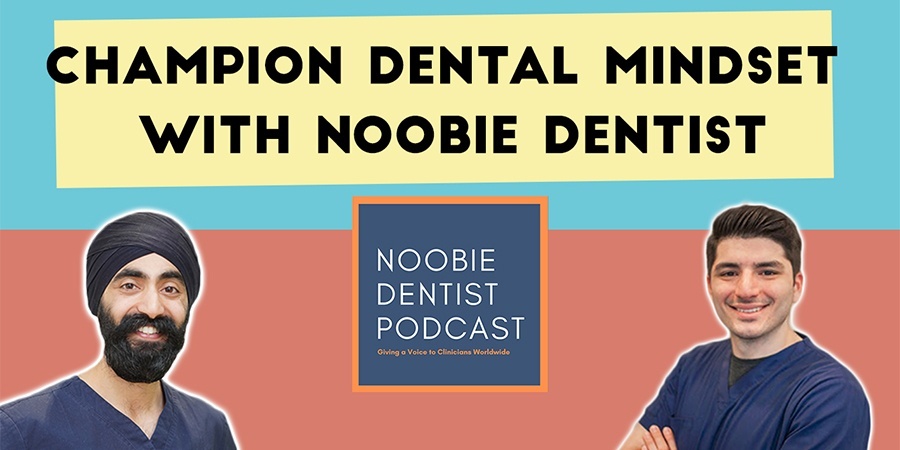 It’s my sister’s wedding but the Protrusive team managed to get this out for you – and boy it is a good one! Dr Omid Azami AKA The Noobie Dentist will inspire to you adopt a growth Mindset.

“Have that mindset like ‘it’s a journey’, you’re never ‘there’ necessarily. You can always get better, and do more.” – Dr. Omid Azami

Here with me, Dr. Omid Azami, host of Noobie Dentist Podcast, who inspires and gives voices to clinicians all over the world and inspiring Dentists. In this Interference Cast, we discuss all about:

If you want to learn more, please do subscribe at  Dr. Omid Azami’s Noobie Dentist Podcast

If you liked this episode, you will definitely love and will learn a lot from the episode 10 Habits of Highly Successful (and Most Valued) Dentists

Opening Snippet: As an example early on i was all about the money right? I was, you know, in toronto I was a new grad I was like I want to make you know x amount of dollars per year and day to day like my happiness was like up and down on how much production I had and how much I was making and it was pretty early on I was like man this is not a good way to like think about dentistry of just like how much money am I making. Let's instead focus on my clinical outcomes like is my restoration is looking better today? Is my marginal contours better? Is my contacts better? Is my extractions faster and cleaner? Is my post-op comforts? So that's I had that mind you know mindset change and it really made me happier because I was challenging myself to you know learn the craft better day to day instead of just focusing on the money and the outcome side of it...

Jaz’s Introduction: Hello, Protruserati. I’m Jaz Gulati. Welcome to this interference cast with Omid Azami better known as the host of the Noobie Dentist podcast. This episode was actually shot many months ago. Right now when i’m recording this introduction I’m quite nasal. I’m so sorry. I have got a bit of a non-covid bug. It’s a bad timing but at least it’s non-covid. I’ve got that confirmed. It’s my sister’s wedding at the moment and for those of you who are familiar with Indian weddings It’s not like a one-day affair, I wish it was a one-day affair. This is like a three-week bonanza I am so grateful I have just one sibling but anyway let’s make the most of it. I’ve got my son. I’ve got good food to look forward to. Dancing. Indian colors and festivities and traditions. So I’ve got a lot of that going on. I’ve got a lot of the episodes on autopilot that have been pre-recorded So they’ll be getting released by the team over the next few weeks. So you won’t go a week without having a Protrusive dental podcast episode, don’t worry. This themes, the themes that we cover in this episode are very much related and intertwines some of the previous themes that we’d cover The theme of journey. The theme of career decisions. The theme of mindset and the theme of just being the best version of you. The two biggest takeaways that you might get from this episode is funnily enough something I like to call toilet university and yes I have no shame and number two is something that only describes later in the episode as the social multiplier effect and something that’s so relevant in dentistry. So i hope you enjoyed me and Omid just you know have vibing out chatting about dentistry in Australia. Dentistry in UK and how to power up your mindset in dentistry. I hope you enjoyed this one.

Jaz’s Outro: I hope you enjoyed that little session with Omid do dm us both on instagram. Let us know what you thought of this episode and i will catch you in the next one no doubt. Make sure you stay up to date with everything by signing up to the newsletter which is on protrusive.co.uk. Any sort of blog post or episode that you click into a pop-up will come up. You can put your email address there. There’s loads of infographics download and also of course our famous telegram group which is protrusive.co.uk/telegram and our facebook group which is the Proclusive Dental community. I will catch you very soon guys in the next episode.