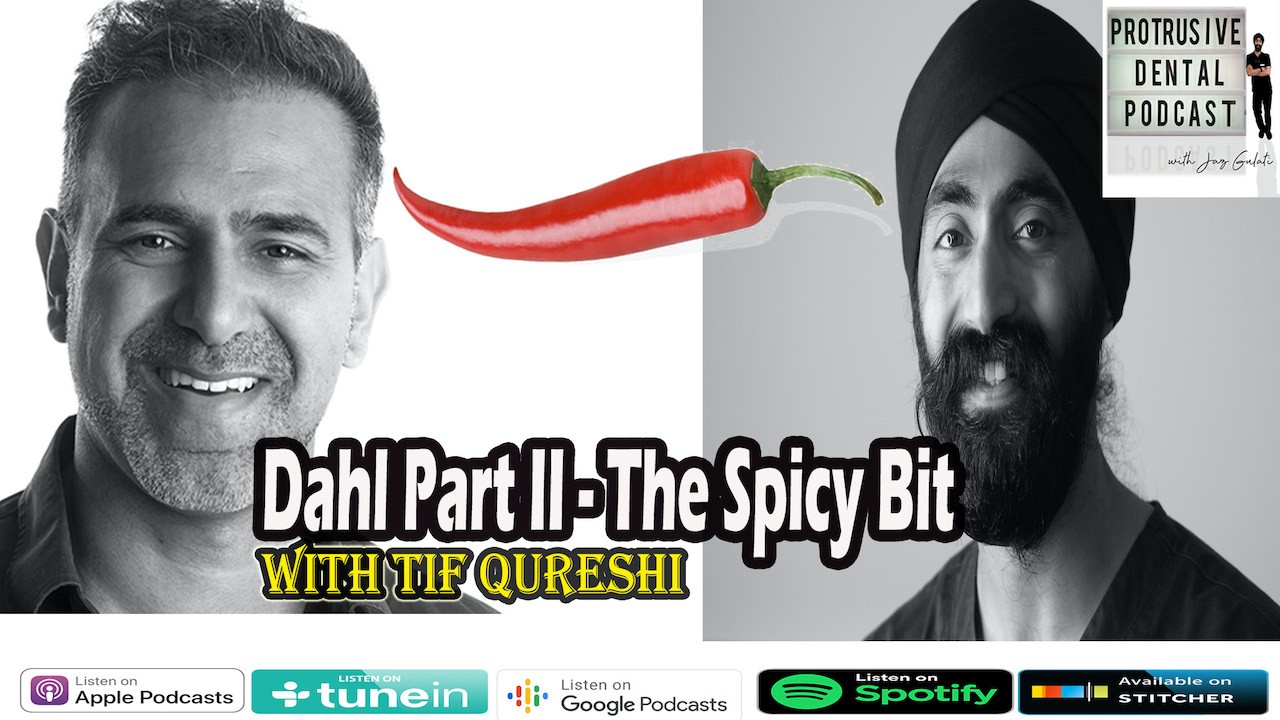 Dr Tif Qureshi is back for Dahl Part 2!

We build on that awesome first episode (Episode 16) and discuss:

On the show, I promised Tif I would share a full protocol case with him – you can see this on my Protrusive Facebook page here.

A £30 composite heater! This mug warmer looks really posh and can be used to heat composite and local anaesthetic.

Opening Snippet: I actually seen quite a few cases have been posted online on one or two articles written, you know, people have said Oh, it's not sure if it's gonna. Actually, it's not gonna work. And the way I view it is if someone's got an in standing premotor and they need a dahl, because why not just have you know, a few mouths or a couple mouths of ortho, you know, it's not a rocket science to move that tooth, that's the point if you've got a little bit of, you know, dahl is effectively like doing some ortho. It's like doing some ortho but we're talking about biplane...

Main Interview: [Tif] And this is gonna be one of the questions that we were sort of thinking about here was, Why do people not appreciate it and one of the biggest problems is I think a lot of people use dahl on the wrong patients when it’s too late. And dahl is really for patients that you’ve had a relationship with you, they understand what’s going on. And you actually say to imagine to brand new patient who’s got a bit of wear on the anterior teeth. Imagine trying to say to them, right? “I need to build your anterior teeth out to improve your anterior guidance and disclude your posterior teeth blah, blah, blah.” This guy talking about

Jaz’s Outro: So there we have it, folks. As a dental geek, I absolutely loved having Tif Qureshi on the show. I hope you gained a lot from this two episodes. That case that I mentioned to Tif, the one that I would tag him in it of me using the FOS appliance and my dahl protocol. I did actually post that on Facebook with about 60 photos step by step. I’m a huge fan of doing step by step photos because you know I’ve done it before, obviously, but I don’t like the whole thing. Here’s a before and after, look how awesome I am. I like to teach and share. And I’m open to getting criticized and scrutinized, I feel like if someone can criticize me and scrutinize me, I will gain, I’ll become a better dentist from it. So I actually posted my entire protocol of a dahl case on my Facebook. So the way you can easily access it instead of me giving you a long sort of URL is you just go to www.jaz.dental/dahl as D-A-H-L, then it will redirect you to my Facebook page to the album that has all the 60 photos. Let me know what you think. And you’ll see that the FOS appliance and action which has just been fantastic for my dahl cases. And if you want to learn more about this type of splint, there is a hands on course happening in February. If you want more information, please message me. I mean, it’s me who’s teaching on it, but it’s mostly being marketed internally to the people who use this lab. But there might be a few places available. And if you’re interested in that Chim near Reading up anyway, so please message me if you’re interested in that, you know, hit me up on Instagram. So thank you so much for listening all the way to the end, and I’m really looking forward to next one. Thanks so much.