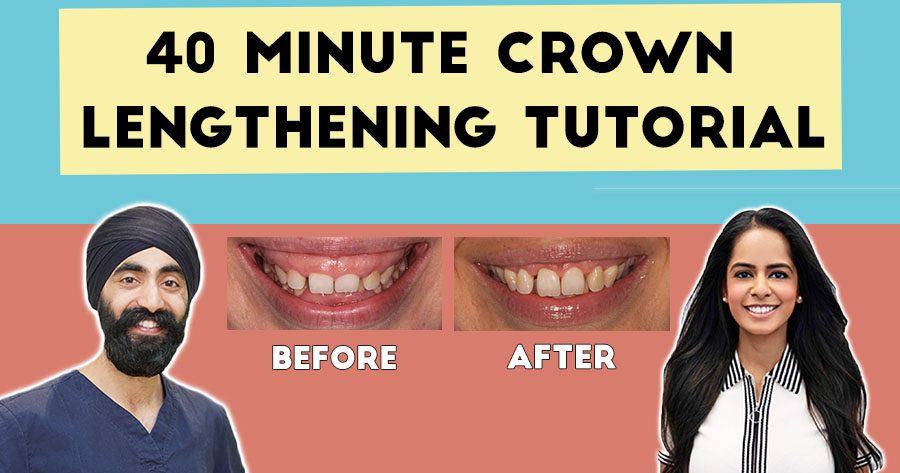 Does Biological Width, apparently now known as ‘Supra-crestal tissue attachment’ confuse you? Or would you like an introduction or a refresher on the clinical stages of Crown Lengthening? Fear not, I twisted specialist Periodontist Reena Wadia’s arm and finally got her on the show to teach us!

“Don’t complicate things, if something works in your hands and you’re doing it well, keep things simple, don’t have too many variations because then it just starts getting unpredictable. So test everything out, go on courses, and then see what works in your hand and then stick with that.” – Dr. Reena Wadia

Check out Reena’s Crown Lengthening Live course on a Sunday in London!

If you liked this episode, you might also enjoy How to Save ‘Hopeless’ Teeth with the Surgical Extrusion Technique

Opening Snippet: Yes and then you suture. so there's different types of suture. I have to just say whatever works in your hands. I use vicryl usually five or six. So but you know whatever works in your hands or whatever technique you can even just do simple interrupted. It's just got to be good suturing and get the soft tissue in the correct place. Mattress sutures are good as well. And then if you need to put a dressing on, if it's restorative probably might wanna use some COE-PAK...

Jaz’s Introduction: When you start taking on more complex restorative cases or you start doing smile design cases. These kind of cases you tend to appreciate that there are two other types of disciplines or too hard skills that really benefit a lot of these patients. Number one is orthodontics like a lot of my restorative patients, they will really benefit from pre restorative orthodontics and that makes sense. okay? with ortho you can actually intrude teeth get the gingival levels even you can actually make your dentistry less invasive, less prep by getting the teeth in the right position. But the second one is actually soft tissue related. more and more and more to get the gum lines Even or what we call aesthetic crown lengthening, there is a huge role in the Perio. So this episode is focusing on that THIS with Reena Wadia. Reena Wadia is someone who has really inspired me so many years and when I was a dent student, she qualified and she’s always been a mentor to me. In fact I’ve mentioned Reena’s name in the previous episodes as you know what Reena taught me this or Reena taught me that. So she’s such a great giving clinician, she’s a specialist periodontist. I know you will love her and today’s episode is talking about just crown lengthening surgery where it comes to aesthetic crown lengthening. IE doing some sort of surgery to make the gum lines or gingival zeniths more even and presentable or functional crown lengthening. This is when you’re actually doing crown lengthening to allow you to get more of a Ferrule so you can actually restore a tooth. we’re gonna talk differences how to plan for each one. What’s a post op advice to give and many more gems. the Protrusive Dental pearl i have for you is how to find out what kind of bio type you’re dealing with. And the classic way to do is use a ball ended perio probe and use the perio probe has like a black ball, right? So it’s like a black painted ball, and then you put it inside the sulcus. Okay? And if you can see the black or the probe shining through the gingiva then you know, you’ve got someone with a thin bio type and you write your notes, okay, diagnosis, thin bio type, If you can’t see the probe or if you can’t see the ball end, then that is a thick bio type and and that’s a good little technique that I learned, which is very relevant to this episode. We’ll also be talking a bit later this episode about how to do bone sounding, okay, what is bone sounding and how to do it and how it’s relevant to your planning for crown lengthening surgery. So if you don’t know what your altered passive eruption is to your alter active eruption, then this episode will sort you right OUT. Let’s join Reena now, the main podcast and I’ll catch you in the outro.

Jaz’s Outro: Well there we are, Protruserati. I hope you enjoyed that episode with reena All about crown lengthening. I hope you’re now able to assess your patients better and look at them with a different lens in terms of when you see someone with short clinical crowns got small teeth. Well is it really that they have small teeth or is it that their gum never matured? Okay, so it’s a different way to look at someone. And then from there, when you make that diagnosis, some patients may actually desire, once you communicate the value of it to them, an aesthetic improvement in terms of crown lengthening or you may plan some functional crown lengthening to help improve your restorative prognosis. So I hope you enjoyed that very much. Catch you in the next episode. As usual, please do check us out on instagram and of course our telegram, Our special little family on telegram. It’s protrusive.co.uk/telegram to join our telegram group. protruserati only. i’ll catch you in the next episode. Same time, same place.