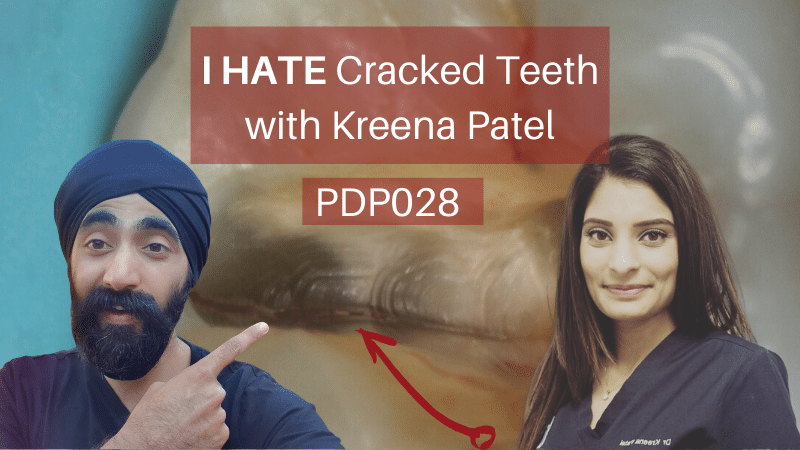 CRACKS = DIFFICULT CONVERSATIONS with our patients.

Protrusive Dental Pearl: When checking for cracked cusp syndrome using a tooth slooth, make sure to jiggle it a little bit because it can help to get a more accurate result!

I am joined by Endo Queen Dr. Kreena Patel – @kreenaspecialistendodontics to discuss all things cracks to make our decision making process clearer in General Practice!

And right at the start we touch on:

Opening Snippet: Hello guys and welcome to another episode of the Protrusive Dental podcast...

Jaz’s Introduction: Today I’ve got endo Queen, Kreena Patel on the show today and we’re talking all about cracked teeth, something as you will hear, I absolutely despise in general practice, I think it’s the bane of my existence. It’s one of the most difficult things to sort of diagnose sometimes. And the amount of conversation that’s involved with the patient, the amount of sort of discussion and complexities and nuances and possibilities your tooth might not be able to, might not even be able to save your tooth, we might have to put a crown on. But if then it fails, you might end up have to remove it. You may or may not be better off having an implant, the success isn’t that good. I’m not even sure which tooth it is. These are sort of things that you sort of end up discussing when it comes to cracked teeth. So we’re going to be discussing things like how far into a canal orifice does a crack need to extend before you look and say, You know what, this is unrestorable and when discuss about diagnosis of cracked tooth, which is one most challenging aspects of cracked teeth. And we’ll also discuss about how Kreena suggests is managed endodontically and also buy us in terms of cuspal coverage. So I hope you enjoy the episode. The episode as well as everything from Episode 20 onwards is going to be eventually on Dentinal Tubules for enhanced CPD, so thank you Dentinal Tubules for quality assuring my CPD. So if you wanted to get your CPD hours in, then you can go to Dentinal Tubules search Protrusive Dental podcast and answer a few questions, acknowledged the aims objectives and they are you will have CPD, enhanced CPD for this meeting. We know with all the outcomes written there. It’s all well and proper. So the Protrusive Dental Pearl I have for you is an endodontic one. And it’s the one that actually Kreena gave me in the middle of the episode actually, she told me when we’re using a tooth slooth, which is one of those rigid plastic thingies that you put on the teeth, and you get the patient to bite together and what it does is it flexes the tooth to then see if you are confirming the diagnosis of cracked tooth basically is essentially how you do it. And Kreena talks a little bit more about that. When you’re using that one thing that I don’t do as much at the moment I had an occasion I found Oh yes, this helps. But I never really made it protocol was to actually once you get the patient to bite down on the tooth slooth, you jiggle it a little bit, just jiggle it because that sort of jiggling can then sometimes be the difference between being a negative result and a positive result. And that positive result is obviously important in your diagnosis. So the Protrusive Dental pearl donated by Kreena Patel is when you’re using a tooth slooth, make sure you jiggle it. So I hope you enjoy the episode. If you’re listening to it, then awesome. If you’re watching on YouTube, then even better because there’s at one stage a photo of a cracked tooth that I show. So if you are listening, then reference back to the video version on YouTube and igtv to look and assess that clinical photo of a crack that I will show because it’s an interesting point that she raises about the width of the crack. So sometimes it’s helpful to see the crack. So let’s all learn from Kreena.

Jaz’s Outro: So thanks again for listening all the way to the end. And within a couple of weeks, I imagine you can go on to Dentinal Tubules and answer the questions and get your enhanced CPD for that. Gosh, I hope by the time this episode’s out that lockdown is finished with some recording in the midst of lockdown. So I hope everyone is safe and well and their families are all good. And we’re going to hit back into practice with all guns blazing. And as always, thanks so much for listening. If you like the content, please subscribe, like and share with your Dental colleagues. And please, of course, leave me a five star rating on your podcast platform. That’s how my podcast actually grows. So please, that’s very important. I really appreciate it.