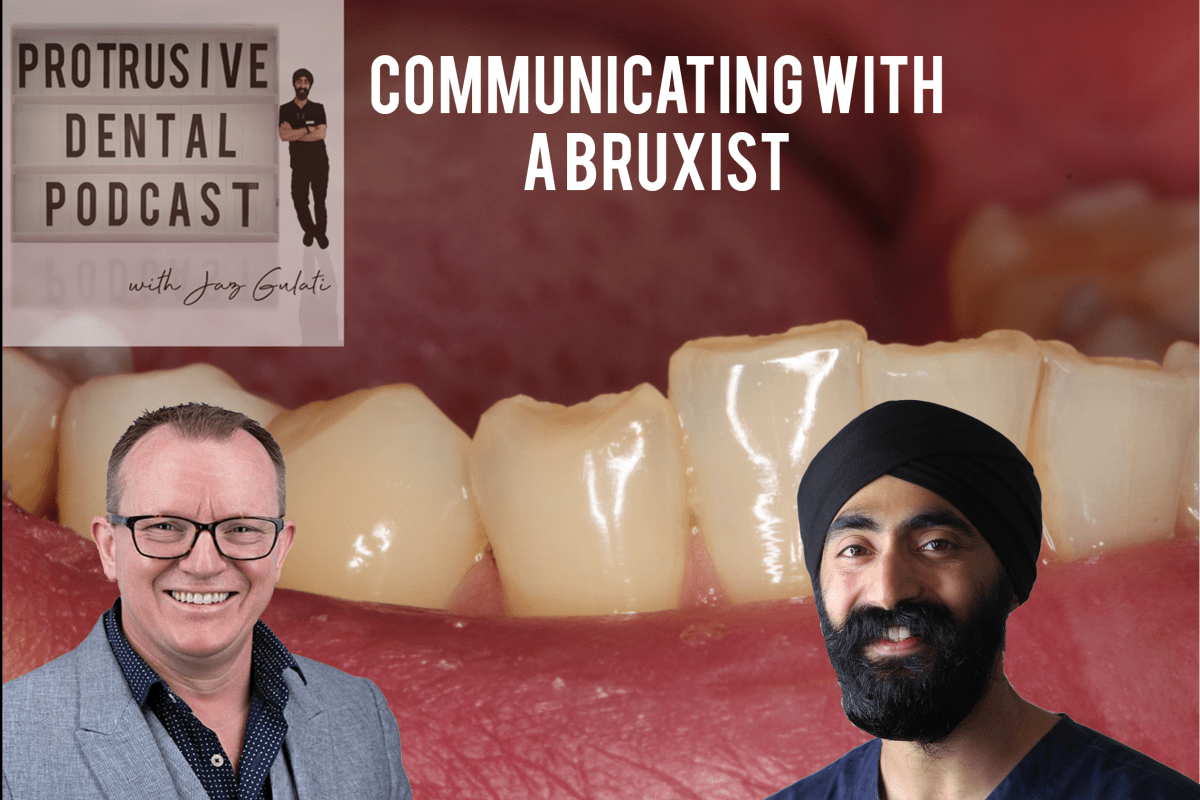 Communicating with a Bruxist – PDP011

Have you ever encountered the patient with all the signs of bruxism/parafunction, yet they deny this passionately? I see this daily. Patients are in denial that they parafunction – how can we communicate better with these patients?

I am joined on this Protrusive Dental Podcast episode by Dr Barry Oulton to help us communicate better with bruxers!

In this episode, which has a brilliant Protrusive Dental Pearl about ‘colouring in your dental splints’, we discuss:

Dr Barry Oulton owned Haslemere Dental Centre in Surrey for 20 years, turning it into an award-winning practice with a reputation for outstanding customer service before joining the Portman Dental Care Group in 2018.  In 2017, he founded The Confident Dentist Academy to help dental professionals learn effective communication skills and sell with integrity so they can have more impact and make a bigger difference, both professionally and personally.

His 2 day course ‘Influencing Smiles’ course teaches Dentists and their teams how to communicate and sell  that translates into happy patients, a great working environment and, ultimately, sees profit increase.  He also offer in-house training programming and coaching for practices and dental companies and also online training products.

He is on the editorial board for The Probe and lectures for companies such as Septodont, Cerezen, S4S, Practice Plan, Henry Schein and Wisdom Toothbrushes.

Take a look at his muscle exam video which is currently on www.theconfidentdentist.com/s4s which is very helpful demonstration of how to carry out a dentally relevant muscle examination.

Jaz’s Introduction: Hello, everyone, and thank you for joining me today. I’m Jaz Gulanti. And this is the protrusive Dental podcast episode 11. I’m joined today by Barry Oulton really excited to have him on because he is someone who lectures all over the country about communicating with patients. And he also lectures about parafunction and parafunction control. So what I decided to do and the reason I approached him was to marry these two together about an episode about how to communicate with Bruxists. It’s a huge topic is something that’s probably born out of frustration, my earlier years when I used to speak to patients and the signs of parafunction are obvious to me at one stage they weren’t when I learned what I was looking for. And we’ll discuss that in this episode, it becomes obvious, you know, patients that exhibit signs of parafunction. When you speak to these patients, invariably, they actually deny the fact that their parafunction, I don’t know, I don’t grind my teeth. And there’s a there’s a way you can approach this so that they can actually take accountability for their parafunction, because ultimately, that has a huge bearing on the longevity, our restorations and their pain levels and whatnot. So I’ve got a great episode with Barry Oulton today, there is a Protrusive Dental pearl within the episode. So I hope you enjoy it. You can listen to it on Spotify, Apple podcast, Google podcasts, Stitcher, wherever you usually listen to it. So thanks so much for joining me. And I hope you enjoy Barry Oulton.

Main Interview:
[Jaz] Let’s just start Barry, thanks so much for joining me on the Protrusive Dental podcast. I was just having speaking to you earlier about how happy I am that I’ve got you to speak on this topic because I think you marry communication and topic of paraunction, occlusion, all that sort of stuff really well. So for those few people who probably don’t know who you are, can you please tell us a little bit about yourself?

Jaz’s Outro: Thank you very much for listening right to the end. That was Barry Oulton, thanks so much for coming on. I realized Barry is the first time actually spoke to them over voice if you like and I really liked him so I booked on to his course in December in London. So if you’re coming to the December course London please do say hello. As always if you’ve enjoyed the content, go on my Facebook page Protrusive Dental podcast Like it, share it. Subscribe on my website, jaz.dental for episode updates and blog posts and whatnot. And thanks again and the next episode is with the implant ninja. Someone called implant ninja find out who he is, what he’s about. He’s got great Instagram profile. And I was asking him about occlusion relevant to implants and also how to get a good work life balance. So it’s a really special episode actually. So I look forward to joining for Episode 12 out in a few weeks. Thanks so much. Bye!