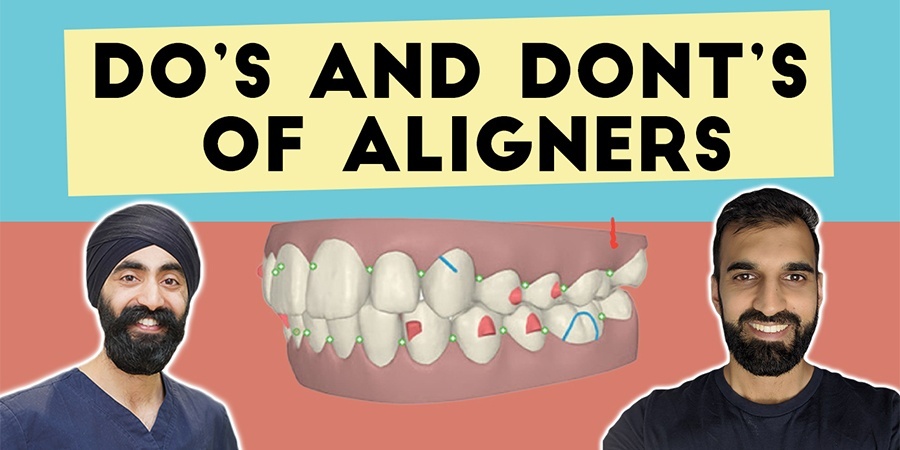 We wrap up STRAIGHTPRIL with a HUGE one – what makes aligners predictable? How can we make aligner treatment protocols efficient starting right from the planning stages and the Clincheck. I am joined by a fellow podcaster and specialist Orthodontist Dr Farooq Ahmed who is a wizard with Aligners!

Protrusive Dental Pearl: Use floss to create loops and use a chain retainer, like Ortho-Flextech which has made it much easier in my hands!

Do check out Farooq on Ortho in Summary Podcast!

If you liked this episode, you should check out IPR for Dummies with Dr Devaki!

Opening Snippet: So that was the premise of the question, we have to know what is predictable in orthodontics, right? So if we can put aligners to the side for a couple of minutes, it's the fact what can we do put it to be with fixed appliances with other types of appliances. And the truth is, there's nothing which is 100% predictable. So we've got to start off with a golden truth that is not 100% predictable as a science...

Jaz’s Introduction: Like with all things in dentistry, case selection is so so important and we all know that orthodontics, including aligners has a very steep learning curve. That’s why in this episode, I brought Dr. Farooq Ahmed to talk all about the do’s and don’ts of aligner treatment. I mean, I wish I had something like this when I was starting align treatment because it helps you to get more efficient treatment. I mean, I made a few mistakes, nothing serious, but it gives you that magic word which is predictability. That’s what we want in all our treatments. And in particular with aligners. Hello, Protruserati, I’m Jaz Gulati and welcome to this final episode of STRAIGHTPRIL. I hope you found this month interesting and stimulating and it’s going to help you with your future orthodontic cases, I want to also take this opportunity to apologize to you for not emailing you guys like usually I did my newsletter full of the episode, I started off by doing a per episode. So now I do like a roundup of some of the bigger episodes. So maybe I’ll do one for straightpril, all the orthodontic series in one email. But emailing has been very difficult for me because I’ve moved house, it’s officially happened. It’s been a roller coaster, I’m sure any of you who have moved before will be able to relate with me. It’s been funny, you know, I moved back from Singapore, back to the UK in 2017. I lived with my parents, it was nice living in a very traditional Indian household. During the pandemic, it was brilliant to have six of us including my son living in the same household. I think as a bubble during the pandemic that was really special. I think I’ll cherish those memories for the rest of my life. But I think it’s time to now flee the nest. So we have our own space now. And it comes with its own challenges of childcare before I just, you know, give a shout out to my parents and have some more free time to do this kind of stuff, but I don’t have as much time anymore. But that’s fine. You know, that’s the beauty of being a father beauty of having a family and everything just has to fit around that right so before we join the main episode, we’re gonna look at the main things that make aligner treatment predictable, which kind of movements are favorable, which ones are unpredictable, and how to program your clincheck to overcome that now before we get to that with Farooq Ahmed, I’m going to share the Protrusive Dental pearl which is a retention one following on for that awesome episode with Dr. Angela Auluck episode 069 do check it out if you haven’t listened that already, is regarding fixed retainers. Now. Angela talked about placing an indirect labmade fixed retainer. But sometimes I like to place a direct one. And what I didn’t like and I didn’t enjoy the outcomes was using the sort of braided wire that you have to sort of bend yourself and apply to teeth. I could never get that perfect adaptation. So maybe it’s my hand skills or whatever. But I felt as though there should be something better out there for GDPs or orthodontists who want to do direct fix retention and do it really well and more predictably. So what I found I learned through Mohammed Al Muzian is using the ortho flextech chain retainer. Now this is a chain retainer. So it just has this wonderful contour to the lingual surfaces of the teeth. And what I do is I get my nurse to what I put the floss between the lateral and the canine let’s talk lower, and we make a little loop through the loop goes through retainer on each side. So left and right. And so the nurse pulls it not too tight just gently so that the wire retainer adapts nicely. So if you’re watching this on YouTube or Dentinal Tubules or wherever you can actually see the video of me actually doing this. But if you’re listening just imagine the loop floss, the retainer going through it the nurse just gently pulls it so now you have this lovely chain retainer adapted very nicely on the lingual. That retainer has just made things really easier for me when it comes to doing direct fixed retention and placement is better nicer. I overall really enjoy it. So do check out the flextech, ortho flextech chain retainer. I’ll put some links on the protrusive.co.uk website so you can check it out. Also on the Protrusive Dental community Facebook group if you’re not on there, why aren’t you on there? Anyway, hope you will enjoy this episode with Farooq. I’ll catch you in the outro.

Jaz’s Outro: Hope you enjoyed that episode. Thank you for listening all the way to the end. I think Farooq is such a humble specialist, I mean, I love people like him who you know, he’s practicing a really high level like he’s a consultant. He does so much for the profession and education. He’s so down to earth and he’s so with it with a GDP so Farooq man, keep doing what you’re doing. We love it. Thank you so much for helping us gdps and also helping the profession of orthodontics. I think you’re really you’re advancing orthodontics, man, you’re spreading knowledge, you’re helping them run out. So I respect that massively. So from the next episode, we’re no longer in straightpril mode and the next episode I have for you is productivity with a prosthodontist with my good friend Ricky Bhopal. I hope you enjoy it and I’ll catch you then.