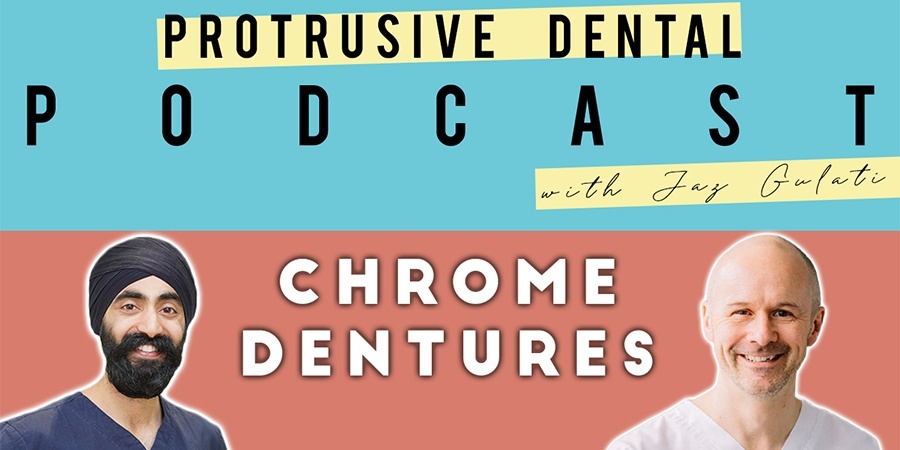 Finlay Sutton has made Dentures sexy again. His teaching style is world-famous and it was an absolute thrill to chat to him. Protruserati – this one is going to be clinically IMPACTFUL.

We started by discussing the benefits of using Loom for video communication with patients and lab – it adds a personal touch. Genius!

What do you do when the framework does not fit?!
Finlay will firstly trial the denture on the model. If in doubt, rehearse the path of insertion several times and you can ask your lab.
You can use occlude spray on the denture fit surface

Leave your patients in immediate denture (plus relines) for 9-12 months to get maximum shrinkage before upgrading to Chrome. Sometimes you move quicker but need to reline (use ZOE) and then alginate pick up 12 months later.

Should you use high impact acrylic? It seems a sensible idea!
How about metal mesh?

Why Finlay has moved away from precision attachments and true ‘milled’ crowns as they are maintenance heavy. It is simpler to have crowns that are shaped appropriately with guide surfaces that will improve the denture.

He does use Stud Attachments, which he uses just twice a year, to resurrect a root-filled retained root to negate the need for a clasp in a high smile line patient. Tell the patient the root may split, AND the tooth in front will need a clasp in the future. Metal backings are amazing for bracing – ‘My dentures are like removable resin bonded bridges’. Hidden away but provide great resistance to rotation and adds rigidity and bracing.

Another gem was the use of dimples in to the crowns palatally and distal guide surfaces – with metal backings. The metal backing would have small balls that would slot in to the dimples.

‘What I hate is patients coming back with problems after they spent lots of money. If it all fell apart in a few years time, which these do, we’re in dickie’s meadow’ – there we are, keep it simple!

You can use Zirconia crowns with rest seats and dimples but ensure, smooth, round, organic shapes. Be careful about making upper palatal too bulky as affects speech – hence why preferences to make these dimples substractive.

If you want to learn more from Finlay, do check out his website for denture courses and learning resources.

If you enjoyed this, you may also like the episode about Complete Dentures with Mark Bishop!

Opening Snippet:Welcome Protruserati to Episode 56 with Finley Sutton. Now, we've all had these situations with dentures before, right? You're trying to fit the framework which has just come back from the lab and it doesn't fit. And you have this heart sink moment like oh my god, like, what do I do now? Right? So if you're ever in that situation and you want to know how to fix it, Finlay Sutton, who is a phenomenal dental educator, will answer this question on this podcast for you, as well as so many others, like what do you do in a deep bite And there's no space for the chrome? Or how about milled crowns? And how to incorporate that with your Chrome dentures workflow. So stick with this episode to learn all about that with Finlay Sutton...

Jaz’s Outro: Thank you so much for listening and watching all the way to the end. If you’d like that hits the subscribe button on YouTube. If you’re watching on YouTube or dentinal tubules. If you’re listening on Apple, please do, think about leaving a review. I’d really appreciate that. That’s how the podcast grows. And I look forward to catching in the next one. The next one’s a little bit of an interference cast and it’s about the six or seven signs haven’t quite decided yet that you are a comprehensive dentist. Thanks so much Protruserati for joining me once again.