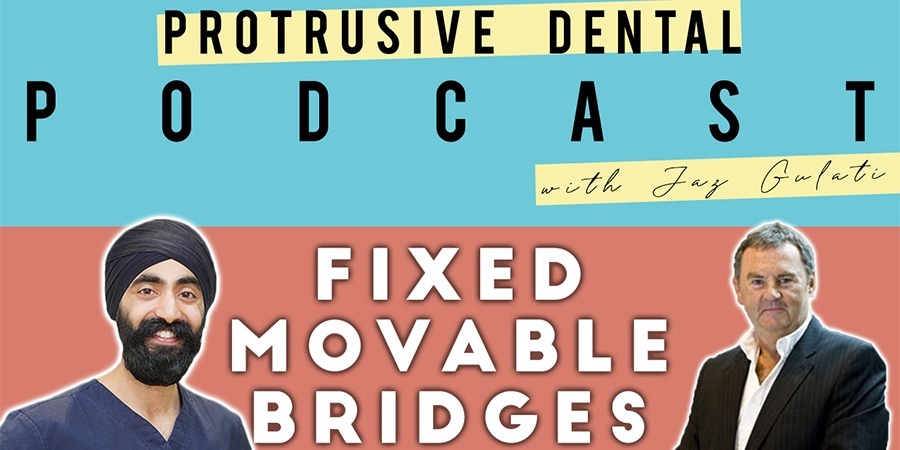 Get ready for the best summary of bridges you ever heard, including diving deep in to this mystical design of bridgework called ‘fixed-movable’ bridge.

You cannot search about Bridge Design on Google without landing on the great content that Prof Paul Tipton has released.

Protrusive Dental Pearl: where to place your grooves for crowns and bridges?
Crowns: place grooves mesial or distal, or mesial AND distal. Ideally in tooth and not in core material (we elaborate in the episode). Why mesial and distal for crowns and bridges? The forces will be transmitted bucco-lingually on a crown – therefore grooves perpendicular to this force vector to resist it would be mesial/distal.

How about for bridges then?

For conventional bridges the grooves are placed buccal or lingual, or buccal AND lingual.

Prof Tipton and I discuss:

If you enjoyed this episode, you will like the complete denture tips given by Dr Mark Bishop – check it out!

To learn more about Tipton Training, check out their website for courses.

Opening Snippet: For me, this is 100%. Okay? I know we should never say 100% in dentistry for 99% that the fixed movable attachment is always on the distal aspects of the anterior retainer...

Jaz’s Introduction: Hello everyone and welcome to another episode this time with Professor Paul Tipton. Listen, if you’ve ever been a student, or in your foundation year, and you want to find out more about fixed prosthodontics, you turned to Google and you start searching about bridges. You can’t get very far on Google without coming across Paul Tipton’s papers. In this episode by the way is absolutely full of bridge work gems, which I think are so helpful. So we’re going to talk about all things fixed movable bridges, the common mistake areas that dentists make when it comes to bridge work and bridge design. We also talk about grooves, so my Protrusive Dental pearl for you is when you’re placing grooves for crowns, placed them mesial and distal. When you’re placing grooves for bridges, placed them buccal and lingual or buccal or lingual. Same with the mesial distal is mesial or distal or mesial and distal. And so does that make sense? We go into in more depth. So to find out exactly why those rules exist, then you have to listen all the way to the end of the episode. Because towards the end of the episode, we discuss all that. But there’s so many gems in them. The meat and potatoes of the episode is basically about fixed movable bridge work, the nuances of it, when to choose it, what are the contraindications to fixed movable bridge work? It’s actually interesting actually that fixed movable bridge work is their default design. Prof. Paul Tipton says actually you shouldn’t be finding reasons not to do it and and therefore settle for fixed fix. Whereas in dental school we don’t really get taught or certainly in my experiences that we didn’t really get taught that much. And I never placed a fixed movable at Dental School. So I hope you find this episode useful. And I’ll join you in the outro.

Jaz’s Outro: So there we have it loads and loads of bridgework gems as I promised. I hope you found that useful. I’ve had so many superstars on recently honestly, I’ve been quite blessed. So yeah, as always, thanks for listening all the way to the end. I really appreciate it and I’ll join you in the next episode.