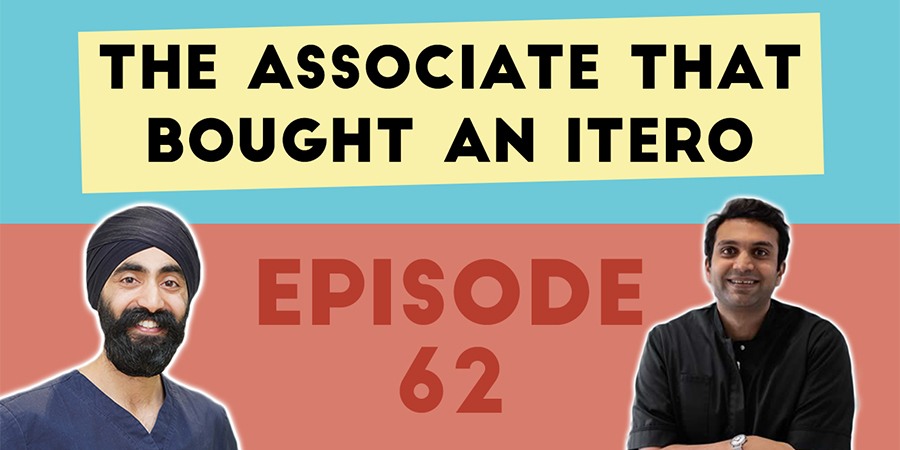 Sometimes associates moan that they can’t improve their Dentistry or provide better outcomes because their principal/corporate will not buy them that fancy composite/instrument/air abrasion unit/orange floss (okay maybe not the last one!). Here’s a tip: buy it yourself!

I’m not saying you should go crazy and buy ALL your materials – thats the role of the practice – but if after having a good conversation with your principal about investing in the new gear and it is not bought for you….there are some major advantages of buying it yourself.

In this episode I am joined by Dr Rosh Panju who, as an associate, bought his own intra-oral scanner (iTero) – that speaks volumes about his mindset.

In a nutshell, this episode is about making your own luck.

For those asking about where to buy the ‘associate box’ to transport kit between practices, here it is:

If you enjoyed this episode, you will like the episode on Emotional Intelligence with Richard Porter – check it out!

Opening Snippet: But you okay went out and you bought your own Itero right? So i just want to let that sink in guys okay and i'm not saying that you know for you to show off in any way, Rosh, nothing like that okay? I just really value your mindset.

Jaz’s Introduction: Welcome, Protruserati to episode 62 of the Protrusive Dental Podcast. In this episode we’re going to explore some very big themes about as an associate, how can you make yourself indispensable to practice and what we can learn from Dr Rosh Panju, who is a friend of mine, who is known for many reasons, good reasons but he bought an itero scanner. Now these things aren’t cheap. So what is…what goes inside the mindset of some of an associate who goes out to buy his scanner versus the associate who refuses to even buy a flowable composite for example and the associates that are missing out on using the best techniques for their patients just because my principal won’t buy this for me and therefore they’re not living up to their true potential. They’re perhaps not doing the dentistry to the level they want to be and they’re blaming it on the materials that they don’t have because of the principal that won’t buy it for them but then guess what, sometimes you have to make your own luck. So part of the Protrusive Dental Pearl i want to give you is A) make yourself indispensable to your dental team if you’re an associate listen to this, how are you indispensable to your team? Do you help out with team training? Do you boost team morale? Are you really helpful in collecting reviews for your practice? Because nowadays we can’t be leeches but it works the same way as a principal, are you providing value for your associate? So I think there should be a this synergetic relationship between an associated principal and we’re going to cover some of those themes today in this episode. The second Protrusive Dental Pearl, oh my goodness you’re getting two.. is when i used to work between three different practices i found it really difficult, a real challenge to transport my camera, transport my loops, transport all the composite and stuff that i actually bought a lot of instruments over the years. How do i transport that around? So i’m going to show you one way that i did it it was like using this like this big black parrot box. It wasn’t actually parrot brand but i’m gonna show you an example, there’ll probably be a video now playing in the background as i’m speaking here but essentially it’s a big box that you could buy heavy duty and you get these like cut out foam areas that you just have to sit down one day and do the hard work and design the measurements yourself. So that you can slot your camera in perfectly because what you don’t want to do as an associate is have to dismantle your camera every time you’re moving from one practice the next practice and then reassemble the lens and the body and the flash every time you join a practice or have a barrier to taking photos or in the middle of treating a patient be like oh just one moment i have to go grab something and go find and troll through your bag to find that thing that you use between practices, it’s just not going to work. So this is something that i bought some time ago. It’s been useful to me to transport between surgeries my equipment so i’m passing that on to you as an example. So i hope that helps some of you associates who are working between practices and thinking oh my goodness how can i transfer my equipment from practice to practice. So let’s join let’s give our ears to Dr Rosh Pan or if you’re watching this on youtube or Dentinal tubules welcome and i hope you enjoy this episode.

Jaz’s Outro: Well there we have it, Rosh Panju, everyone thank you so much for joining me on this podcast it was really fun to record. He’s just a down to earth guy and i think he’s exemplary associate not just because he bought all that you know scanner and stuff you just listen to him and you think that he has something to give, he has some value to give to his practice that he works in and he cares for his staff he cares for his principal. So this is how we think we should model ourselves, be like Rosh. Thank you so much for listening all the way to the end. Check out the next episode with physiotherapist Krina Panchal, where we discuss tmj physio this will absolutely make a massive difference to your patient base if you’re seeing patients with tmd and of course if you haven’t already signed up for the launch offer for the splint course which i’m so excited to release. It’s taken years of hard work to actually put something together that covers everything from diagnosis to examination to which splint when which is the biggest most confusing thing that we have as dentists, how to know which splint is the most appropriate one for your patient. I broke it down made a system out of it which i am so proud of now so check it out on splintcourse.com sign up for the update. When it launches i will let you know.

Episode 75
The Associate that Bought an iTero (How to Make your Own Luck) – PDP062
Loading Comments...