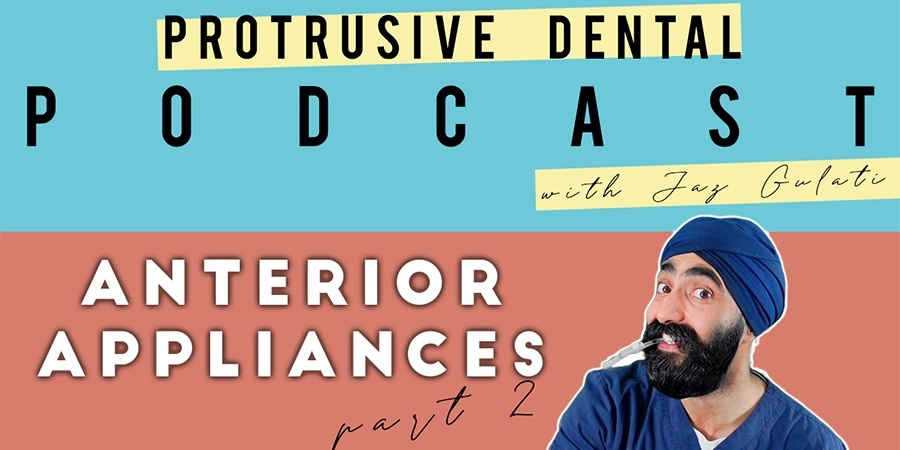 In this long overdue (sorry, Protruserati!) episode I will go deeper in to Anterior Midpoint Stop Appliances as an occlusal splint for bruxism, myofascial pain and headaches. If you have not already, you must absolutely check out Understanding AMPSA Part 1 as this is the sequel!

Protrusive Dental Pearl 55: Remember at Dental School where they taught us that 3 fingers worth of mouth opening is considered ‘good’ or normal? Well, make sure you remember it’s the patient’s fingers, not your fingers! I showed how to use a range of motion scale and the benefits of checking mouth opening objectively:

I am so excited to announce pre-registration for SplintCourse – Splints Simplified for GDPs. Sign up for the launch offer which is just weeks away!

I teach what I know, and I know Resin Bonded Bridges and Splints for GDPs as I have devoted my career to their study!

So here is a recap from AMPSA Part 1:

In this Episode I summarise:

These appliances can bring HUGE solution to a MASSIVE problem for our patients. Many of my patients are pain-free and no longe require painkillers for headaches and jaw pain. My strongest bruxists (whose teeth I have restored) are religious at wearing the appliance (despite a favourable occlusal scheme) and they love it and KNOW that their Dentistry is protected. This is not a cheap piece of plastic. It is a custom made Orthotic Appliance – I charge anywhere from £450 – £1,300 for appliances (simple AMPSAs, complex AMPSAs, Michigan/Tanner appliances – every case is different).

One of my previous delegates from The Splint Course (when it was delivered live) called in to the show and asked ‘I am concerned about charging a high fee for this appliance? What is the appliance does not work?’ – towards the end of this episode we discuss this in full depth!

If you enjoyed this episode, you will like why Michigan Splints are overrated!

Don’t forget to sign up to The Splint Course for an exclusive launch offer.

Opening Snippet: And patient number one might be like hey you place these anterior restorations for me and they keep breaking my fillings keep chipping my crowns are chipping i'm not happy versus the patient who's taken ownership of their bruxism and they're the ones who come to you and after they chip something they're like hey i'm so sorry and they're apologizing to you. They're not blaming you. They're blaming themselves. Why? Because they know.